We are in Chloride, New Mexico. 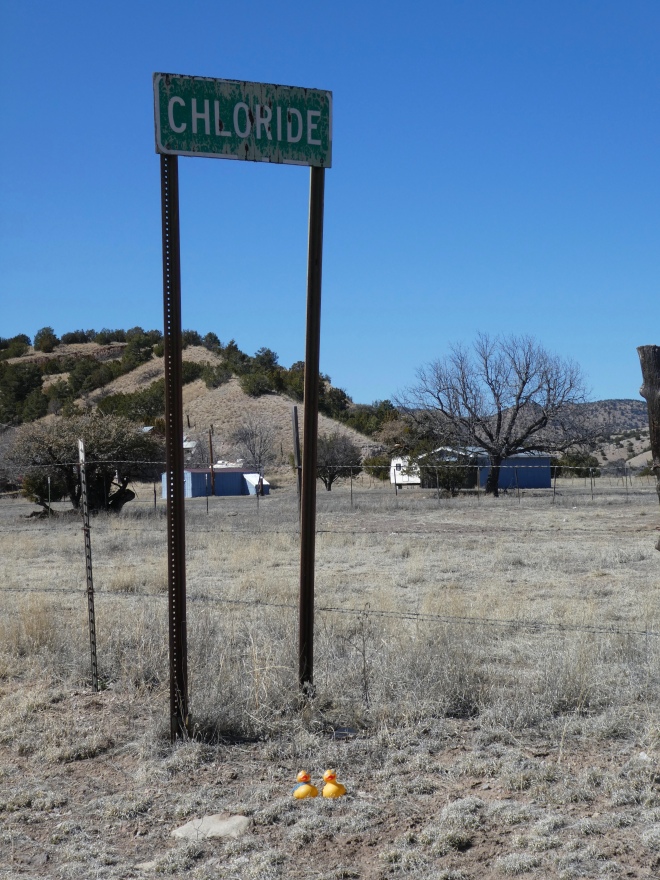 With our arrival the population increased almost 25%.   Just adding me, Zeb the Duck, Soapy Smith Duck, and mom.   In 1881 Chloride had 3,000 people, 8 saloons, three mercantile stores, two butcher shops, a hotel, boarding houses, an assay office, livery stables, a candy store, a drug store, a law office, a Chinese laundry and a millinery store.   The Pioneer Stage Line came into town, a post office was established and a newspaper was started.   And some brothels.   This was an active and rowdy silver mining town.   But when the mining ended, most people left.   Now it is a living ghost town with a permanent population of 13 humans.   About 27 original buildings are still here.

This native rock house, built with a steep pitched roof, has been able to survive severe hail storms.   This building was used for 30 years as Cassie Hobbs “doodle dum” or workshop.   It is now on New Mexico’s Register of Historic Places.  I, Zeb the Duck, would be happy to live in that native rock house.   It’s really pretty from the outside.   Check out this large adobe building.

Originally  Judge Edwin Holmes’ law office, later the post office, a barber shop, a church and dance hall and feed storage.   But in 1914 it was a Harley-Davidson dealership.   Now it is a wood working shop.   Quite a history for one adobe building.   And another native stone building. 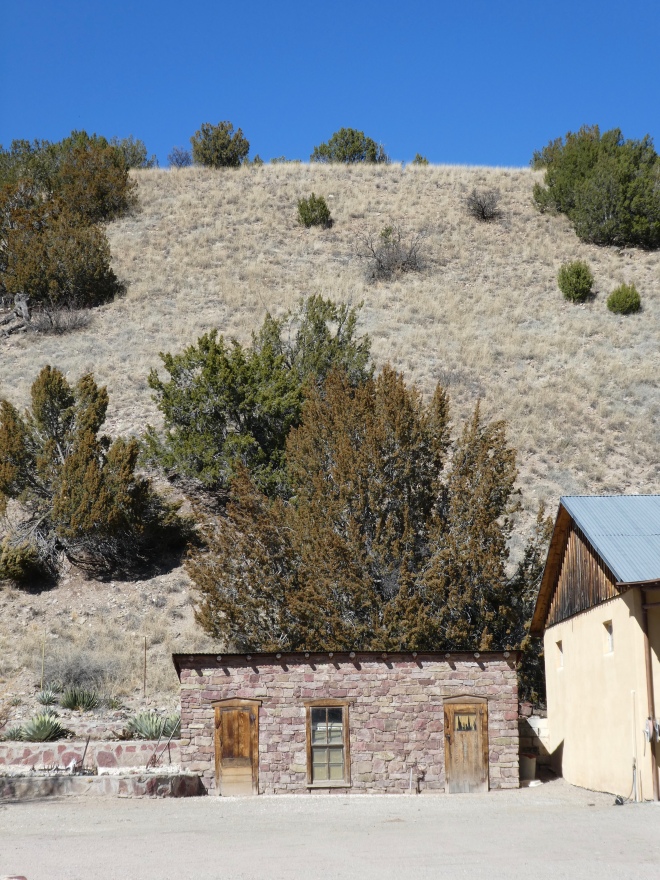 This was originally a chicken coop.  Then used as a residence and a temporary schoolhouse.  Some old-timers reported a working “still” in the basement during the 1930’s.  Before we left Truth or Consequences, we were given a great map of Chloride.   That is where we learned about the buildings and much of the history of Chloride.   Here is a tree in the road.

The sign, with us sitting on top, says Chloride National Forest.   But our map calls it the “hanging tree.”  Really?   Well, maybe not.  There is no record of anyone actually being hanged there, but miners and cowboys who had over indulged in the local saloons were tied to the tree to sober up.   Actually we ducks think that is a rather clever idea.   This building, close to the hanging tree, was one of Chloride’s early saloons.

Then became the post office until 1957 when the post office closed.   It is now private property and the building is being remodeled by its owners.  The name of the town, Chloride, was named for the type of silver ore that was found there.  Now the name makes sense to us.  The Monte Cristo Saloon and dance hall was also a popular place during the silver mining days.

Later the building was used as a schoolhouse and as local headquarters for various mining companies.   This building is also on New Mexico’s Register of Historic Buildings.   It is now a gift shop and gallery.  Chloride had a general store from 1880-1923.

In 1923, the owners covered the windows and locked the door, closing the Pioneer Store.   In 1998, under new owners, the store was cleaned and reopened.   All the original merchandise from 1923 was still on the shelves.   We visited with the daughter of the people who purchased and reopened the store.   It is now an interesting museum.

She allowed us to take a photo inside.   This is a fascinating museum to wander through.   So many things that are nearly 100 years old.   Left just like they were in 1923.   If you are in Chloride, don’t miss this museum.   Chloride is 40 miles northwest of Truth or Consequences, New Mexico, on the Geronimo Trail National Scenic Byway, so it is an easy day trip.  The residents of Chloride often visit Truth or Consequences to purchase groceries and other items.   Chloride feels like we were in a real silver mining town.   We think you would enjoy a few hours there.