Today we saw and fed kangaroos.   There were so many of them

So many kangaroos waiting for us

and they liked us.

We really liked them, too.    We were at Bonorong Wildlife Sanctuary between Brighton and Richmond, Tasmania. 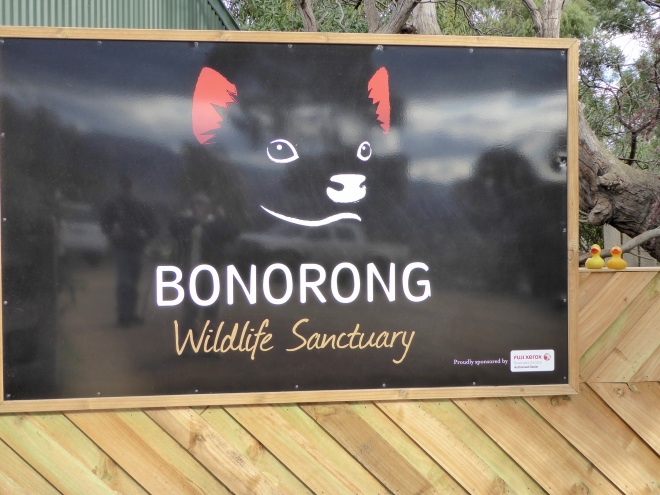 When we entered this sanctuary, each human received a bag of kangaroo food.   The kangaroos were waiting for us and looking for the food. 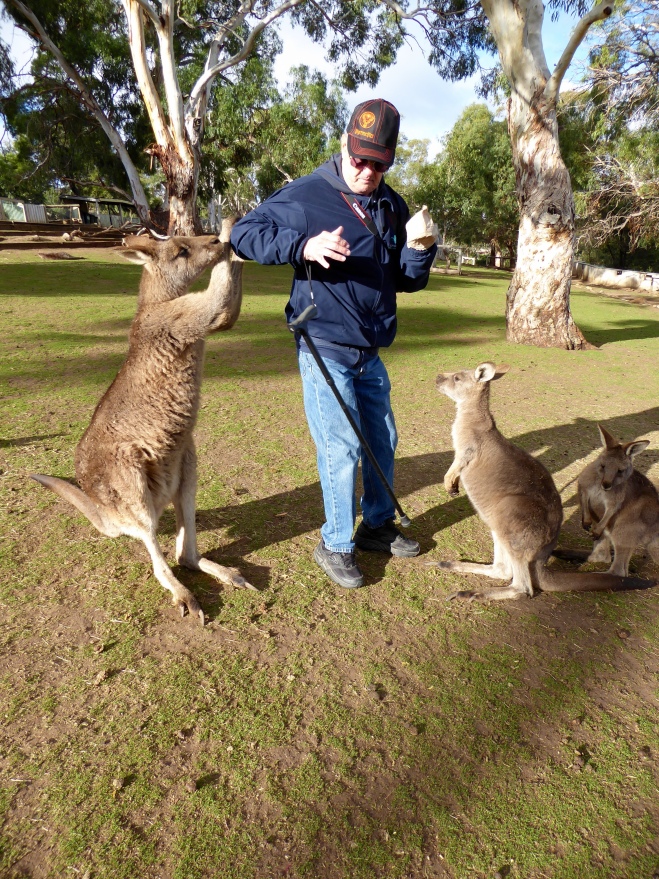 Human has food and the kangaroos want it

Aren’t they so cute?   Soon the wildlife tour began.   We first saw a wombat. 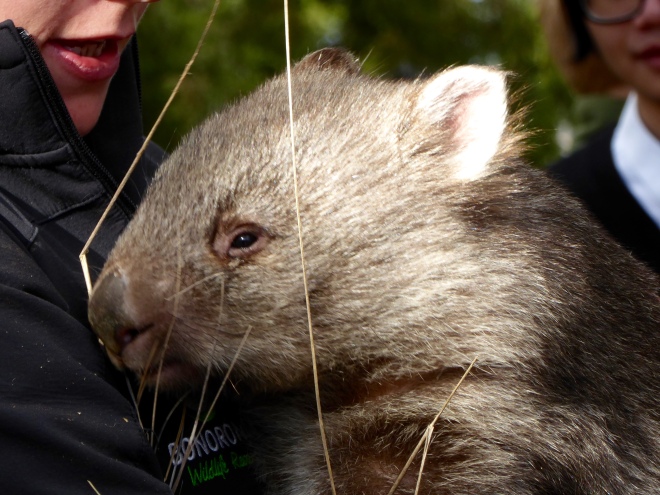 This wombat is so cute

These guys are strong, fast and not afraid to give a nasty bite if they want to be left alone.   Wombats live in burrows, and if a predator tries to enter, the wombat will allow the predator to touch his rump, and then the wombat will raise his rump and crush the predator against the roof of the burrow.    Wombats have broken human hands this way, also.   Here is another strange fact about wombats.  They have square poop which they place on elevated surfaces to mark their territory.   The square shape stops the poop from rolling away.

The wombat likes us

Scientists know they have square poop, they just don’t know how they make their poop square.   Next we went to see the Tasmanian Devils. 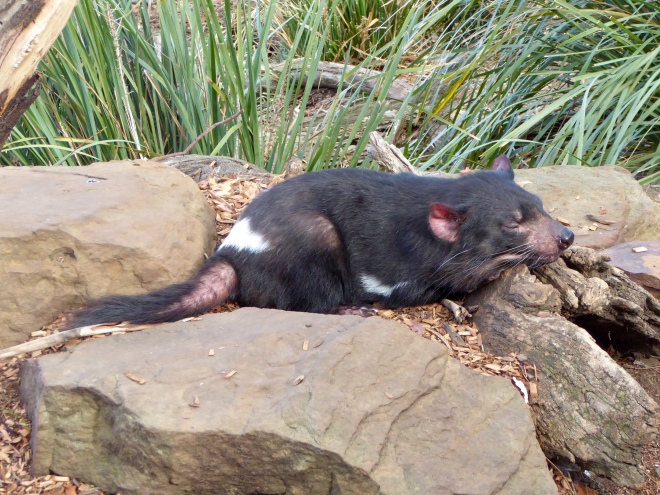 The Tasmanian Devils were the main reason for visiting Bonorong Wildlife Sanctuary.    The Tasmanian Devil is threatened because they have a rare form of contagious cancer.   They have Devil Facial Tumor Disease (DFTD).   So far there is no known cure for this disease.   These devils have a bad reputation because of the shrieking noise they make when eating.   The devils we saw were kind of cute. 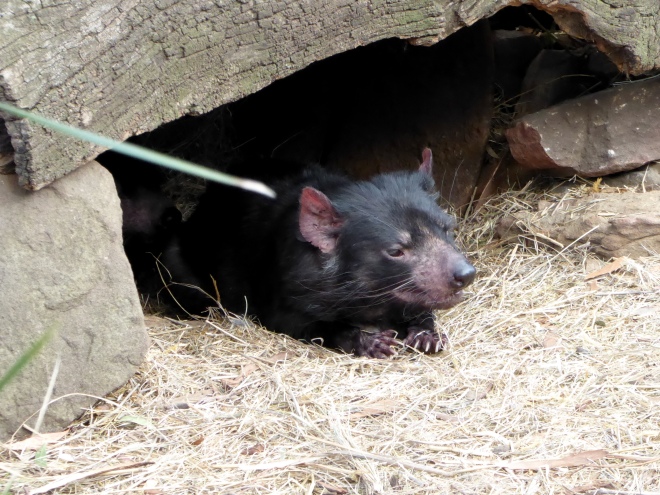 This Tasmanian Devil is coming out to see us

This one kept running around his enclosure.

This Tasmanian Devil was running a lot. He has nice red ears.

Here are the koalas.

One was in his tree, almost sleeping.

Koalas pass most of the time sleeping like this guy

The koalas were so cute, but they don’t move much.   This is a spotted tailed quoll.

He is having a snack.   There were also brightly colored birds.

So colorful and not in a cage.   Just a wild bird

We liked the Musk Lorikeet. 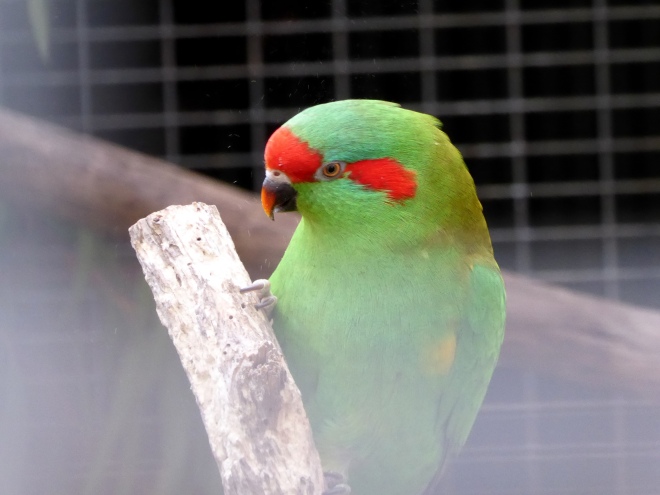 This is the only Lorikeet native to Tasmania.  The sulphur crested cockatoo is beautiful.

We saw many birds and other small animals, but the kangaroos were certainly the stars of the day.   This one has a baby, or joey in her pouch.

Mom with her baby “joey”

We think this kangaroo is our new friend!    For more information visit http://www.bonorong.com.au  You will love this place.

When the humans need a break, this is the place.

We are now in Hobart, Tasmania.

Arriving at airport in Hobart Tasmania

Tasmania is the largest Australian island and the most southern Australian state.   Today we are going on a cruise in Tasmania with Pennicott Wilderness Journeys.   We arrive at the docks in Hobart and then ride a shuttle to the boat dock near Port Arthur.   We are cruising to and around Tasman Island.

This is our cruise for today

We will not get off the boat, but we are excited because we will see amazing cliff and rock formations.   These rocks are millions of years old.   Here the rocks shifted during volcanic activity.   The shifted rocks make it look like the water is running downhill.

Result of volcanic activity. Water is not going downhill

A cave. Let’s go inside with our boat

Our boat is inside a cave. 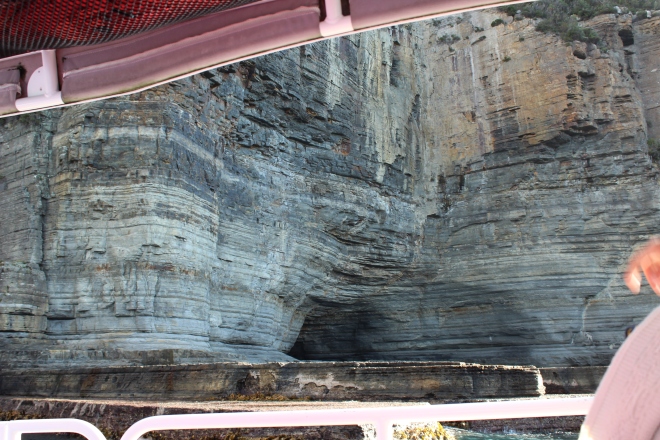 Our boat is in the cave

This is exciting for the Colorado Traveling Ducks.   We love waterfalls. 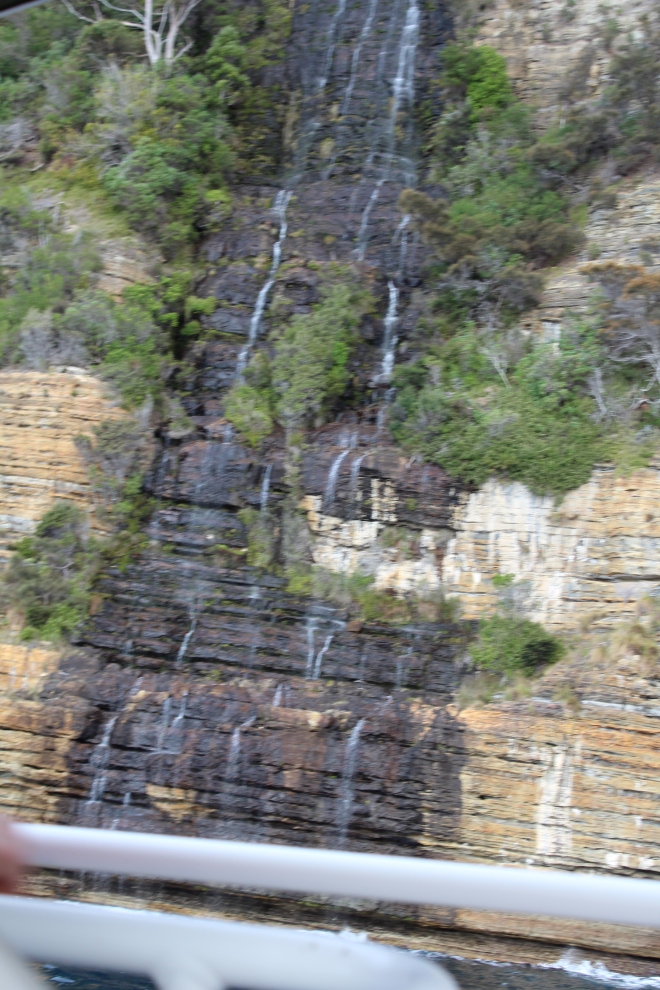 This is great!   This is the totem pole.

It is a favorite for experienced rock climbers.   Here we are at Cape Pilar.

We are seeing some of Australia’s tallest rock cliffs, while we are in Tasman National Park.   We ducks are on this cruise, but the caption said we could not sit on the rails; we must be out of the wind and surf.   We love this cliffs. 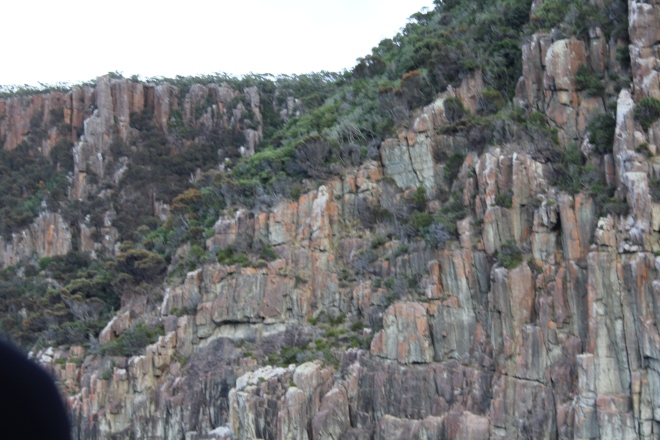 So majestic and beautiful

We are in our travel bag.   Next is Tasman Island.  There is a lighthouse at the top. 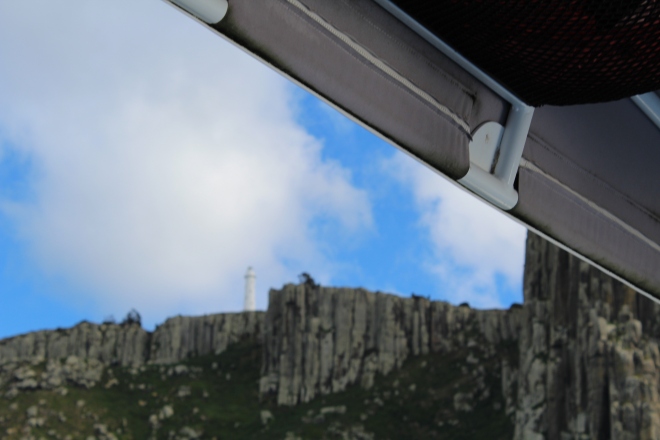 Lighthouse way up there

Here is the pulley system used to get people and supplies to the top of the island and the lighthouse and also to bring supplies and people from the top to the boats so they can leave Tasman Island.

Pulley system to and from lighthouse at top. On Tasman Island in Tasman National Park

On the way back to the rock, the weather changed.   The clouds came and the wind also increased.   The ride back was a little rough, but we loved it.   Our next stop for the day was at Port Arthur.

Port Arthur was a brutal British prison from 1832 to 1877.   Now it no longer functions as a prison, but many buildings remain.   We walked around the grounds.   The setting is beautiful. 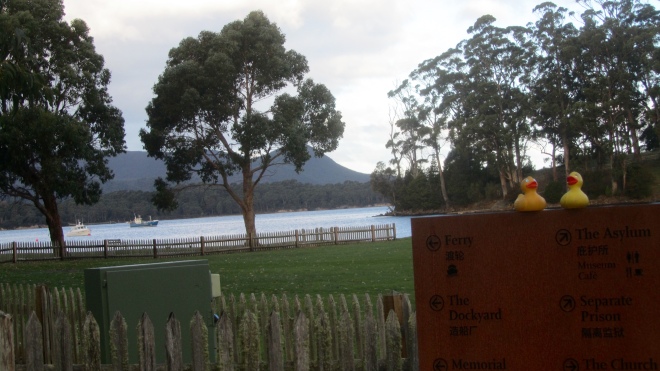 Now it is so beautiful and peaceful

We are happy this is no longer a prison.   We enjoyed our visit to Port Arthur and hope when you are in Tasmania you will also visit Port Arthur.   For more information about our tour visit http://www.pennicottjourneys.com.au

We are so lucky!   We just happened to be in Sydney, Australia for Vivid Sydney. 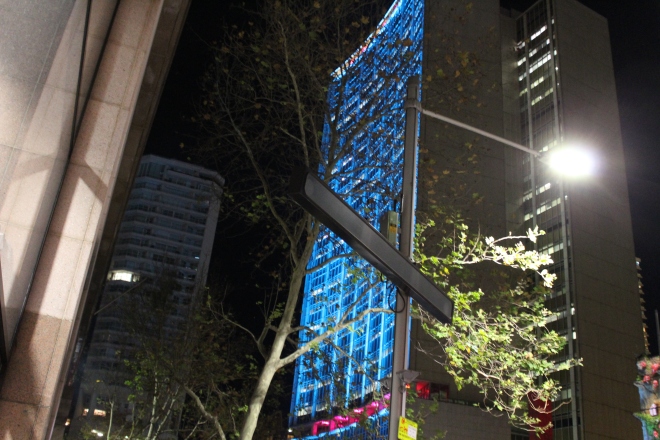 This is a celebration of light, music and ideas.

Between May 22 and June 8 2015, many buildings near Sydney Harbor and downtown Sydney have incredible light displays.

Near Circular Quay, the Customs House had a constantly changing light display based on Sydney’s flora and fauna.

Here is a sample of the light display at the Museum of Contemporary Art.

Of course, the star of Sydney Harbor is the Sydney Opera House.

We love the lights on the Opera House

The light show on the opera house was beautiful and so varied.

These are just a few of the displays on the opera house.

The lights were always moving and dancing, so some photos are better than others. 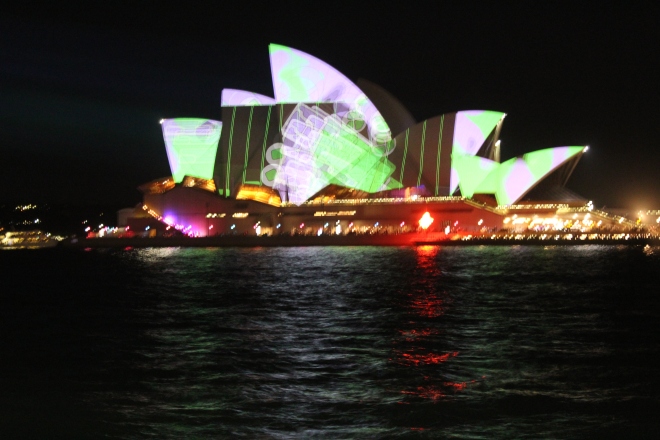 There were many people wandering around in the evening, enjoying the lights and sounds.  This gold pig was great, and it was our first gold pig.

These lights were also very pretty.

We really liked Vivid Sydney.   We hope you experienced it also.   If not and you are planning a trip to Sydney,we hope you are here for Vivid Sydney next year.

We are getting on a boat!   This is a hop on hop off ferry in Sydney Harbour.   It works just like the hop on hop buses in many cities. This ticket is good for 24 hours.   Here is a Sydney Harbour National Park.   This is Fort Denison.

At Fort Denison, tours are available and a wonderful buffet may be purchased and enjoyed, right in the middle of Sydney Harbour.   Fort Denison was built in 1855 for protection.   It was probably never used for that, but it is rumored to be a  place of torture for penal use.    Here is the entrance to Taronga Zoo.   To reach the zoo, humans take aerial lifts to reach to the top of this hill.

Our next stop was Watsons Bay.

This is a popular destination with tourists and the residents of Sydney.   The many restaurants attract humans and so many seagulls.   The beach looks inviting. 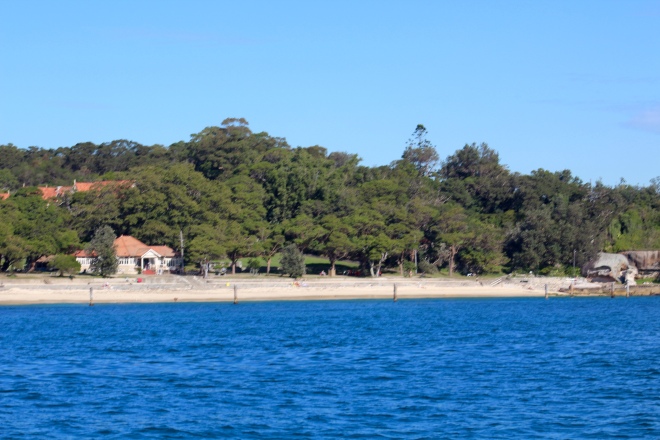 This is the Dunbar House.

This restored building provides breakfast and lunch in a beautiful setting.   Dunbar House is also available to rent for special occasions.   The next stop was at Manly Bay.   We went into the Tasman Sea to get here. 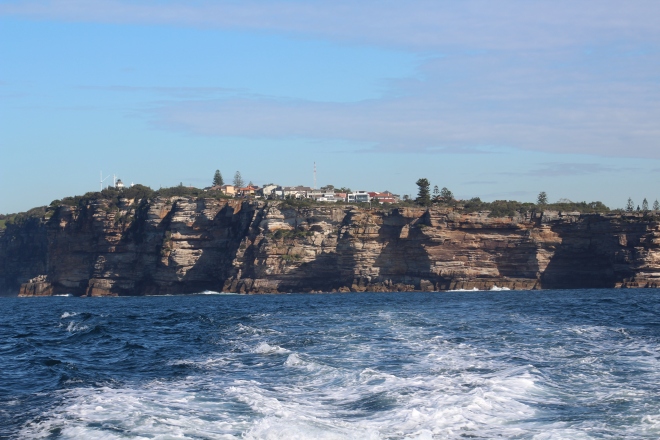 Passing this light house, the cliffs of Australia are very dramatic.

Arriving at Manly Bay, we realized this also is a popular destination.   There were hotels, many restaurants and lots of water activities.

We, like many others, really like Manly Bay.    We really liked this memorial to the lost ships and the lost humans.   We always appreciate memorials for those that have died. 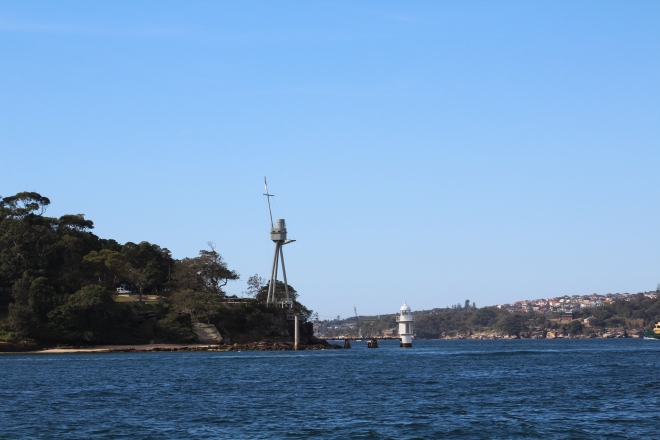 Remembering those ships and humans that have been lost to us.

Our next stop was Darling Harbour.   Darling Harbour is home to the Sydney Aquarium.   This also is a great shopping and dining area.  We walked around and took a short refreshment break.

On the ride back Circular Quay, we passed Luna Park.   This is an amusement park. 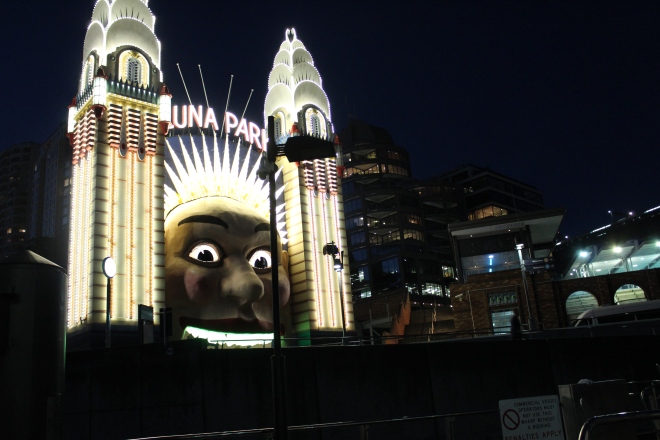 We did not get off the ferry, but it was dark and we really liked this ferris wheel with lights.

We enjoyed the boat ride back to Circular Quay.   We like Sydney Harbour a lot.

I, Zeb the Duck, went with mom to Denver International Airport.

We took suitcases and travel guide books with us today.

Camera and guidebooks inside

Here we are at the airport watching our airplane getting prepared for us. 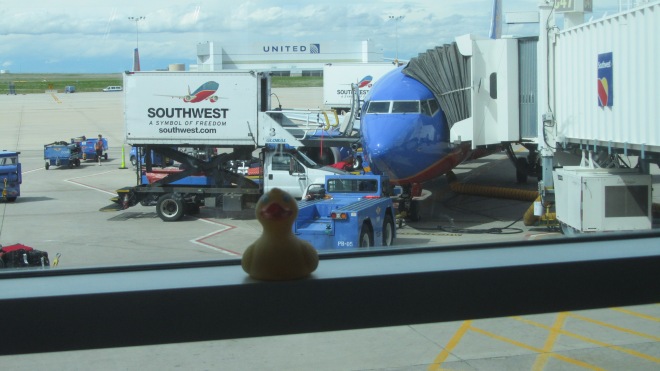 Our plane getting luggage, fuel and lots of snacks

Where are we going today?   Looks like our plane is going to Los Angeles, California. 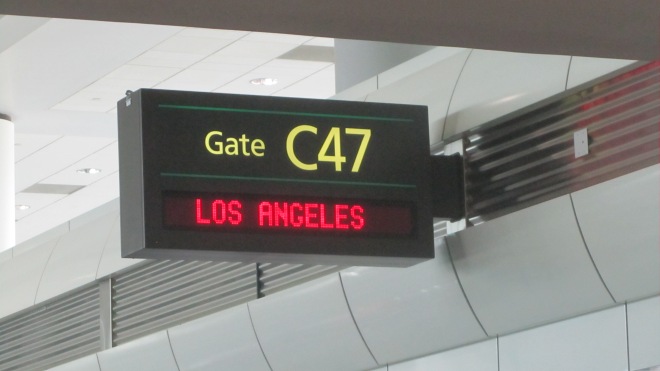 OK,   I am ready to go.   We are now in Los Angeles, we got our suitcases, but we are not done traveling yet.   My Alaska cousin, Eider Duck, is in Los Angeles too.   Now we check in again and our suitcases will go to another airplane.

We were on this airplane for a long time, over 12 hours.   We are comfortable sitting in these big seats.

Plenty of room in this seat

When we wanted to sleep, our seats reclined flat to a bed.

Easier to sleep on long flights.

Very comfortable for the Colorado Traveling Ducks and humans.  Leaving the plane, we went through customs and immigration and took a taxi to our hotel.   Humans and ducks walk around and look at this.

What a great bridge

Cool bridge.   And this is an Opera House.

That is the Sydney Opera House!!

We are in Sydney, Australia.  The humans have been here before, but this is the first for Zeb and Eider.   Hope you will stay with us as we explore Australia.

Zeb the Duck and Soapy Smith Duck stopped at the Arvada Center in Arvada, Colorado. 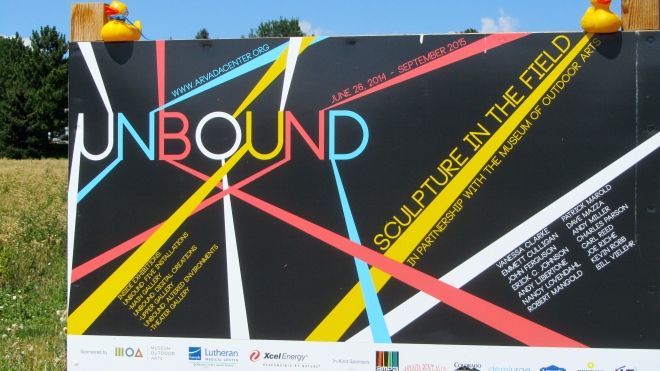 Unbound Sculpture in the Field

We walked on paths through the field near Denver looking at sculptures.  Local artists did several of these works and many are for sale.  We want to show you some of what we saw. 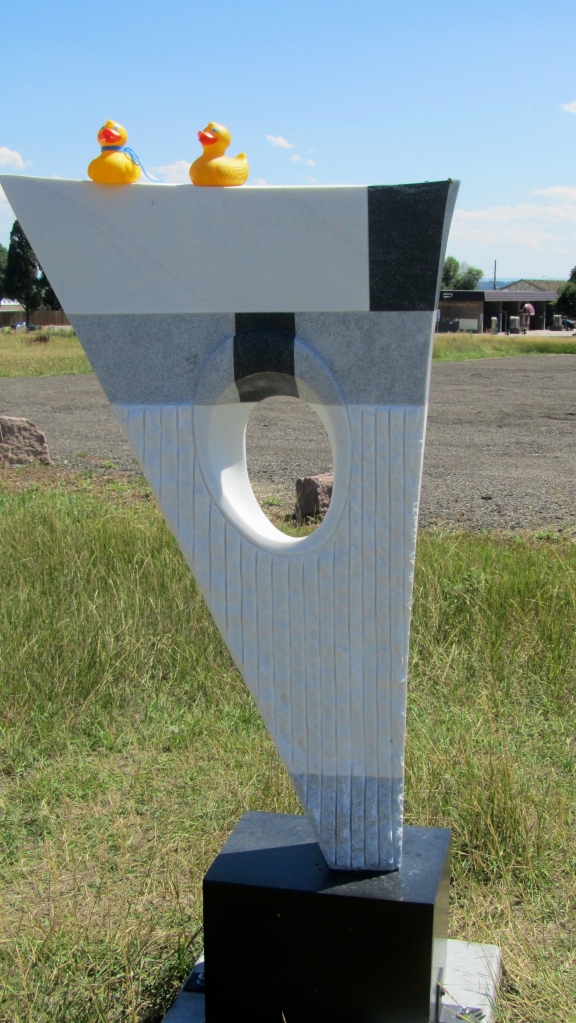 Also in aluminum by Bill Vielehr is Metal Response 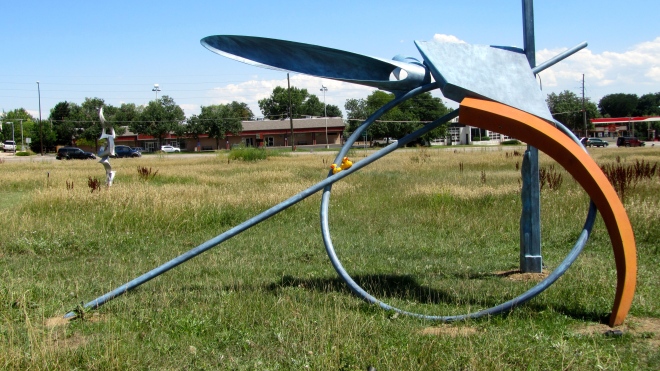 Tetrahedralhypersphere is from oxidized steel and created by Robert Mangold 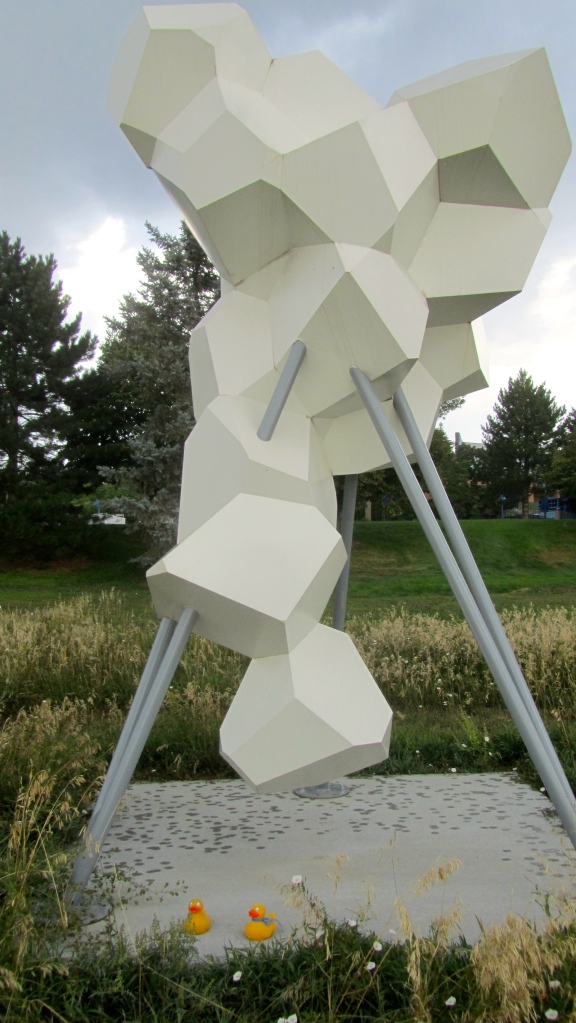 Fractal Echo is made of carved and sandblasted limestone, concrete and steel foundations.  Nancy Lovendahl is the sculptor. 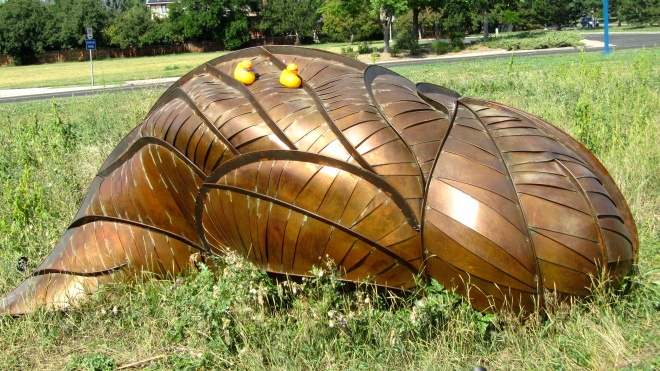 Second Wind by John Ferguson is made from steel.  There are many more sculptures, but this is the last one I will show you today.

There are 27 works exhibited here.  Some artists have more than one piece.  We think they are worth looking at and hope you do also.  The sculptures will be on display until September 2015.  You really should see these. For more information visit www.arvadacenter.org