We are going to the beach!   We ducks love all the activities and exploring in old towns, but the beach is our favorite.   Isla Verde Beach is our place today.   First we rent beach lounge chairs and umbrellas.   We have never seen this.   We pick our spot on the beach and the gentleman uses a drill with a wide, long attachment to dig a hole to secure our umbrella in the sand. 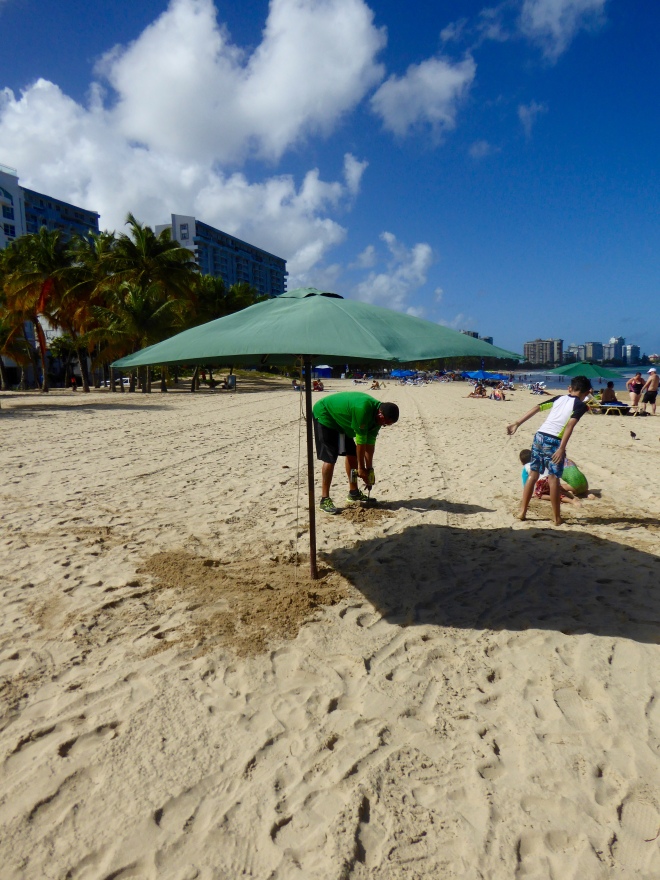 Now the umbrella is firmly anchored in the sand, but extra ropes are needed to protect our umbrella from the wind.

Since we needed two umbrellas and four chairs, how did he carry them to our favorite spot?   On this lounge chair, adapted with large sand wheels.

Tools of the trade

You can also see the drill and long attachment behind the carrying chair.  This man really knows what he is doing. The chairs are arranged, water bottles available, and we are ready for a day of sun, sand, water and fun.

Sitting on the beach, we enjoy the soft sand. 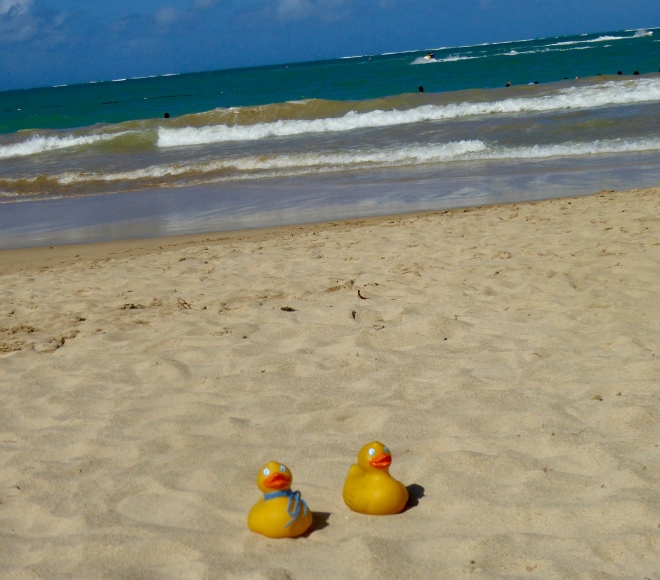 We love the sand and water

Time to rent jet skis now.   Jet skis are so much fun.   Each human gets a separate jet ski.   It is more fun to drive.   Here is Bucket’s dad driving his jet ski. 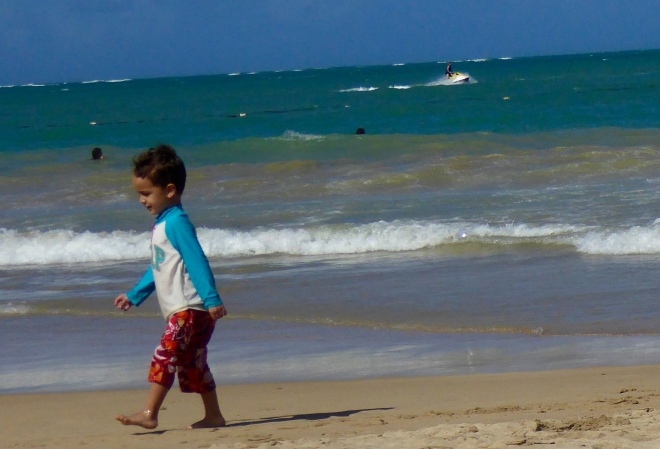 Bucket’s dad on a jet ski

Warm sun and beach activities do make humans and duck hungry and thirsty.   Not to worry.   A food stand is right behind us on the beach.

Food and drinks are near

We have a lot of food now, so Bucket’s mom is sharing with some new friends.

There are many water activities available at the beach.   These are kite boards. 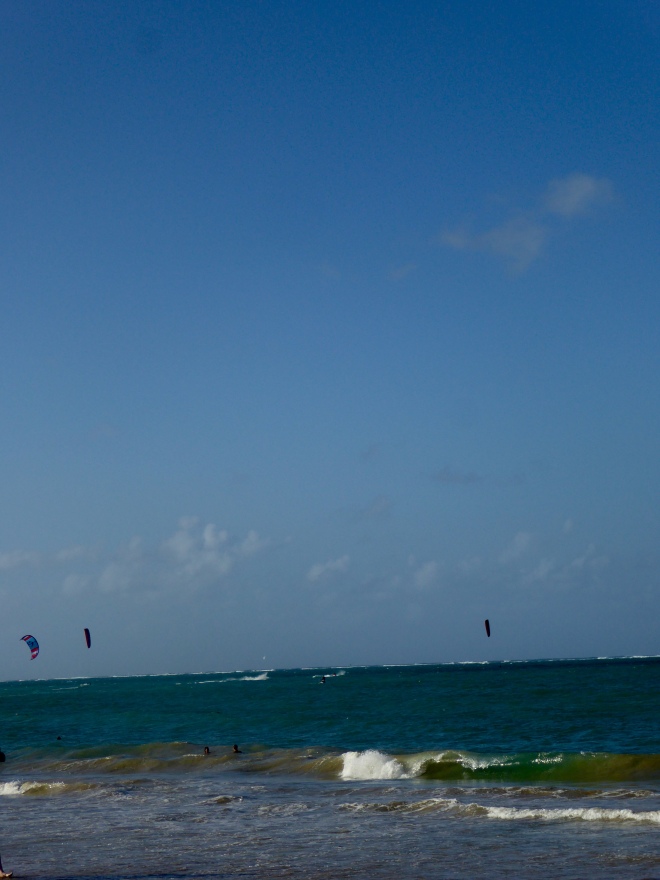 The kites are so colorful and look great sailing above the water.   We did not try them today.   Maybe another time.   You can see there are many people enjoying Isla Verde Beach today, but it really is not crowded.

This is a big beach.   This is our last day in Puerto Rico so we are all happy to spend it at the beach.   But we are getting hungry again.   Let’s try some real Puerto Rican food for our last evening.   Nearby at Los Platos restaurant, we order mofongos.

These are green mashed plantains.   One has chicken inside and one has beef inside.   We have a choice of white garlic sauce or Puerto Rican creole.   We tried each sauce.   Three of us had mofongos and one had a delicious fish dinner.   This meal was very tasty and a great way to end our Puerto Rican vacation.

Who are these people?   What are they doing? 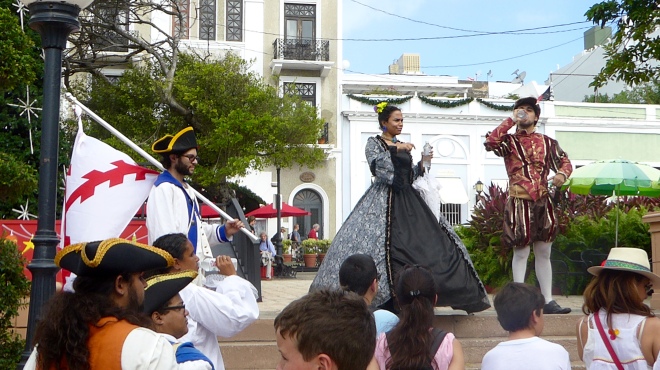 Here, in the Plaza de Colon in Old San Juan we found Ponce de Leon, the first governor of Puerto Rico.   Searching for the Fountain of Youth, in Puerto Rico and in the American state of Florida, today he is promoting benefits of drinking clean water.   It must work, he was born in 1474 and he looks pretty good.   A short walk took us to the Franciscan Chapel, built by the Third Order of Saint Francis. 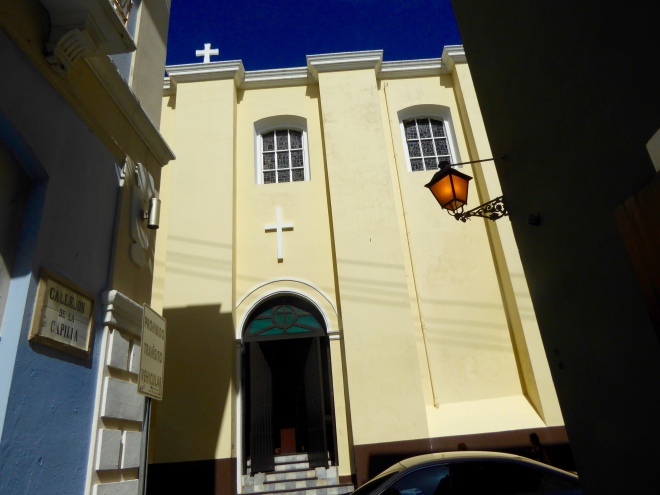 This is not the most popular church, so it was almost empty. 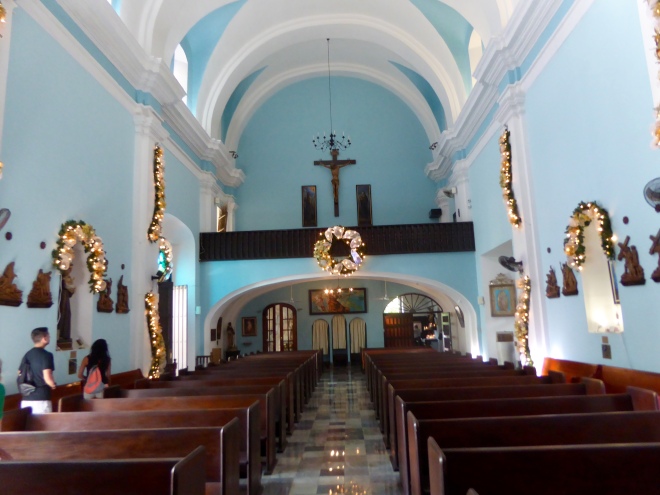 But so beautiful and made humans and ducks feel at peace.   On the walls, the Stations of the Cross, were intricately carved.

Station of the Cross XI

This is number 11, the nailing of Jesus to the cross.   Much of Old San Juan features restaurants and tourist shops.   But, it is part of the city and many people live here.   From the 1500s, the cobblestone streets are quite narrow. 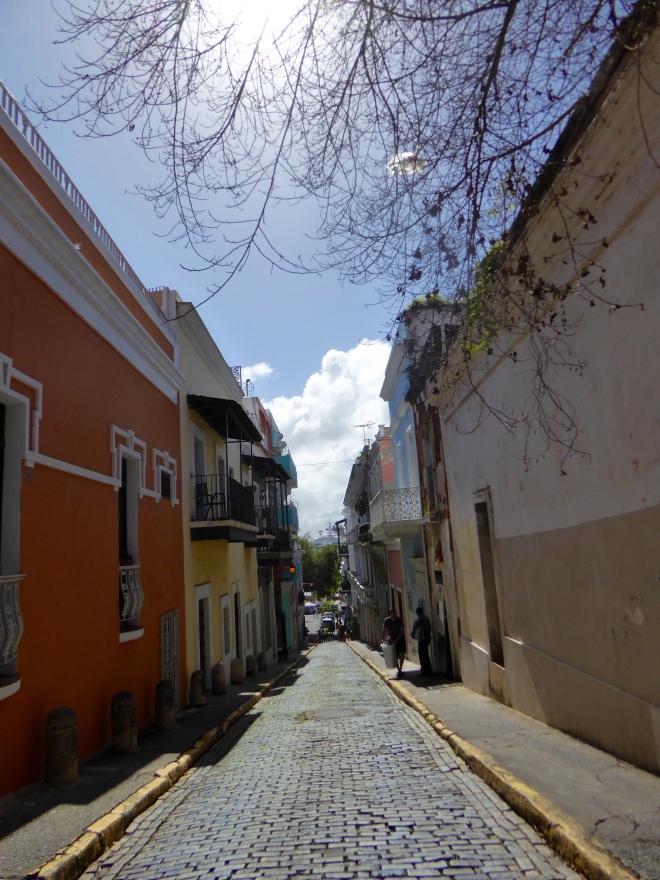 The humans just wanted to wander down these streets, not wanting to eat or shop now.   On the main, wider streets, tourist buses take people between the two Spanish Castillos that we previously showed you.   Also taking humans to the cruise port.   Yes, the cruise ships leave from this area also.   Look at the decorations on this bus.

From the bus, we saw the government building for the Commonwealth of Puerto Rico, flying the flag of the United States of America.

Some people in the world are trying to reduce their life, their possessions, and reduce their carbon footprints.   This house does that.   This little house is only 5 feet wide. 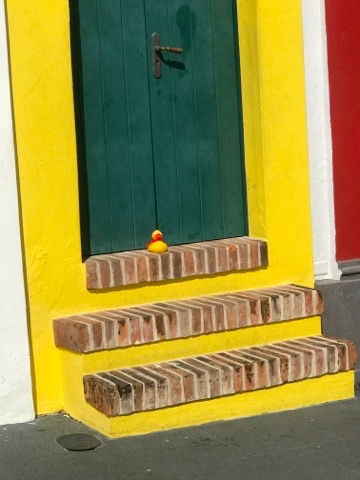 Little house is only 5 feet wide

That really is little.   Not everybody wants to live in a space that small though.   On this narrow street, the apartments are fairly small, but the curved balconies seem wonderful. 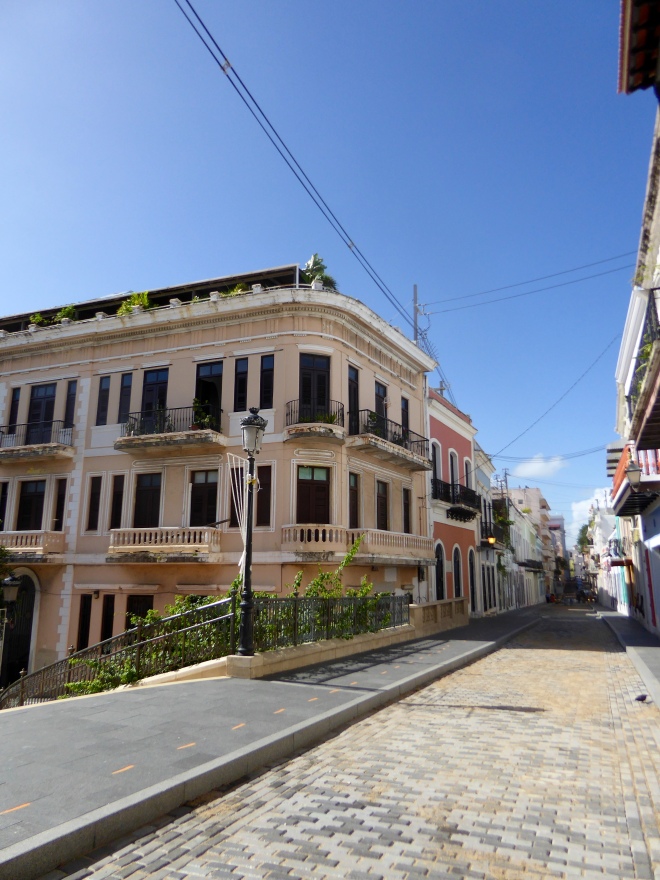 And, no buses on this street.   You could spend several days exploring Old San Juan, but we were only here for one day.   We loved it, but we wanted to go to the beach.   We will take you there next time.

Canons were once housed here, to defend the Spanish claim to Puerto Rico. 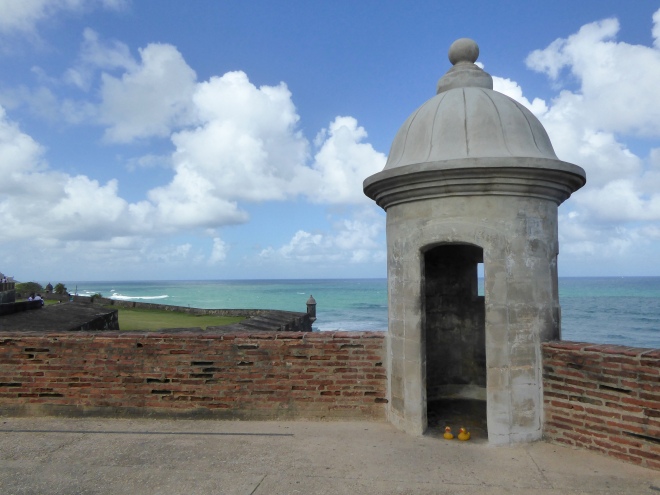 Let’s walk up this incline and enter the fortress.

Looking to the sea, this fortress offered an advantageous view of the sea and the land.

View of Atlantic. Love the colors of the water

As we enter Castillo San Cristobal, we notice we will be climbing more inclines.

This Castillo has three levels.   We are on level 1, sitting on the window of the Troops Quarters.

Remember that ships sailing from Europe, 4,000 miles to the east, sailed down the coast of Africa where they used the winds and currents to reach Puerto Rico, and then on to the rest of the New World.   We are now on the top level, and it is windy here.

These three flags flew over Puerto Rico.   The bottom is the Burgundy Cross.   This was the Spanish military flag that flew here during most of the Spanish colonial period.    It was adopted in 1506 by Philip the Handsome, King of Castile, to honor his mother, Mary Duchess of Burgundy.   The middle is the flag of the Commonwealth of Puerto Rico.   And the top flag is that of the United States of America.   Here is the bell. 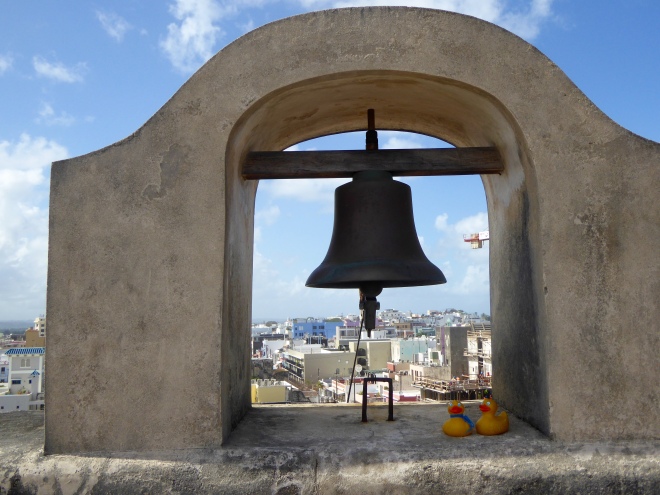 We love the old bells.   From here, you would be able to see any approaching threat, by sea or land. 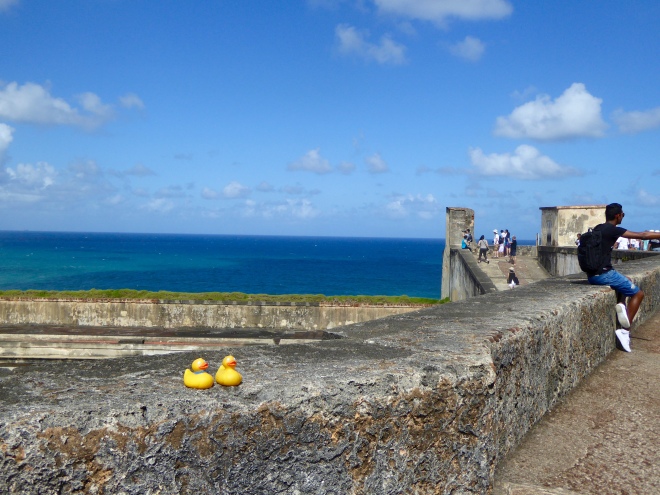 View to the east

We like this panorama of the coast between the two Castillos.

Panorama with markings on building roofs

This is a favorite photo from Bucket’s dad.   Looking toward Castillo San Felipe del Morro, again we admire the strategic location of these fortresses.

View to the west and Castillo San Felipe del Morro

We, the Colorado Traveling Ducks, and humans enjoyed exploring and learning about our history and the Spanish defenses to protect Puerto Rico.   We think you would enjoy wandering through this part of Old San Juan, also.

This is our first full day in San Juan, Puerto Rico.   Our cab took us to Old San Juan, the original walled city of San Juan, Puerto Rico.   Christopher Columbus arrived in San Juan in 1493 on his second voyage to the New World.   For Spain, he claimed all the riches of what is now called Puerto Rico.   This included gold, silver, gems, and spices, in addition to the first deep water port between Europe and the New World.   Puerto Rico is a territory of the United States and Old San Juan Historic Site is under the protection of the U.S. National Park Service.   There are two old fortresses, built by the Spanish, here.   The Castillo San Felipe del Morro was to defend against attacks from the sea.   The Castillo San Cristobal, about a 30 minute walk away, was built to defend against attacks from land.   We, the Colorado Traveling Ducks, will show you Castillo San Felipe del Morro today.

Here is the sign. Where is Castillo San Felipe del Morro?

We can see the lighthouse in the background, and realize we have a long walk ahead of us.   This cemetery was conveniently located on the coast near the Castillo. 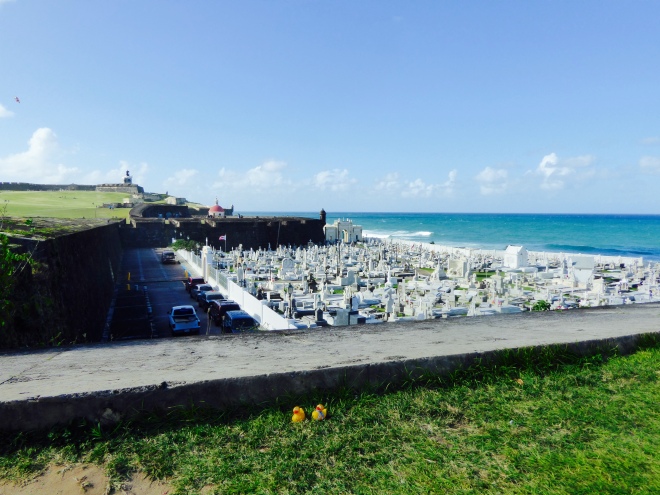 Cemetery by the sea

The city, like many old cities, was protected by a wall.

Looking through the wall

Today we have a peaceful view through that wall.   The grass here was incredibly soft in places. 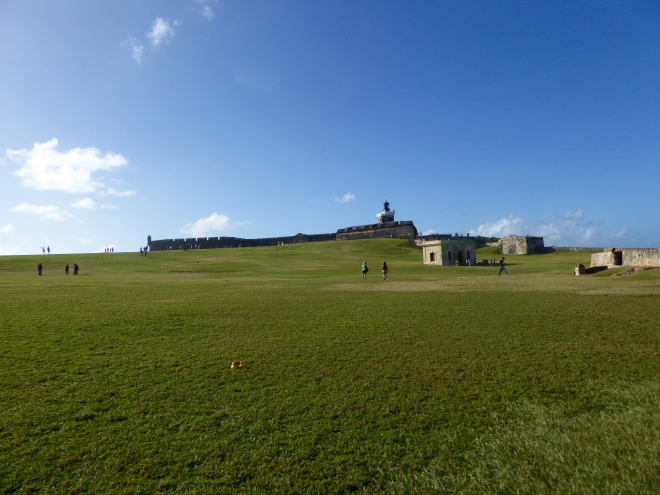 This was once a golf course, but we still must keep walking.   We think this building, built partially underground is interesting.

Bucket claimed this chair and seems to be enjoying a short rest.

This space, once the living quarters for the commander of El Morro, but later, a place of punishment. 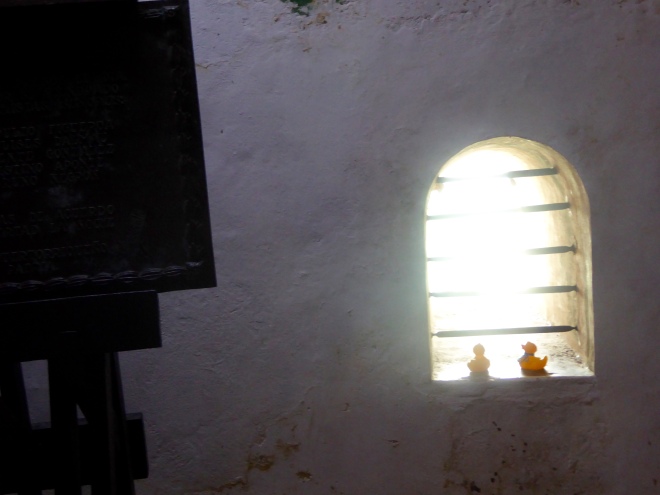 In jail. Looking through bars to the sea

Zeb and Soapy enjoy the view, through the bars, of the sea.  Bucket found another prison cell. 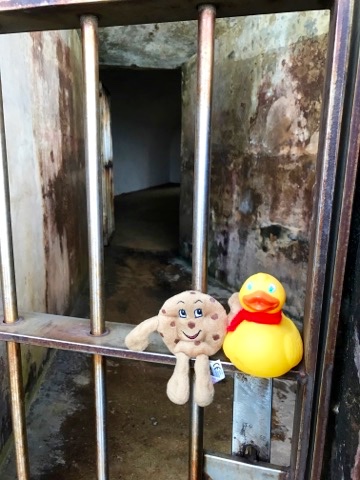 Bucket and Chip–don’t go inside that prison cell.

Don’t go inside there, Bucket and Chip.   We found this canon, now inside a room.

Canon. No longer in use

But it was not always inside this room.   This path takes us to the former home of the canon.

Where the canons used to be

The canon was pointed through this lookout. 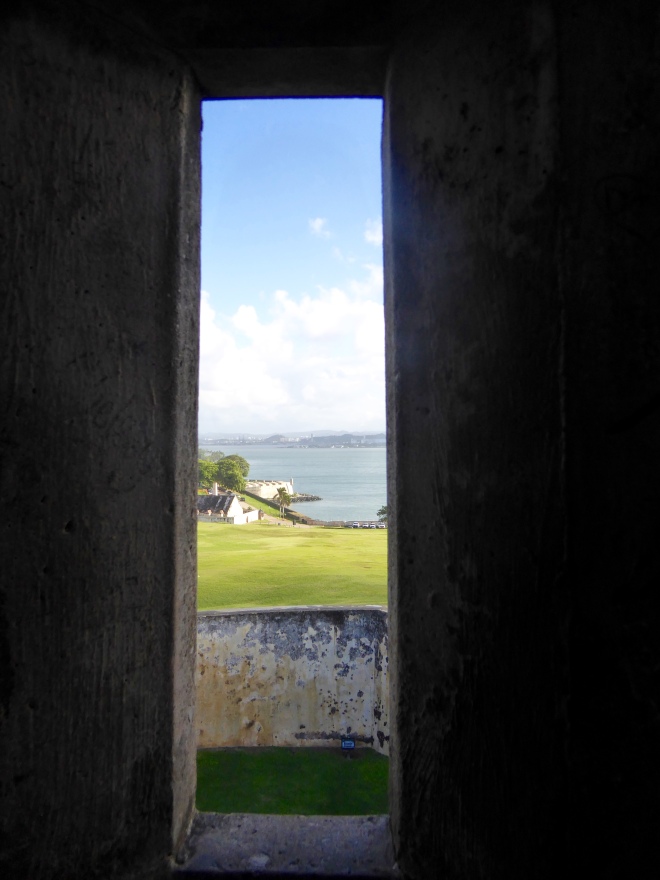 Canon pointed out this space

We ducks wanted to sit on the ledge, but the humans said it was too windy for us.   But we love to watch the water.   Castillo San Felipe del Morro has six levels and we found the bell on the 6th level. 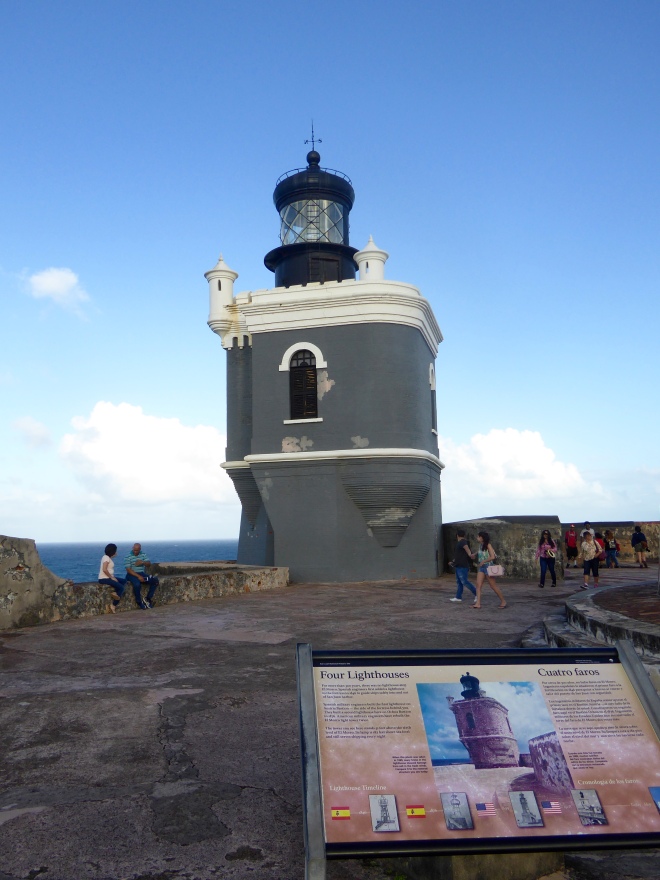 It is the fourth lighthouse built here.   This one is 51 feet above the 6th level of El Morro.   The lamp is 182 feet above sea level and this lighthouse and lamp still serve ships every night.   This lighthouse was built in 1908.   Originally made of bricks, it was restored in the 1990s.   We ducks are impressed by this castle.   But we are also impressed and a little frightened by the wind here.   We like the sea, but we don’t want to be blown into it and lost forever.   The humans kept us safe.   More about Old San Juan next time.