These two phenomenal fighters accidently met at a Miami Heat basketball game.   Both were sitting courtside in Miami.   They met after the game and committed to having this fight. 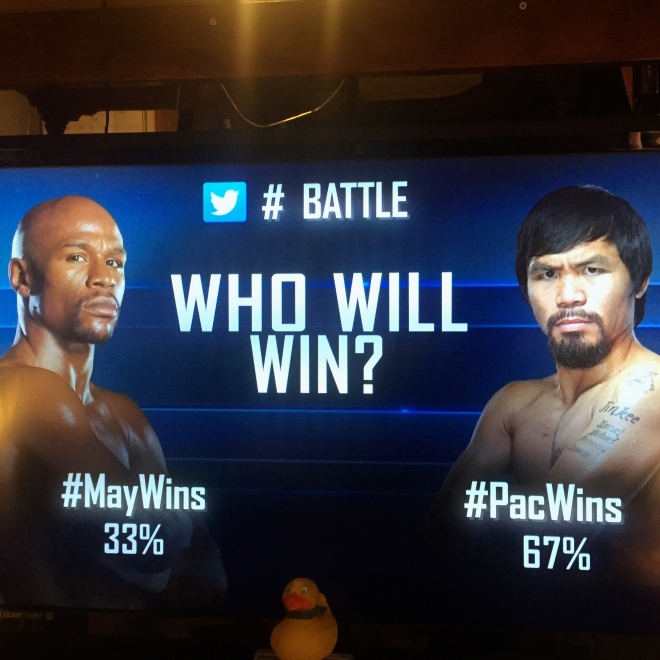 The fight was delayed because so many people ordered pay per view television coverage; the networks were overloaded.   But the fight did begin!   Manny Pacquiao entered the ring first 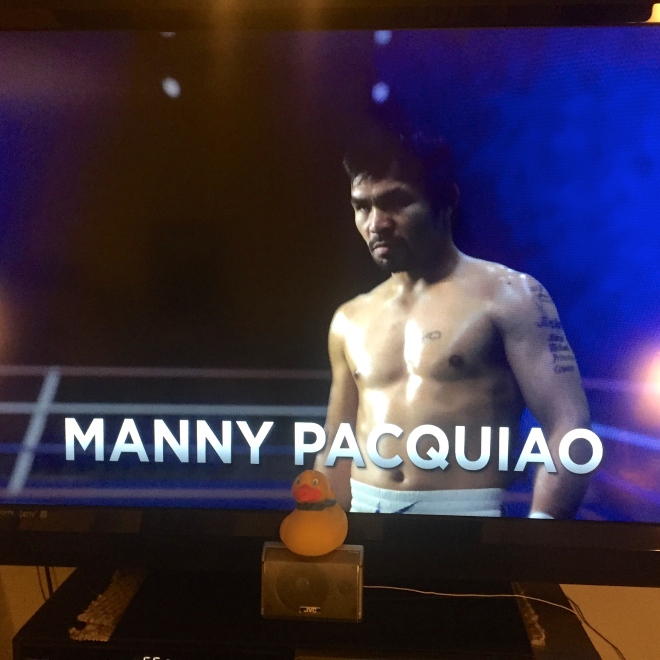 and then stopped to take a selfie.   Floyd Mayweather then entered the ring.   Manny Pacquiao was born December 17, 1978 in the Philippines and still lives there.   In May 2010, at age 32, he was elected to the Philippine House of Representatives.   He has been involved in basketball, acting and is a retired singer.   Pacquiao is the current WBO welterweight champion.     Floyd Mayweather, Jr was born in Grand Rapids, Michigan into a family of boxers.   He is currently undefeated.   He is also the current WBC, WBA and Ring welterweight champion.   This fight has been called the fight of the century.   Soapy is watching the fight at home with his mom and dad.   They ordered pay per view and they will have a good time watching the fight and yelling at the television.  The television announcer are discussing the fight. 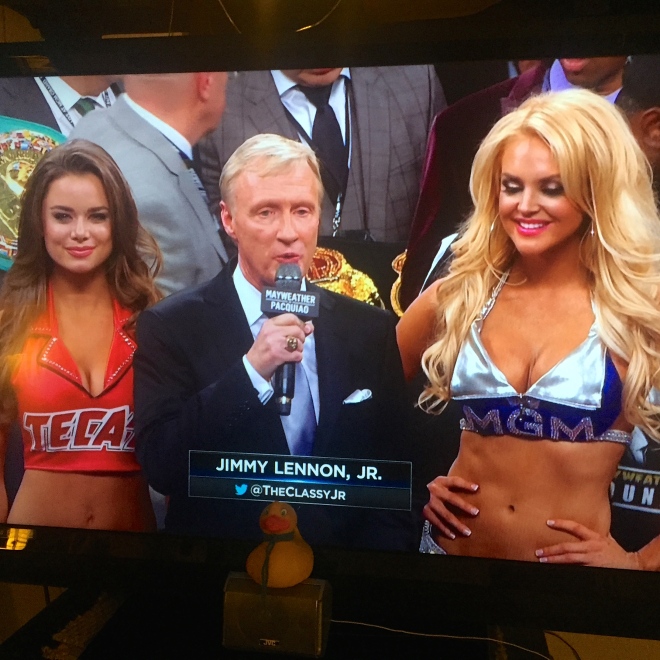 He enjoys his job

Let’s turn our attention back to the boxing ring.

The lights accentuate the boxing ring

It is time for the fight to begin!

This is exciting for Soapy.   He sometimes watches fights with his humans, but this is THE FIGHT.

Round One. The spectators and officials decided this round is Mayweather’s.

After twelve full rounds, the judges have made their decision.

Floyd Mayweather is the winner and champion!

Floyd Mayweather is the winner in this unanimous decision.   Congratulations Floyd!

One of the first people in the ring after the fight was Fred Sternburg.   Fred is Manny’s promoter and Fred lives in Englewood, Colorado.   Englewood is a southwestern suburb of Denver.   Fred has been to the Philippines numerous times and has gone on world tours with Manny Pacquiao.   Fred was responsible for Manny being on Jimmy Kimmel Live last week.   That was Manny’s 9th appearance on Jimmy Kimmel Live since 2009.   Fred wants to broaden Manny’s appeal to an audience that doesn’t necessarily watch boxing.

Floyd Mayweather won the boxing match with the unanimous decision from the judges.   Mayweather had planned to retire soon and Saturday after the win, he said his last fight is in September.  Soapy and the humans hope he can retire undefeated.   Soapy Smith Duck likes to watch a good boxing match.   These two fighters were talented boxers, not street fighters.   Soapy congratulates Floyd on a great fight!