I, Zeb the Duck, and Soapy Smith Duck are taking a road trip.   We love road trips!  We never know exactly where we will go.   This time we drive to Nebraska. 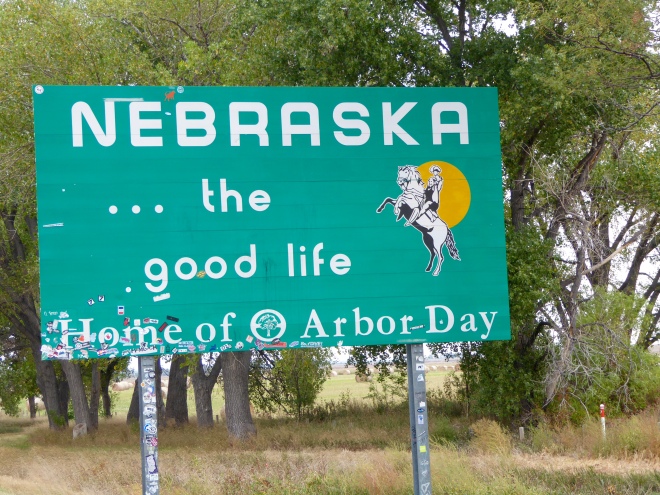 We are in Nebraska

As we expected, there are farms and rolls of hay here. 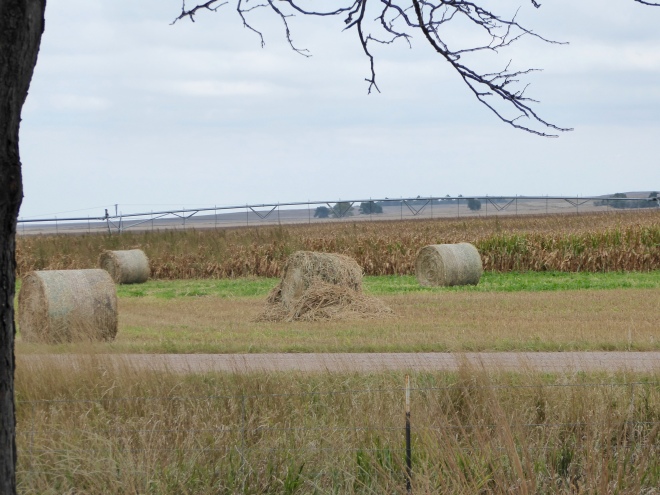 We think this farmland looks pretty and peaceful.   We entered Nebraska from Colorado on I-76.   That road is now I-80.   We leave the highway at Exit 145, and drive across the South Platte River 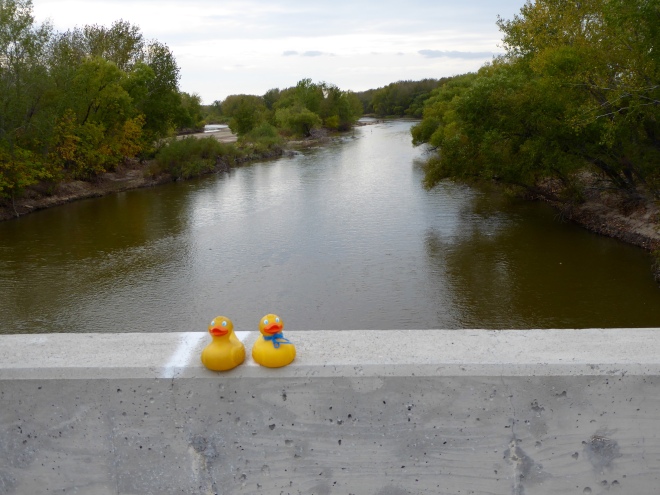 and into the town of Paxton. 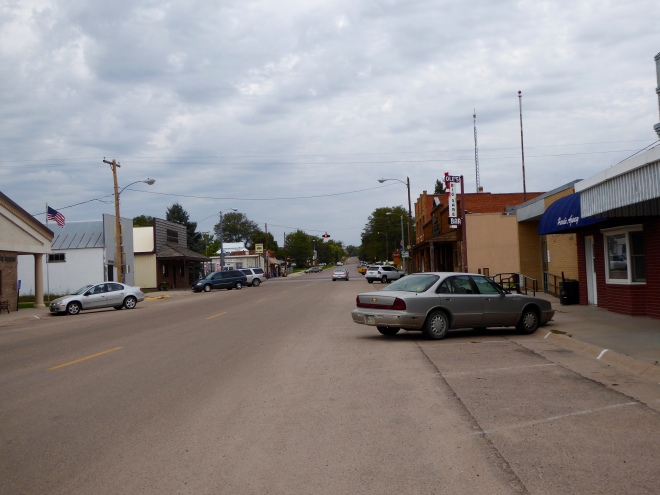 In the middle of the afternoon during the week, there are not many people there.   Mom says we are going to eat a little now.   We stop at Ole’s Big Game Steakhouse. 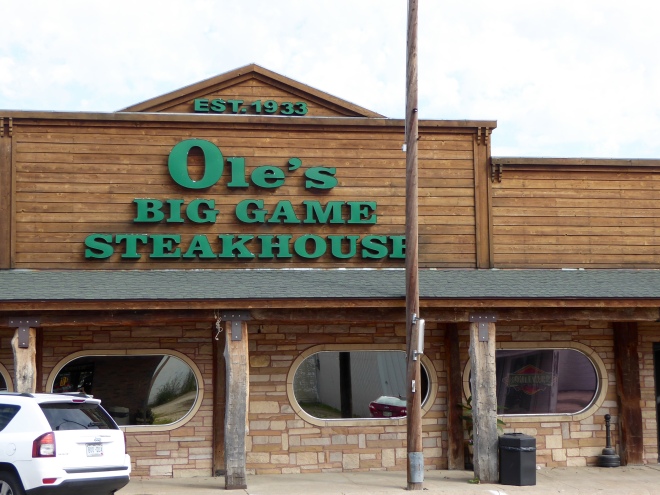 This is not like our usual lunch stop.  First we look at the side of the building. 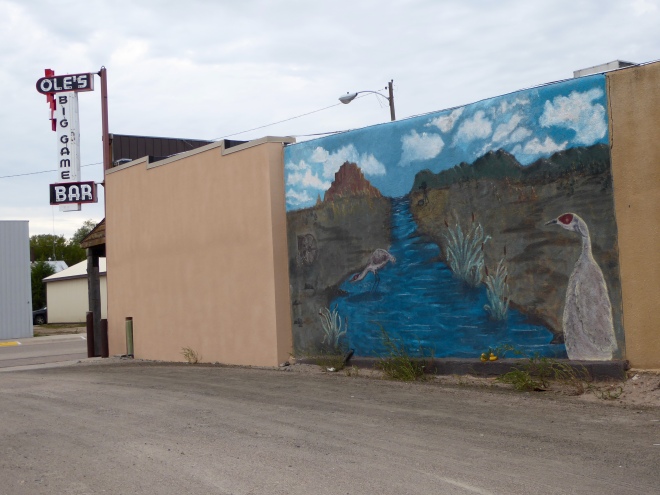 We like buildings with murals painted on the side.   As soon as we enter, Soapy and I know this is a different decor. 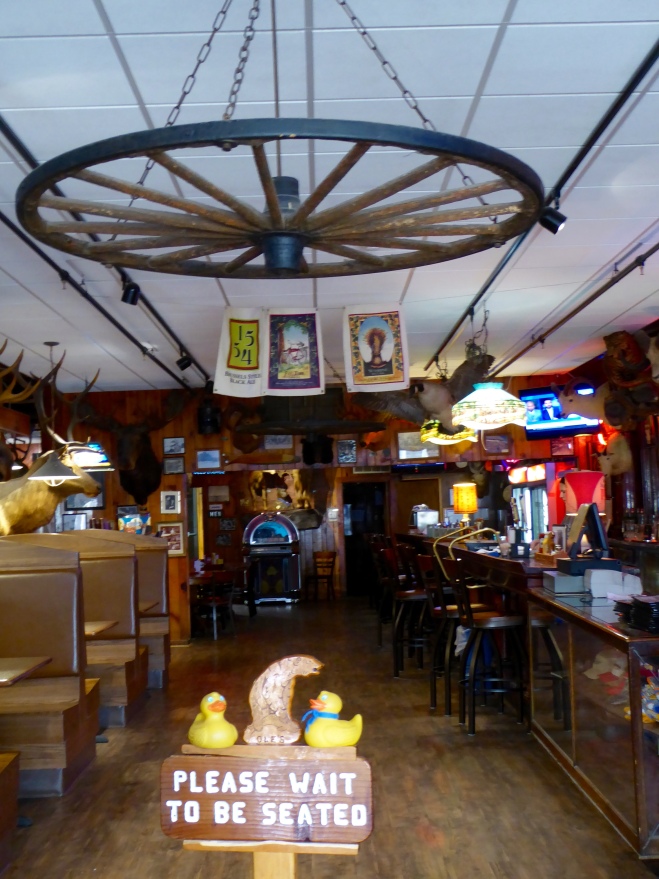 We like the wagon wheel suspended from the ceiling.   And look at our lunch companions.   These guys are looking right at our booth. 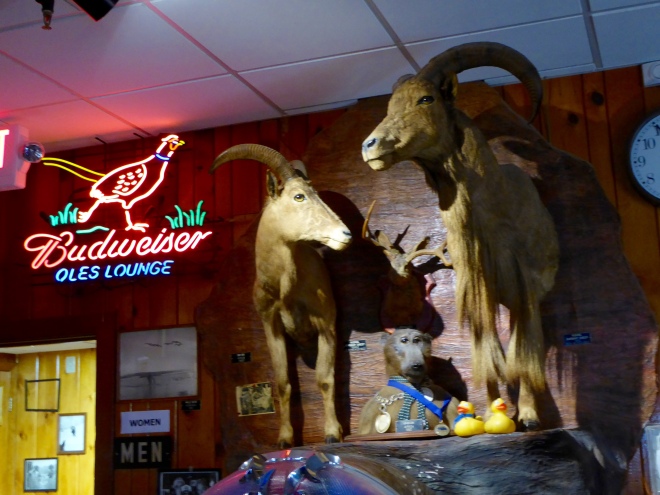 OK Mom. . .What is the story behind this restaurant?   From the front of the building we know the bar opened in 1933.   The menu tells the rest of the story.   Prohibition ended in 1933 and Rosser O. Herstedt or Ole as he was known, opened a bar on Paxton’s main street.   The bar soon became the main gathering place and hunting the main topic of conversation.   In 1938 Ole had a trophy deer mounted and displayed in the bar.   That was the beginning…  Over a period of 35 years Ole hunted on all continents and brought trophies from every trip to display in the bar. 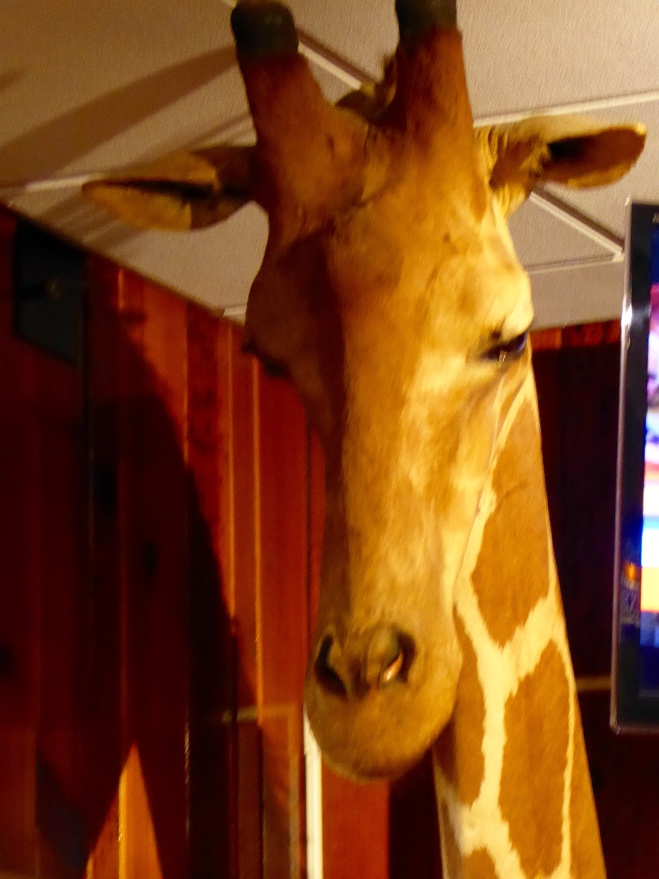 Not many of these in restaurants

Soon Ole’s bar was home to one of the most extensive private collections of mounted big game animals in the world. 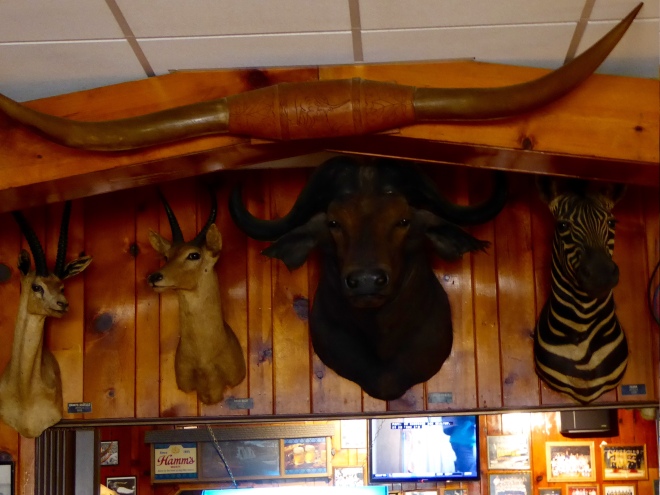 Ole made his last hunting trip in 1973, but the legend lives on.   In 1988 the bar, or lounge, was purchased by another native of Paxton, Tim Holzfaster.   The lounge and the adjoining restaurant are now combined as Ole’s Big Game Steakhouse.   The food is very good and diners view over 200 mounted trophies.   This moose watched us eat. 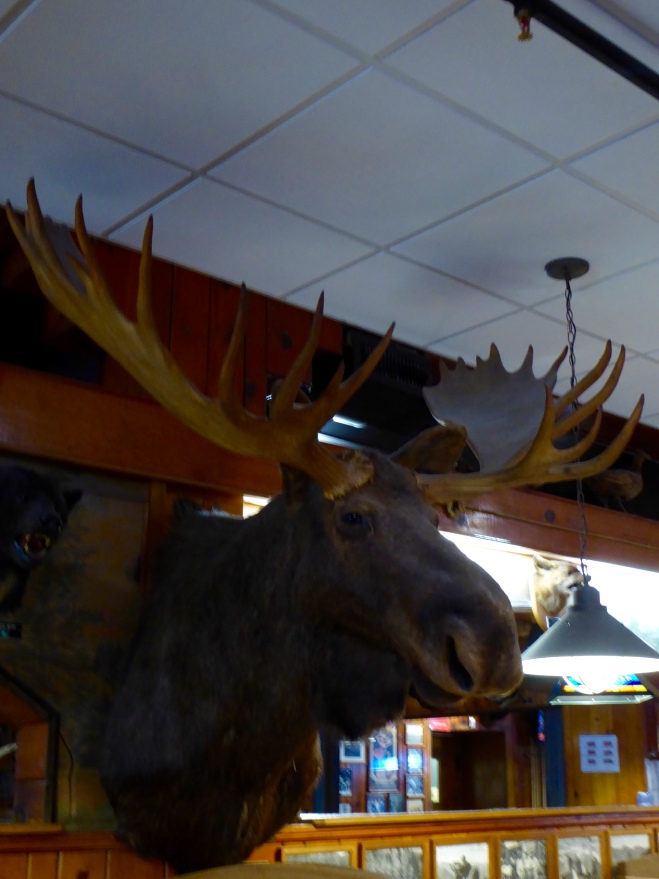 There is more to Ole’s than great food and hunting trophies.  You can shoot pool while admiring photos of local school teams.   Ole’s is in a small Nebraska town and the entire town is important.   The school teams are recognized and supported here.   There are also video games for your enjoyment.   You will enjoy a unique dining experience here.   Visit http://www.olesbiggame.com  for more information.   Our next stop was Gothenburg, Nebraska.   This is an original Pony Express Station. 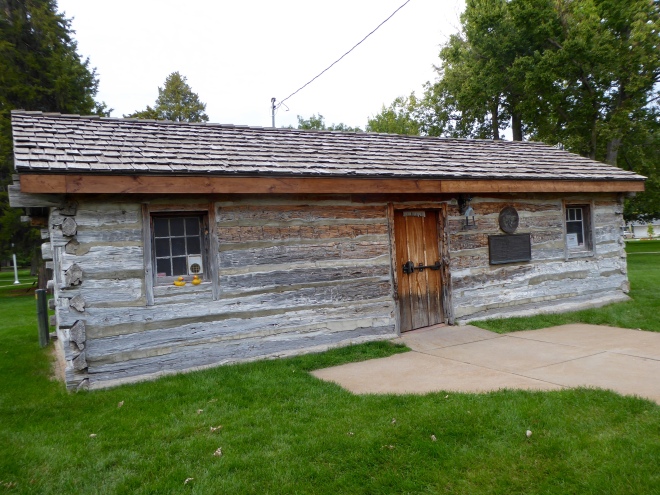 We are looking in the window.  This is the original building, but it has been moved a short distance to this location.   Gothenburg also has a Sod House Museum. 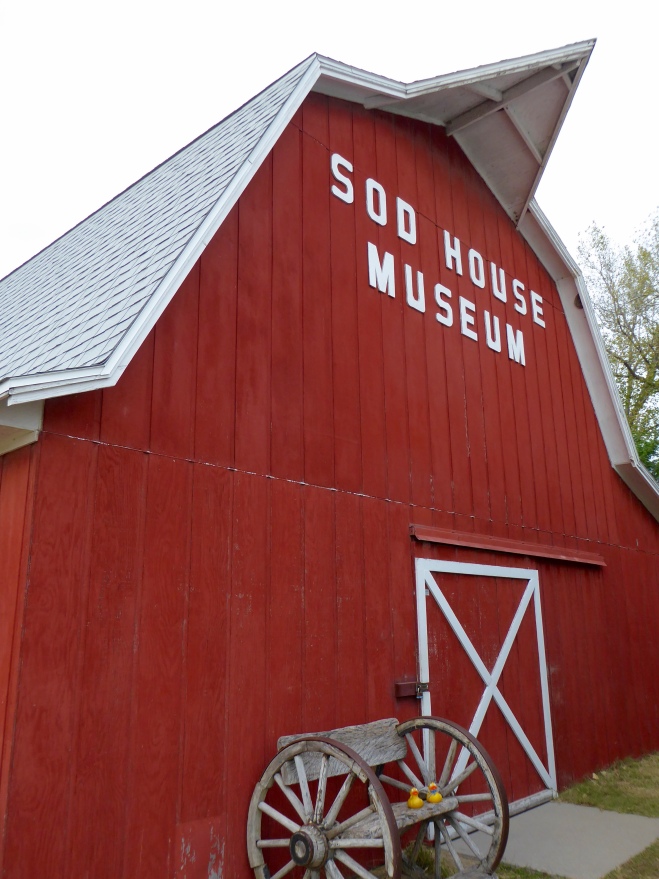 This giant plow is dedicated to sod house settlers. 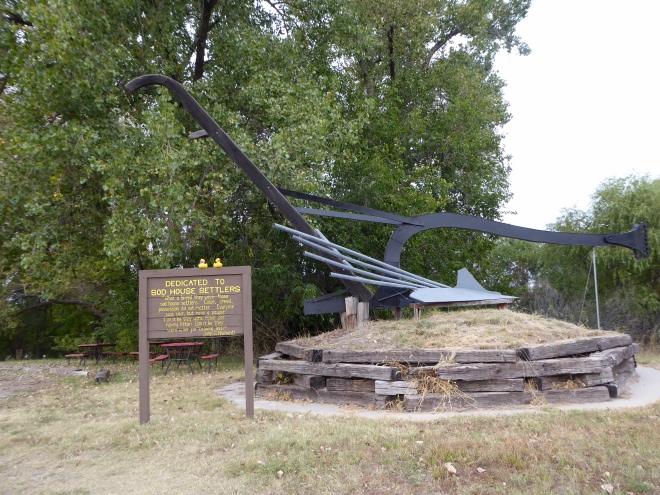 We really liked these buffalo sculptures in the field. 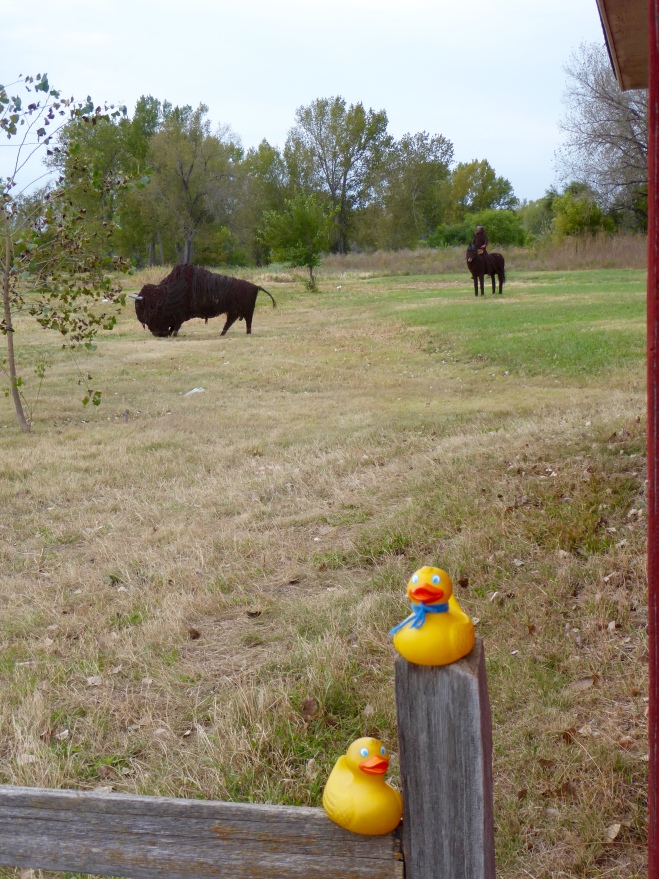 Where the buffalo roamed

Nebraska was part of most of the trails to the west.   The Oregon Trail passed through Nebraska, as did Lewis and Clarke.   The gold rush to California used Nebraska as part of the route, as did the Mormon Trail to Salt Lake City, Utah.   And, of course, the Pony Express delivered mail to Nebraska.   Nebraska has many interesting museums and monuments to honor the courageous pioneers.