Zeb and Eider Duck and the human are now in the opal capital of the world.

Coober Pedy is the Opal Capital of the World

We are in Coober Pedy, South Australia.   Coober Pedy is in the southern outback desert.   In the heat of summer, temperatures of 50 degrees Celsius have been recorded.   For those of us using Fahrenheit temperatures, that is about 124 degrees.   The first opal was discovered by Willie Hutchison in 1915, and the town was born.

95% of the world’s opals come from Australia and Coober Pedy produces more than any other area of Australia.

When World War I ended, returning soldiers came to find opals.   There was very little wood to build homes and the soldiers had lived in underground fox holes during the war.   With no wood and extreme heat, living underground was the best solution.   The home were called dugouts, as most were dug out of the side of a hill. 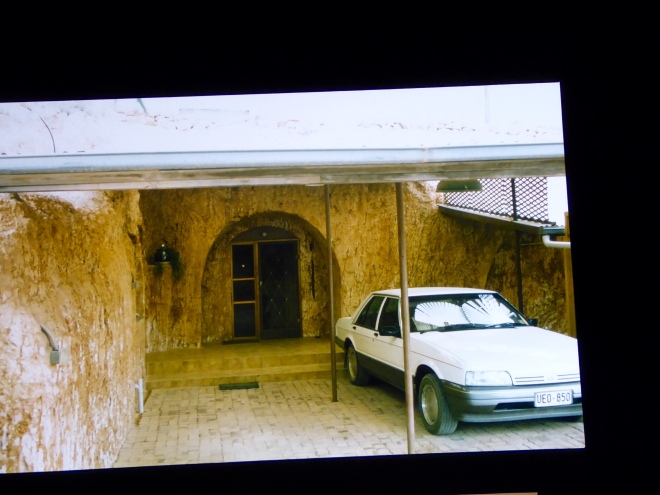 Dugout is dug out of side of mountain or hill

The name of the town came from the aboriginal phrase, Kupa Piti,which means “white fellows in a hole.”   Today over half of Coober Pedy’s population lives in dugouts, underground.   The underground temperature remains a comfortable 24 degrees Celsius (about 73 degrees F) all year.   We stayed at the Desert Cave

Desert Cave Hotel. We stayed in underground part in the back

Underground hall to our room

Climb up for emergency exit

Our hotel has a bar and game room that is underground.

Underground Bar in our hotel

Our breakfast restaurant, the Crystal Cafe, is also underground, as is the gift shop and the opal store, Opal World.    Our hotel, the Desert Cave, has a tunnel from the reception to the restaurant and shops.   We are going down the stairs and into the tunnel. 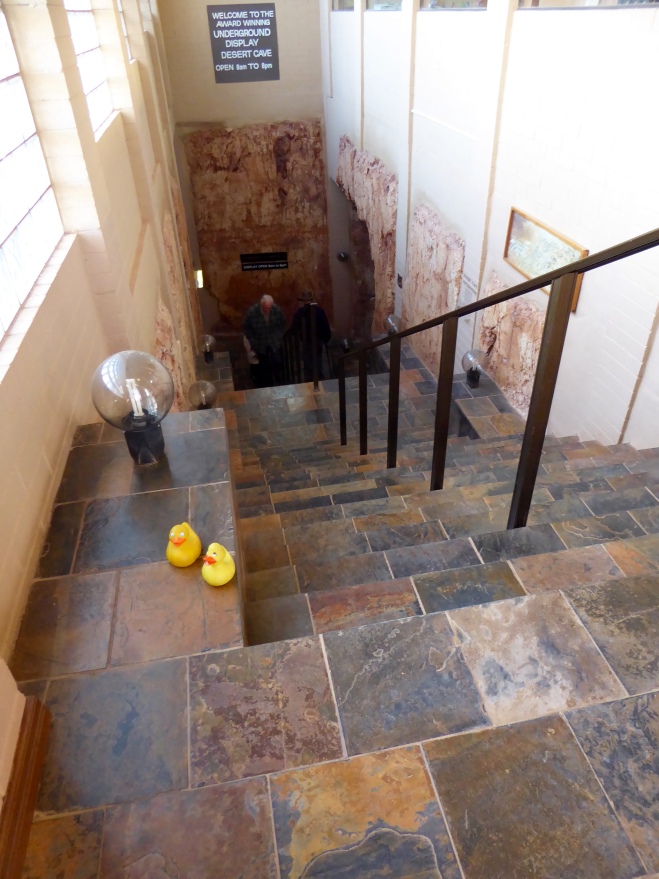 Down the stairs to our hotel tunnel

In the tunnel we discovered an opal mine and museum.   Here is a pretend miner using the mine shaft to enter and exit.

A fake miner using ropes to enter and exit the mine

We are on old mining equipment

We really liked our hotel and we like visiting Coober Pedy.   If you visit here, be sure to arrange transportation to your hotel before you arrive.   There are no taxis in Coober Pedy.   Next time we will show you some of Coober Pedy.   We like it here.