This is the Washington Monument.

We are in Washington D.C.   This is exciting.   We see these monuments on television at home and now we, Zeb the Duck and Soapy Smith Duck are here.  The Lincoln Memorial is big.   We are from Colorado, so we want to remind you that there is a town in Colorado named Marble.   There is marble there and some of the Colorado marble is used in this Lincoln Memorial.   Colorado marble is also used in the Tomb of the Unknown Soldier in Arlington National Cemetery.   Sometimes we Colorado Traveling Ducks, do brag.

This is a lot of steps, but our moms say we are climbing all of them.   We did it.   We ducks are sitting near Lincoln, looking up to him for wisdom. 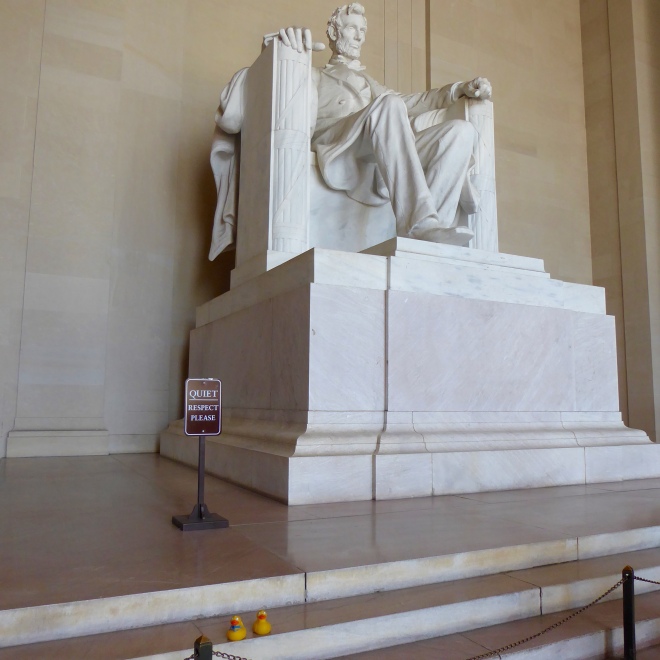 From the top of the Lincoln Memorial, we look over the reflecting pools to the Washington Monument. 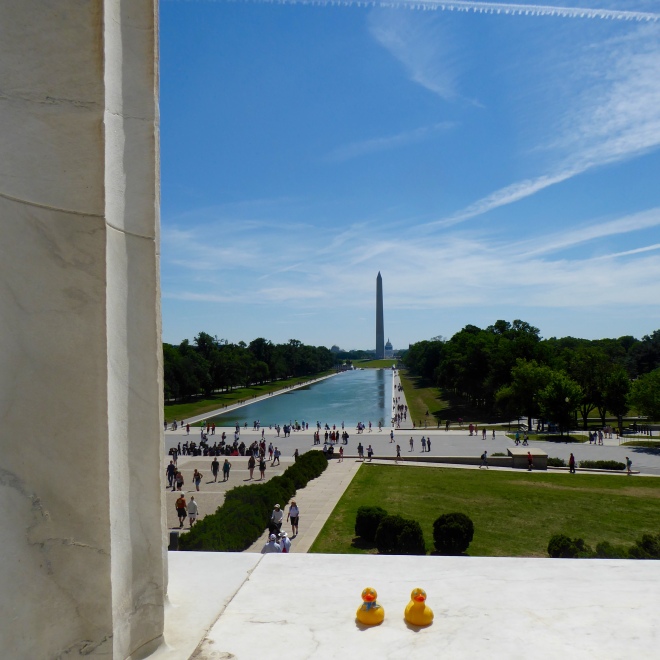 Toward Washington Monument over reflecting pool.

From the top of the back of the Lincoln Memorial, we look down the bridge to Arlington Cemetery.   The large building is the former Lee Mansion, former home of Robert E. Lee.

Lee was a general for the south, or Confederacy, during the U.S. Civil War.   After the north won the Civil War and slavery was ended, the property of Robert E.Lee was turned into the largest Federal cemetery in the United States.   Washington D.C. has many war memorials and monuments.   This is in remembrance those that fought in the Korean War. 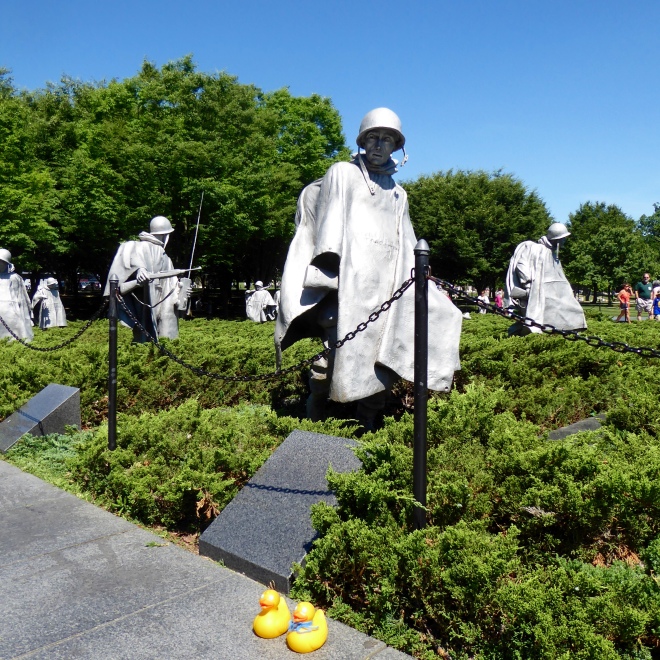 The wall behind the soldiers is etched, in remembrance of the Korean War. 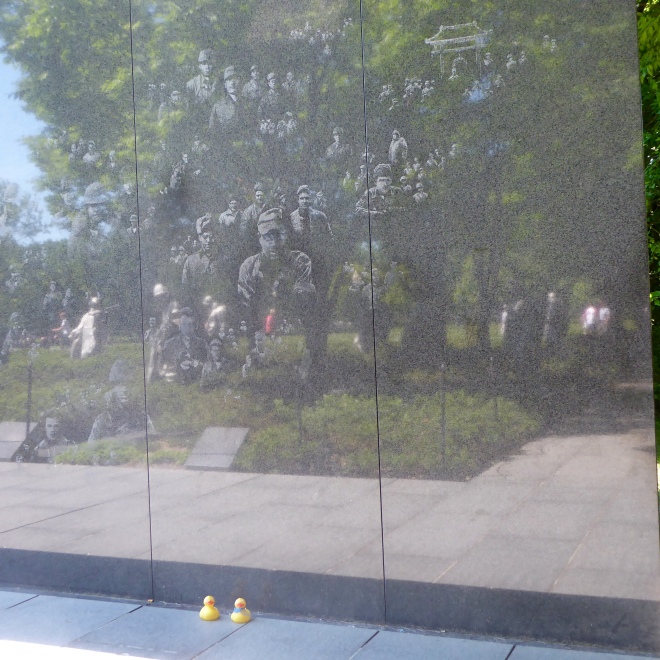 This pool is also at the site of the Korean War Memorial. 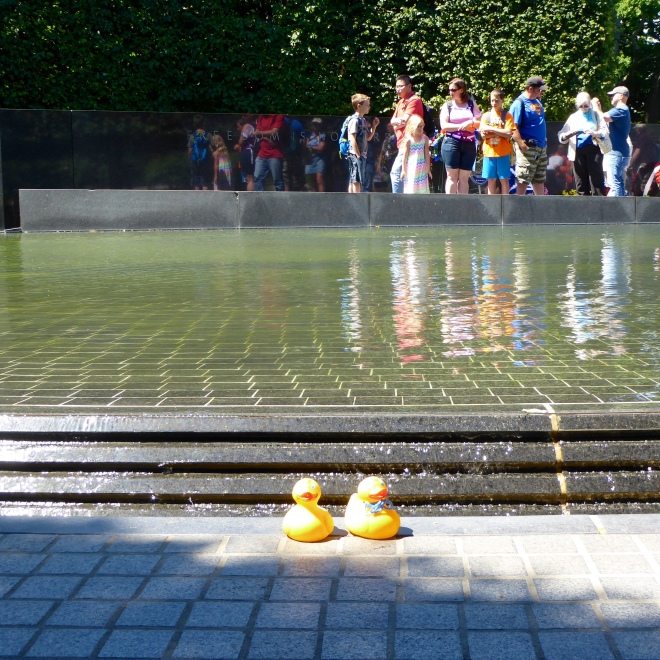 One of the newer memorials was dedicated by President George W. Bush on May 29, 2004, to those 16 million members of the Armed Forces of the United States of America that served during World War II.  This memorial is huge.   We entered the memorial through this arch.

One of two arch entrances to World War II Memorial

The two entrances are Atlantic and Pacific.   We admired the fountains in the center.

Pillars represent each of America’s 48 states, from 1945, and each US territory.

This is Alaska’s pillar, since Eider, our Alaska cousin was not with us today.  There are 24 artistic pieces in bas relief, representing scenes of war experiences. 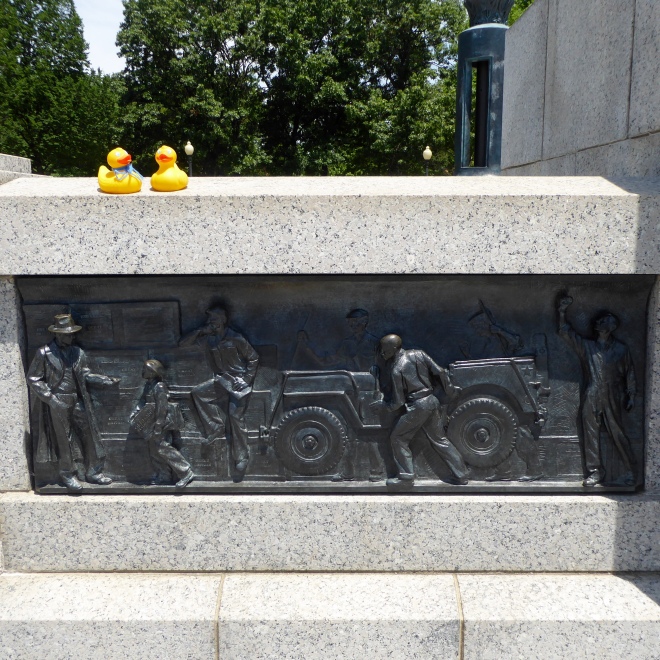 We liked the road vehicles.   But, we also liked the airplanes.

The first piece shows new soldiers ready for physical exams.   The last shows a handshake between American and Russian armies.   The Price of Freedom is huge.

The Price of Freedom

There are 4,048 gold stars on this wall.   Each gold star represents 100 of our American service personnel that died or remained missing in World War II.   The 405,399 lost is second only to the more than 620,000 Americans lost during our Civil War.   I have to tell you, that we did not take this last photo, but we really liked it.   This is a panorama at night.

We are so impressed with all the monuments here.   We will show you more next time.