Zeb and Soapy Smith Duck saw so many bones today.   So many big bones!   We drove from Colorado to Jensen, Utah.

After the Visitor’s Center, armed with new maps and information, we drove to Utah’s Dinosaur National Monument.   This National Monument was established in 1915.   We will see real dinosaur bones today. 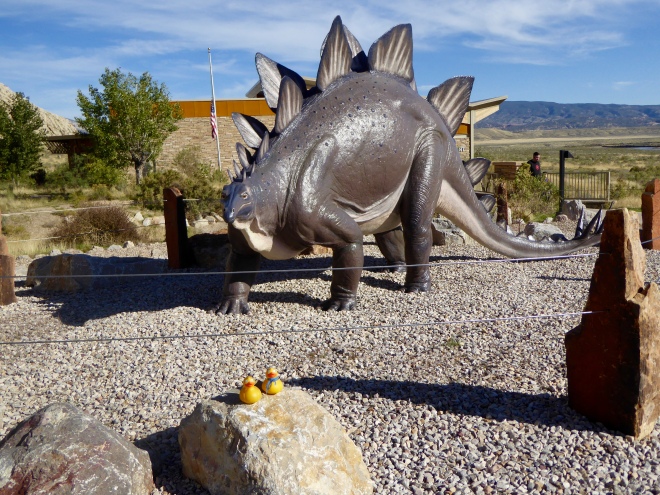 Zeb and Soapy watched by dinosaur

He is looking at us in a fun way, mom.   Inside we learned that people have been living here along the Green and Yampa Rivers for over 10,000 years.   The Fremont people lived here 1,000 years ago and left petroglyphs on rocks.   Mom said we will see some before we leave Utah’s Dinosaur Monument.   First we visited the Quarry Exhibit Hall.

One side of this exhibit hall is an actual wall of the quarry.   We can sit on these real dinosaur bones still in the quarry wall.

Bones still in the earth

The signs tell us that these dinosaur bones are 149 million years old.    That is really old!    We are on the case of one of the best preserved skulls ever discovered.   The large allosaurus skull, discovered here in 1924, has thin, delicate bones and amazingly is not crushed.

This adult right thigh bone is an original Camarasaurus Femur, also from the Morrison Formation of the Jurassic Period.   The Camarasaurus was the most common dinosaur in the quarry and this femur is also 149 million years old.   This sign lists the dinosaur remains found in this quarry.

Bones of these dinosaurs are here

Quite a variety of dinosaurs lived and roamed here millions of years ago.   The quarry still has many bones in the dirt.

Still in the quarry wall

We, The Colorado Traveling Ducks, are amazed by the variety of these bones.

Zeb and Soapy wanted to know why so many dinosaur bones are in this area.   Information from The US National Park Service tells us this story.   “Dinosaur National Monument includes one of the Earth’s richest known dinosaur fossil beds.   These remains are from the Jurassic period 150 million years ago.   During a drought, many dinosaurs died near a river’s edge.   When rains returned, floodwaters carried the jumbled bones of over 500 dinosaurs, representing ten species, here.   Ancient river sediments, now called Morrison sandstone, entombed the dinosaur bones.   Minerals then filled the bones (though some organic material survived) and cast them in stone.   Erosion eventually exposed the fossils.   In 1909 Earl Douglass, of Pittsburgh’s Carnegie Museum, declared this site ‘the best-looking dinosaur prospect I have ever found.'”      We drove through the national monument, stopping to see petroglyphs from the Fremont People.   Let’s go to the cave and look.

Let’s go to the cave

This carvings in the wall are about 1,000 years old. 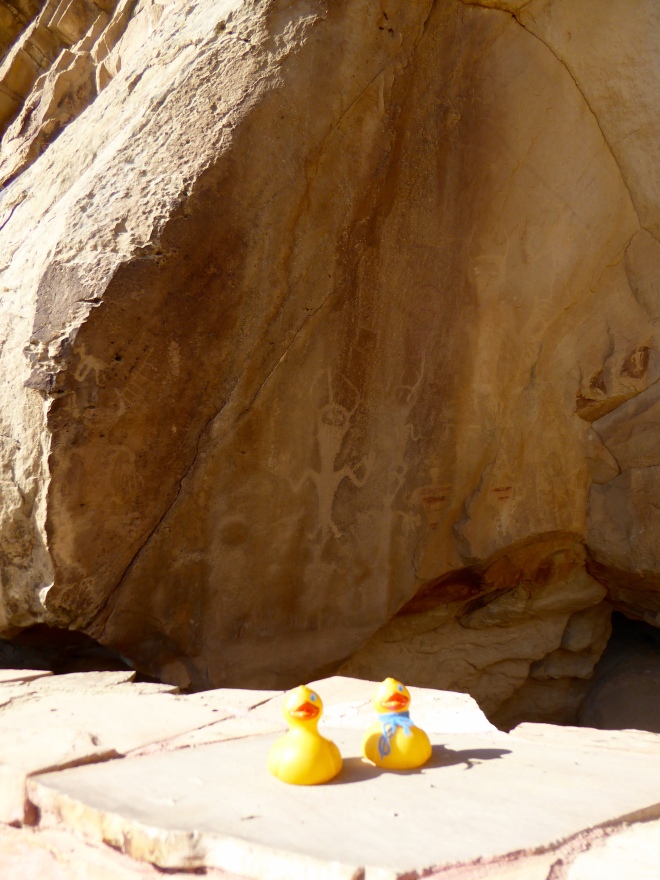 These are not in the cave, but on a rock near the entrance.

There is so much to see and learn here and the hiking trails are great and well marked.   We hope you visit Dinosaur National Monument or any of the more than 400 parks in the US National Park System.   2016 is the 100th anniversary of the US National Park Service.   We love visiting these parks and think you would also enjoy them.