Soapy Smith Duck and I, Zeb the Duck, took our moms to Georgetown, Colorado to ride the narrow gauge train.

We live about 40 minutes away and it was a beautiful, sunny Colorado day.   It was Buffalo Bill Days at the railroad.    This is a great chalk picture of Annie Oakley.

And, of course, here is a silhouette of Buffalo Bill. 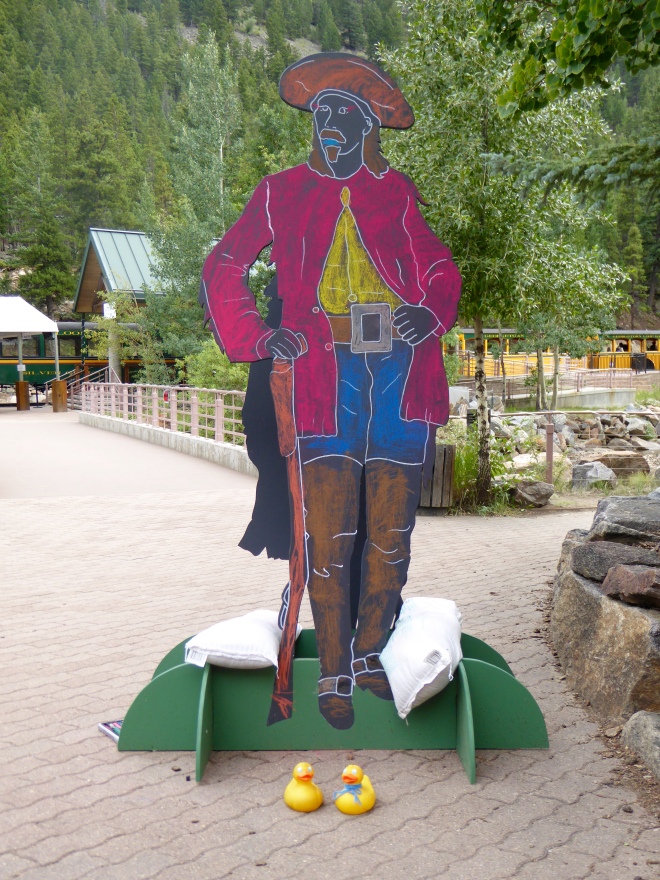 Jeff was there helping people pan for gold.   We are watching and helping Soapy’s mom with gold panning. 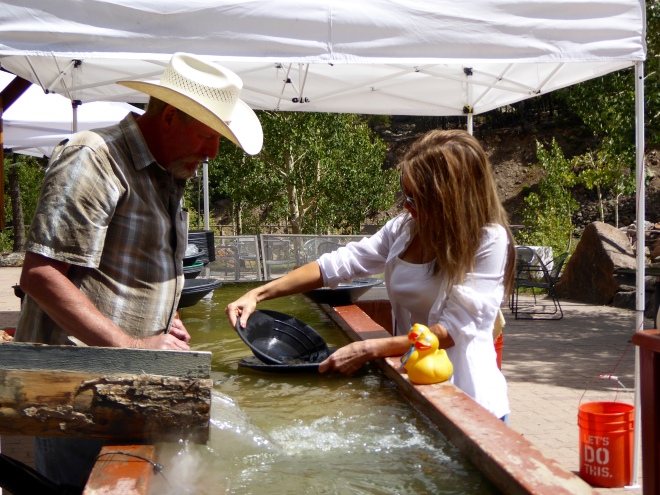 She found some gold.

Then she panned for gems. 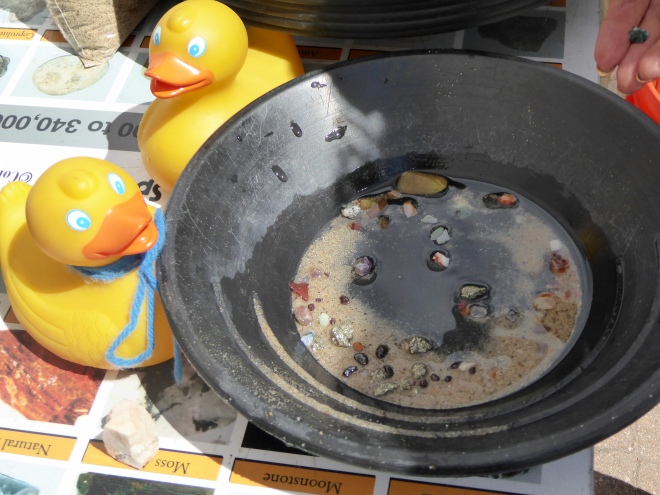 This is fun.   The Georgetown Loop Train leaves from Devil’s Gate Station in Georgetown. 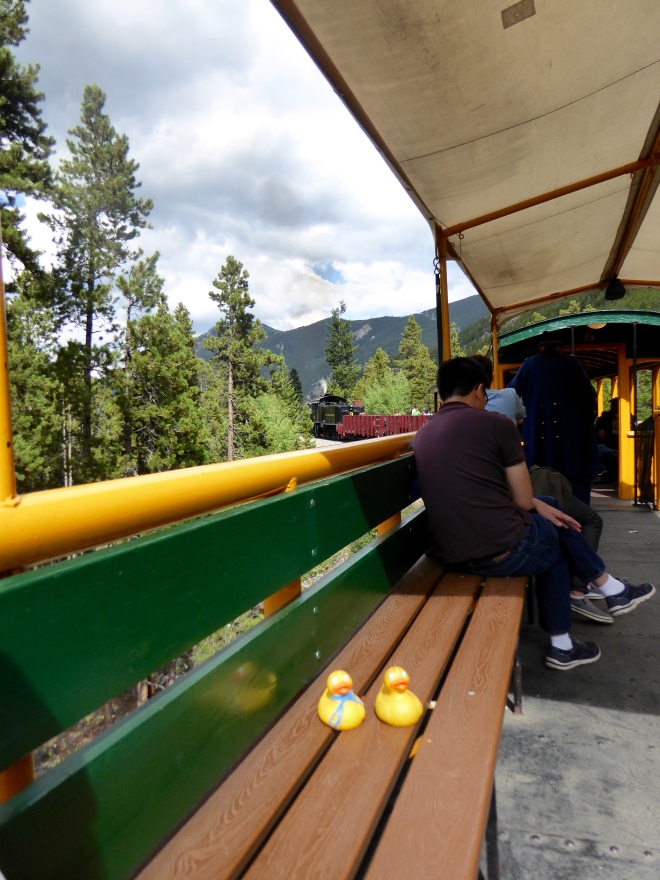 When you drive in the mountains, the roads have switch backs, so you do not drive straight up. The train tracks do similar looping and turning, to reduce the uphill grade to about 4%.   We will cross Clear Creek four times to arrive at Silver Plume.

This is one of the bridges we will cross.

We will be up there soon

In the late 1800’s this was a great engineering accomplishment.   Soapy’s mom with a wild west character. 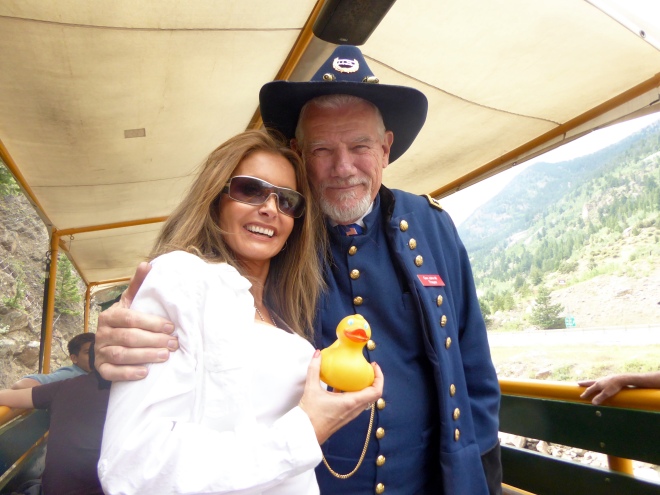 We arrived at Silver Plume station.

Some passengers got off and others got on here.   We got off for a few minutes to purchase snacks and then back on the train.   We love being in our Colorado Rocky Mountains.

With Annie Oakley and Buffalo Bill

Here is another view of the front of our train. 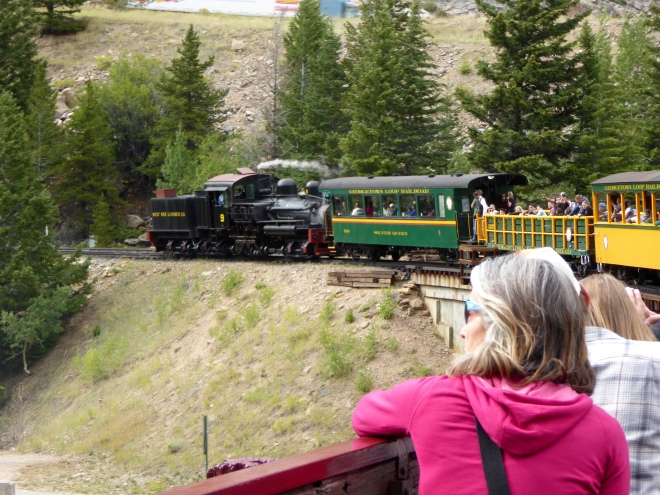 Our train is heading back

We are approaching Devil’s Gate Station, our starting and ending point.   We liked these musicians, and they like the Colorado Traveling Ducks.

When you are in Colorado, we hope you ride this train or one of our other narrow gauge trains. Have fun and do some tourist things in your home town also.   We had fun today.

Ducks, let’s get in the car.   Those are some of our favorite words.  Driving east on I-70 from Denver, we passed Limon and Burlington and entered Kansas.

We are entering Kansas

Naturally the first stop was the Kansas Welcome Center for travel information.

Let’s find out what to see

The wind was strong here.   Our next stop was Goodland, Kansas to see the Van Gogh.   A huge, 80 foot tall, reproduction of Vincent Van Gogh’s “Three Sunflowers in a Vase”, on an easel stands tall in Goodland.

Replica of Van Gogh’s Three Sunflowers in a Vase

The reproduction was painted by a Canadian artist, Cameron Cross.   If you are on I-70 in western Kansas, you should stop in Goodland to see this.   Continuing east we took Exit 70 to Oakley, Kansas.   As you may guess, this was the home of Annie Oakley, originally Annie Moses.    We stopped at the Buffalo Bill Cultural Center. 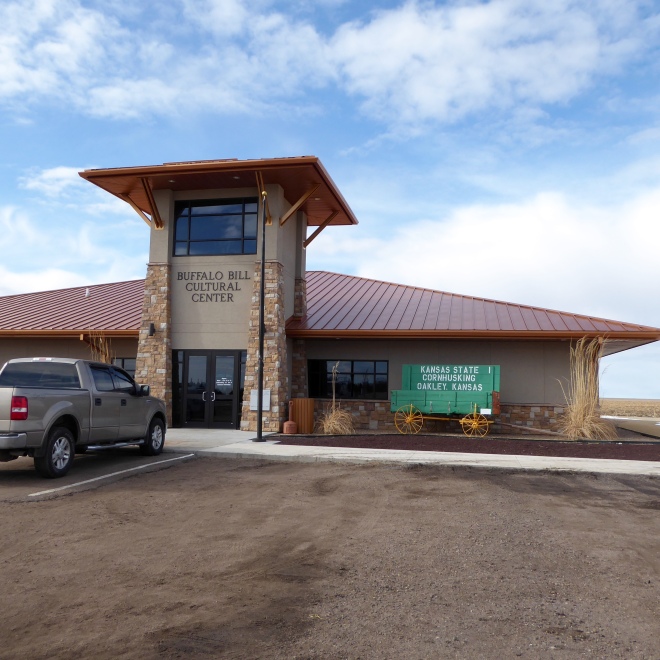 The big attraction here is the statue on a hill. 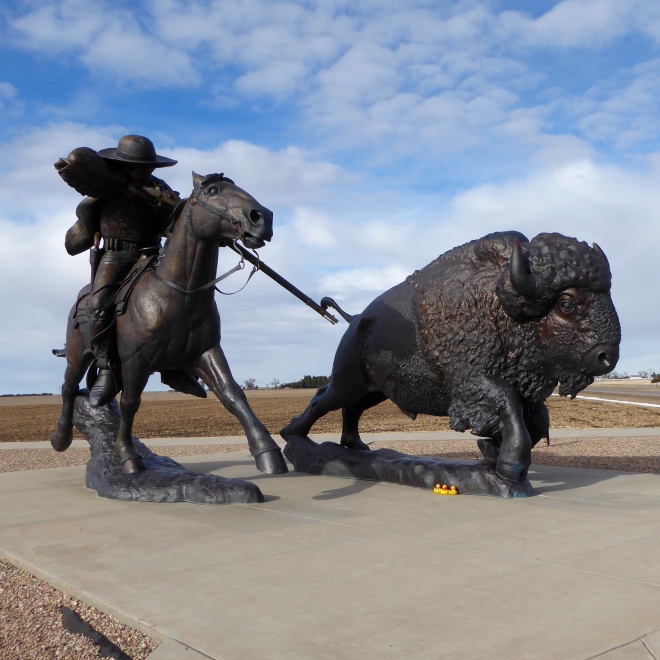 Buffalo Bill and a Buffalo

Buffalo Bill and a buffalo.   Inside, the Colorado Traveling Ducks, sat on the head of a buffalo.

We believe this was our first buffalo sitting.   Buffalos are big.   So far, Kansas was all farmland.

We headed south on Hwy 83 toward Oklahoma, and soon we saw pumping oil wells. 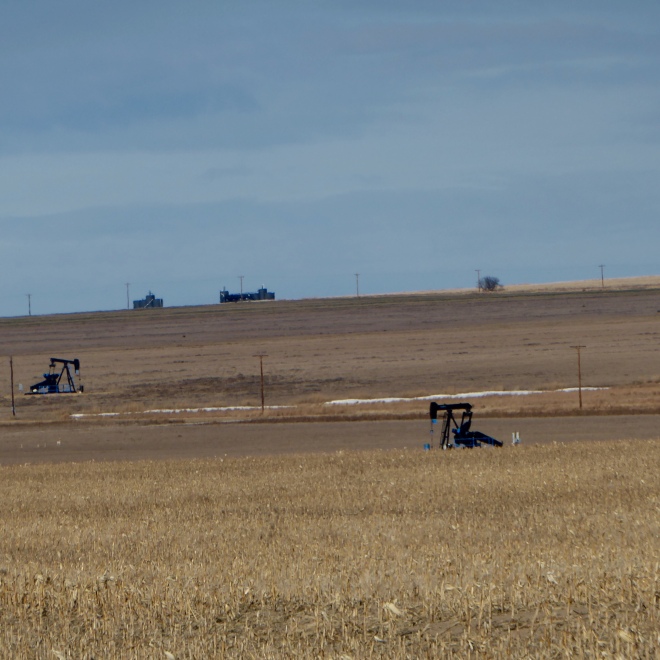 Turning off the highway onto dirt roads, we were heading for Monument Rocks.   We liked this view of the road.   There are not many trees, but these two near a river bed formed an arch over the road.

Suddenly we spotted the Monument Rocks, also known as the Chalk Pyramids of Kansas.

The 70 foot tall sedimentary formations of the Niobrara Chalk were created 80 million years ago when Kansas was a vast inland sea.   We parked and walked around some of the chalk pyramids.   They are really big and we are really small.   Mom had to be careful where we sat.   The wind blew us away a few times. 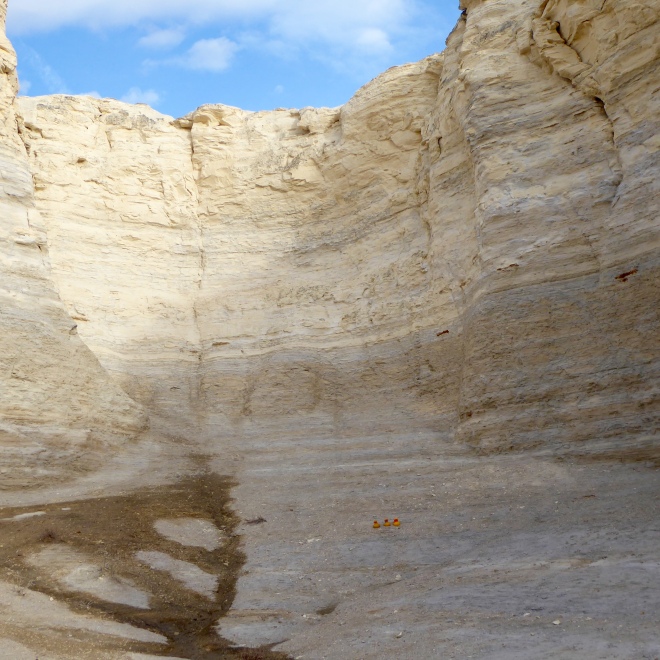 We are in this photo

We love arches.   We three ducks are on the ground on the right side of the arch.

Colorado Traveling Ducks on right side of arch

Monuments Rocks or Chalk Pyramids of Kansas    Mom is experimenting with the panorama feature on the camera.

We think these formations, about 27 miles south of I-70 are worth the time to leave the interstate and see some of what Kansas has to offer.   When you are in Kansas, be prepared for lots of wind.

So much history occurred at Denver’s Buckhorn Exchange.  We go there for excellent exotic food and old time atmosphere.  This famous steakhouse opened for business in 1893.  And it is still serving fabulous food to Denverites, visiting dignitaries and tourists.  I, Zeb the Duck, my Alaska cousin, my Alaska Uncle and my mom went here for dinner.  We all liked it. 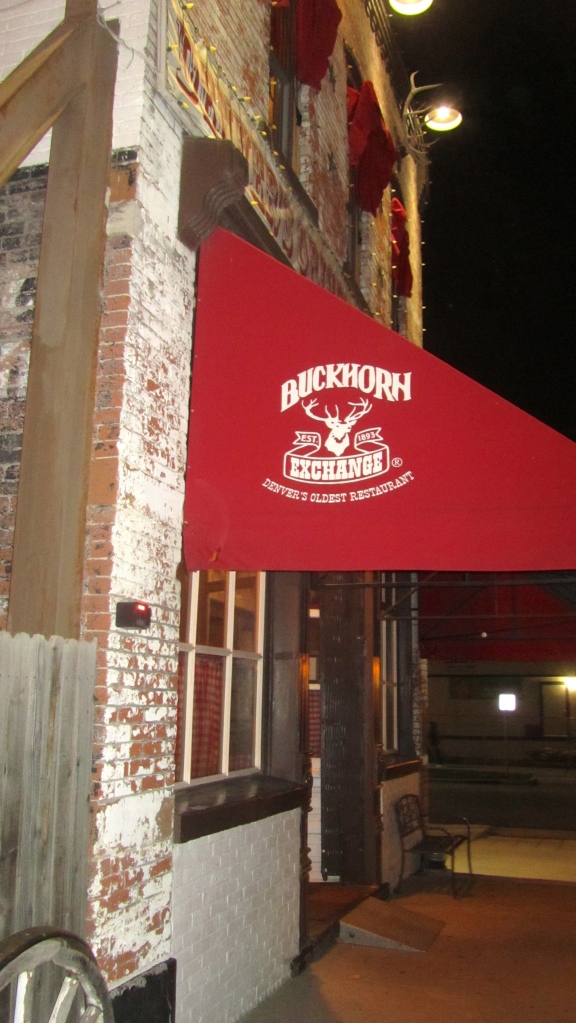 The Buckhorn Exchange in Denver

The Buckhorn Exchange was opened and operated by Henry H. Zietz.  Zietz, one of the most colorful figures of the Early West met Buffalo Bill Cody and became a member of the scouts.

President Theodore Roosevelt ate here and hired Shorty Scout to be his hunting guide.  Other presidents and dignitaries also ate here.  In June 1938 about 30 Indians in full battle regalia rode war ponies down Osage Street to the Buckhorn.   Shorty Scout appeared and Sitting Bull’s nephew, Chief Red Cloud, presented Shorty Scout with the sword, taken by Chief Sitting Bull, from the body of General George Custer at the Battle of Little Bighorn in 1876.  The Zietz family owns the rare sword to this day.

The walls have wonderful displays

You will also enjoy viewing their fabulous gun collection.

Our humans each ordered the combination plate.  They had a buffalo tenderloin and elk with a mixed berry chardonnay sauce.  They each had a baked potato and mixed vegetables.

Elk at top of plate,then baked potato, with buffalo closest to my human. Yum!

The meat was so tender.  Everything was very tasty.

Our table had a candle and we liked the candle container.

This, like the entire décor, is very rustic and feels Early West.

The white oak bar, made in Germany in1857 is on the second floor of the restaurant.  Framed behind the bar is Colorado Liquor License No. 1.  This is real history.

We are sure you will enjoy visiting and dining at the Buckhorn Exchange.

Take time to experience the history here.  For more information visit www.buckhornexchange.com   The restaurant and lounge is located at 1000 Osage Street in Denver, Colorado.