Yes, you read that correctly.   Mom said we are flying to North Pole, Alaska.   Not THE North Pole, but the suburb of Fairbanks, named North Pole.  I, Zeb the Duck, am going to Alaska.   Mom, isn’t this winter and isn’t it cold in the winter?  Well, we will experience North Pole, Alaska in February.   Driving to Denver International Airport that morning, Soapy Smith Duck’s mom drove us through snow, ice, and subfreezing temperatures.   Thanks for the safe ride!   After boarding our Alaska Airlines flight, we taxied to the de-icing area. 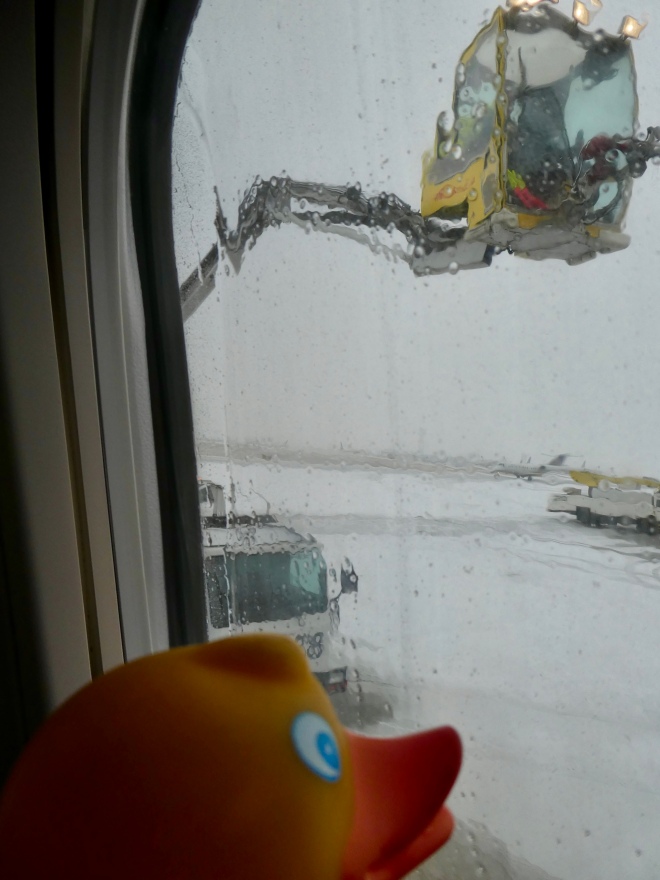 De-icing our plane in Denver

This man high above our plane, sprayed us.   Driving all around the plane, spraying, he then got higher and further away, and sprayed some more.

More de-icing to keep us safe

Airborne now, our first stop was Seattle, a fast change of airplanes and then on to Fairbanks, Alaska.   Approaching Fairbanks, there was a lot of white snow on the ground.   From our window, we saw the frozen rivers below us.

The Chena River flows into the Tanana River, that flows through Fairbanks.   The Tanana then flows into the Yukon River.   Mom wasn’t sure which river this was.  While waiting for our baggage, we enjoyed seeing this small plane.

Many areas of Alaska are accessible only by air.   As you can guess, many Alaskan are pilots, with many owning their own airplanes.   But today, our reason for flying to Fairbanks is rather sad.   You may remember that Eider Duck, our Alaska cousin, lives with his dad, my mom’s brother.   In October 2017 mom and I flew to Anchorage, Alaska.   Eider’s dad was in the hospital and he passed away in November, 2017.   Mom and I brought Eider Duck to Colorado and he now lives with us.   Mom is executor of his estate, so Eider, Zeb and mom are here for a few days to start settling things.   Between the airport and Eider’s house, we drove down this road.

The snow this year is wetter than usual, so snow did not fall through the trees and pile up on the ground.   The wetter snow stayed on the trees and power lines.   The snow covered trees are beautiful, but the snow is not melting and many trees are breaking.   It is not certain if the trees that do not break, will ever be straight again.   Eider is getting excited now.   He knows we are just a few blocks from his house. 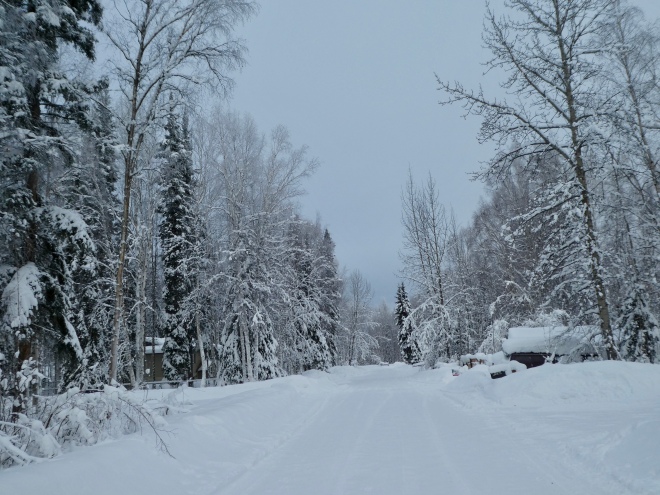 Here we have many trees that are not bent, but there is still a lot of snow.   Eider and I, Zeb the Duck, are sitting on pile of snow in front of Eider’s house. 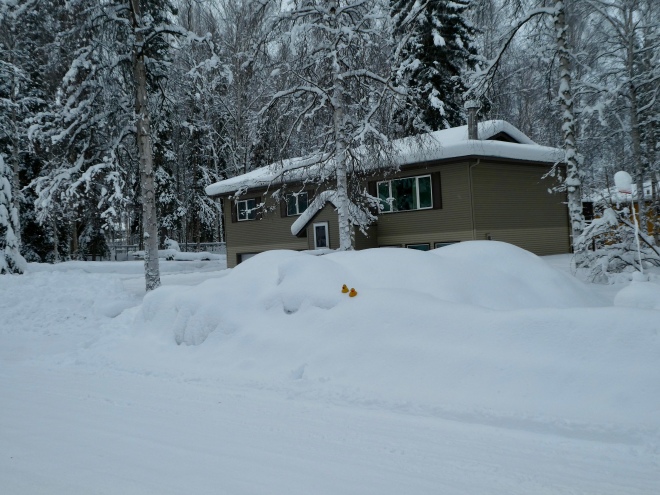 On snow pile in front of Eider’s house.

There is about 2 feet of snow on the ground.   It was difficult for mom to try to walk.   She gave up and just stayed where the snow had been plowed and shoveled.   All is so white here.   The white snow, the skies were cloudy and more snow clouds were moving over the area.   Almost every day of our stay, we had some new snow, overcast skies and power outages.   The power company tries to keep the lines clear and keep power on, but it is a huge job.   Usually the power would be out for less than 2 hours, so things were OK.   We did miss our bright blue Colorado skies, but the peaceful, quiet and calmness of the area was wonderful.   A low population means fewer vehicles so the snow stays pristine white and beautiful.   Looking through the window of Eider’s house, was soothing.

So peaceful and calming

Mom took this photo about 20 minutes before sunrise.   In that special early morning light, photos often have that special blue tint.  Very nice in the photos.   We’ll tell you more about North Pole, Alaska next time.