Lewis and Clark were the first explorers to mention Giant Springs.

Lewis and Clark followed the Missouri River through this part of Montana.  Clark first wrote of the springs on June 18, 1805.  He said this was the largest fountain or natural springs he ever saw and that the water was very clear. 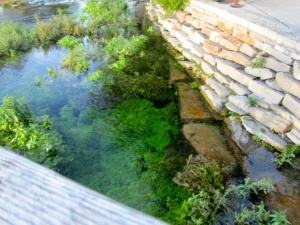 Lewis described the springs as a “beautiful fountain”.

Giant Springs State Park has one of the world’s largest fresh water springs and according to Guinness, the world’s shortest river.  Water from the springs emerges at 54 degrees all year.  From the springs, the water passes through a pool, over rapids, under a bridge and into the Missouri River. 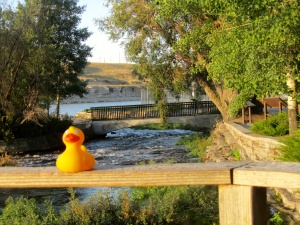 Roe River. One of the world’s shortest rivers

From the springs to the Missouri, this shortest river, the Roe River, is 201 feet long.

Lewis and Clark reported that beaver were plentiful and within years the area had many fur trappers and fur traders.  Because of the warm springs, this was also a popular campsite for American Indians.  The springs provide lots of warm water– over 150 million gallons of water every day, which flows into the Missouri River.   That’s a lot of water!  It does not freeze, but I have become accustomed to swimming in much warmer water.  However, there are several live versions of my kind swimming here.  All the ducks love this place.

The Missouri River cuts through rock as shown in this picture with me. 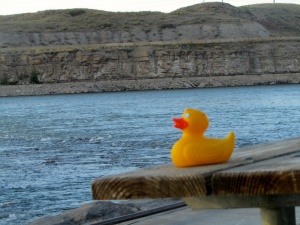 On a hill above the river is a monument to Lewis and Clark. 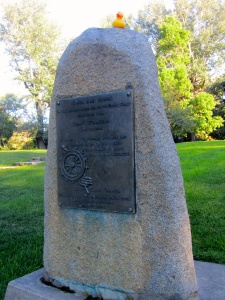 From this monument, the view

of the springs and Missouri River are breathtaking.

The city of Great Falls gave this park to the state and in 1970 Giant Springs State Park was formed.

It is a beautiful place.  I recommend that you come here.  Come to look, come to relax, come to hike or bike or fish, come for a picnic, but do come here.  I know you will love it as much as I do.  For more information visit www.stateparks.mt.gov