Sadly we are leaving Skagway.   But one more stop before we really leave.   Less than 2 miles from downtown Skagway is Gold Rush Cemetery.

This is the final resting place of Soapy Smith, the human. 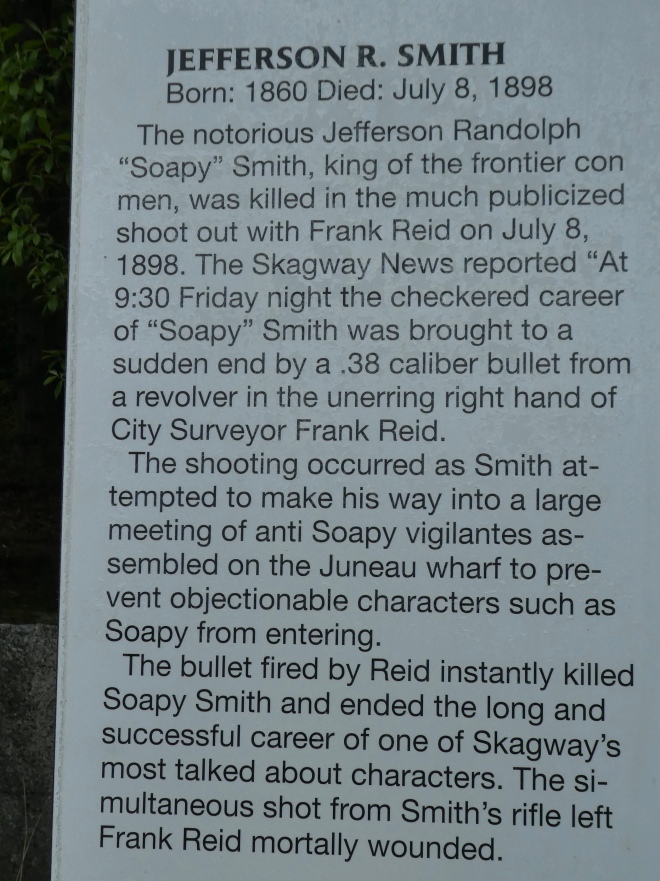 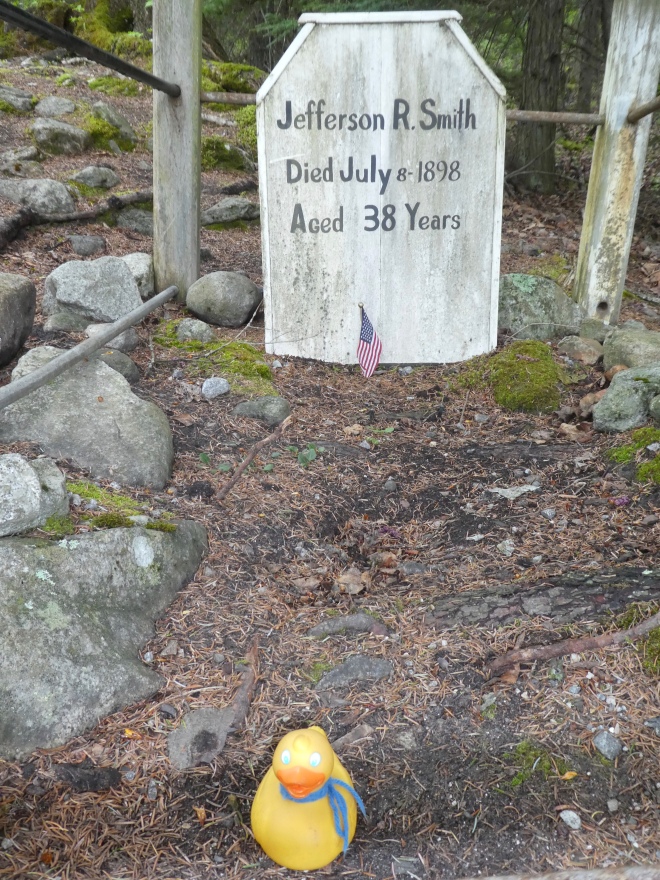 The sign continued saying Reid died from the gunshot wound.  Credited with fatally shooting Soapy Smith, Reid is still considered a hero of Skagway.   Ried, the surveyor, was responsible for laying out the Skagway townsite in early 1898 and he named many of the streets in Skagway today.    Frank Reid, the town hero, has the tallest and biggest tombstone in the cemetery.

Plenty of room here for all our Colorado Traveling Ducks.   Of course the wild days of the gold rush provides many stories. 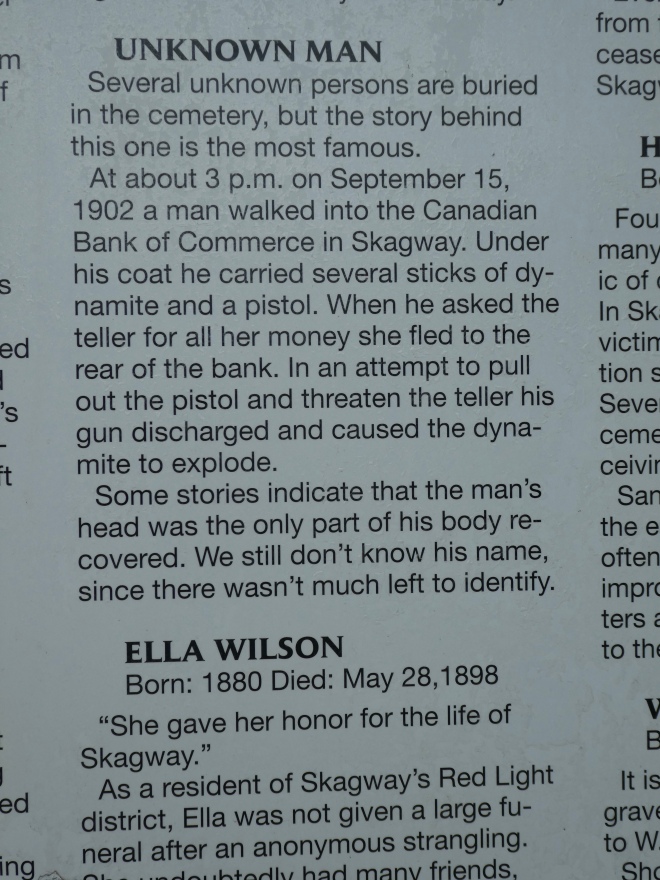 There are a few unknown men, but this story is the most interesting. 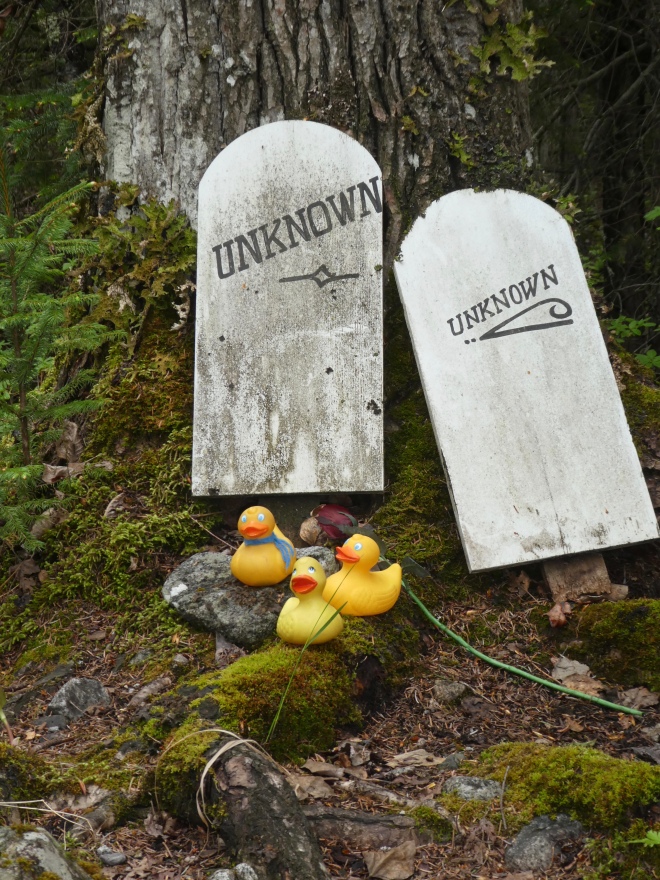 A couple tombstones for unknowns.   We believe one is our not successful bank robber.    The last tombstone that caught our attention is that of Martin Itjen and his wife, Lucy.   ** 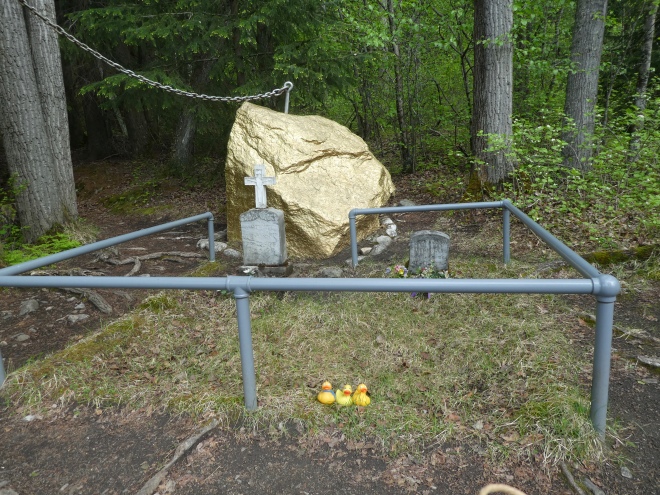 This may be the world’s largest golden nugget.   Really a gold painted boulder, chained to a tree.   Martin created the ultimate tourist attractions.   **

These signs in Skagway’s Gold Rush Cemetery say it best.   Further research told of Martin taking his street cars to Hollywood to promote tourism to Skagway.   Martin was born in Germany, immigrated to Florida, then to Skagway to find his fortune.   That didn’t work out so well, so he became an undertaker, and then turned tour promoter.   Such a varied life he led.   Martin and Lucy Itjen were the last people buried in Skagway’s Gold Rush Cemetery.   A nice path leads from the graveyard, up the hillside, to Lower Reid Falls. 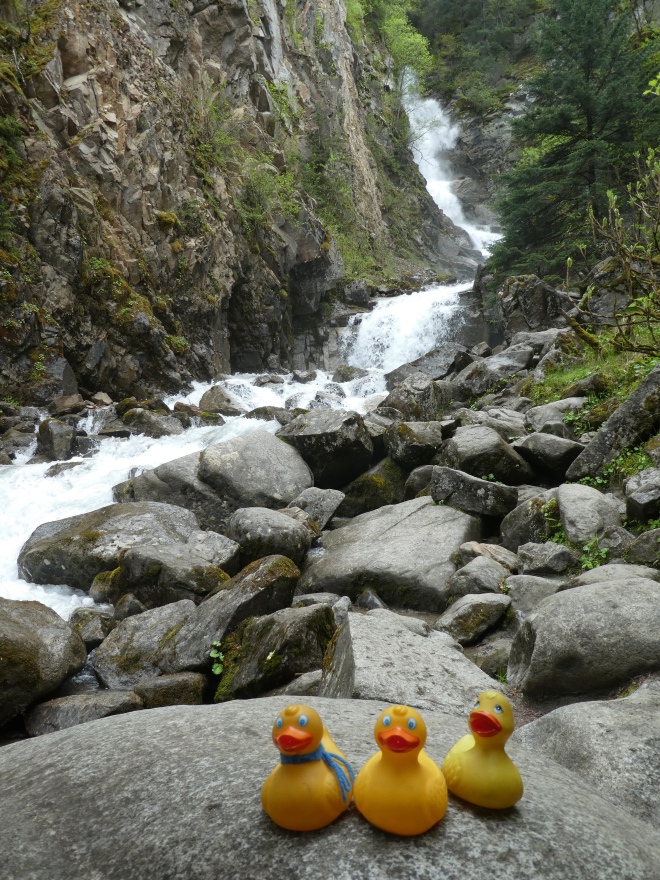 We all love the sounds of water.   And, yes, these falls were named for the town hero, Frank H. Reid.   Along the sides of the rock, we like these crevices. 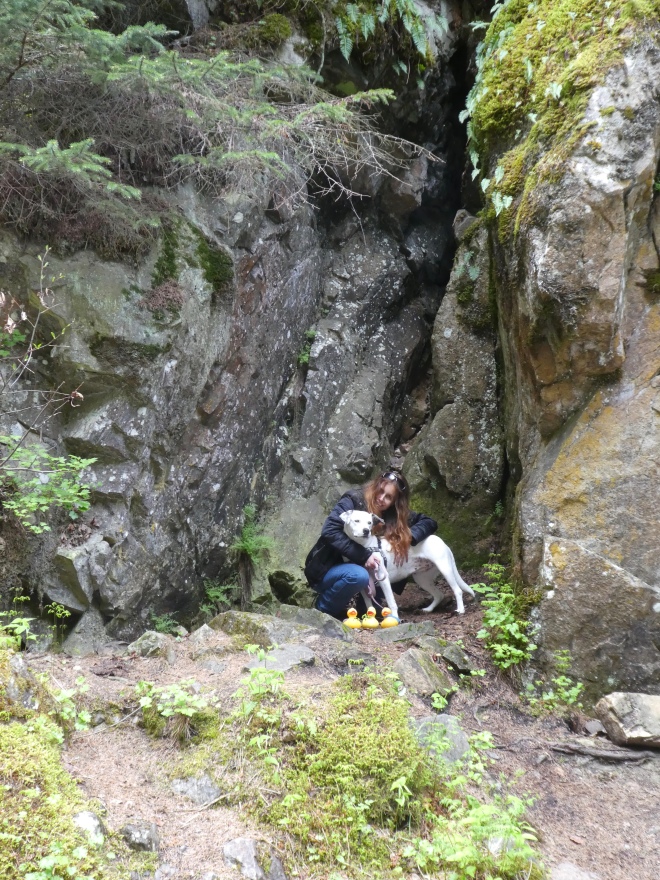 The vegetation is rain forest type; the temperate climate from the water makes this an interesting place to visit.   Before we leave, one more photo.

Mom must have taken scores of waterfall photos, but I told her, only two can go in this blog post.   After all, this is Colorado Traveling Ducks, not humans.

Walking along the main street in Skagway, Alaska, look what we saw.

Girls in the window

These girls in the window.   No, they are not going to jump.   They are inviting all to come inside to see the show. 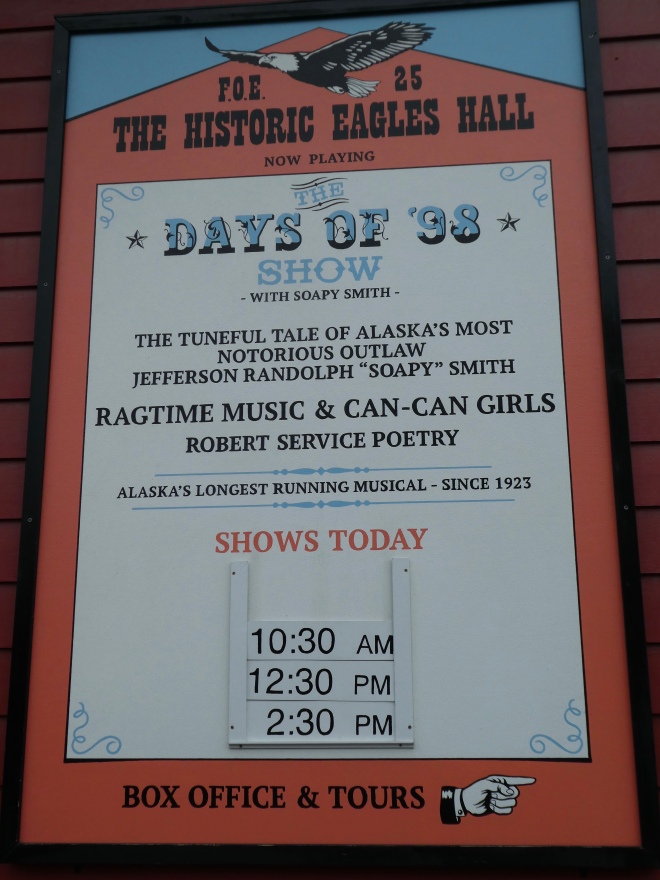 The Days of ’98 Show is the longest running musical in Alaska.  Mom, what is this all about, and why is Soapy Smith featured?   Our Soapy?  One of the Colorado Traveling Ducks is named Soapy Smith Duck.   Our duck was named after the notorious and clever outlaw, Jefferson Randolph Smith.   Jefferson Smith earned his nickname, “Soapy” while in Colorado.   The human Soapy moved around and eventually settled in Skagway, Alaska.   Let’s go inside and see the show.

Dancing in the saloon

The girls from the window are dancing, showing ruffles and garters.   Let’s check them out now.

Saloon girls on the bar

On the bar?   Mom, this is crazy and fun.   We like it.   The human Soapy Smith owned and managed this bar in Skagway.   He was well liked, but a little on the wrong side of the law most of the time.

This is Brad.   He was a chosen volunteer from the audience.   Brad was very gracious about this, and even let the girls get him in different clothes.   The saloon girls are fighting for Brad’s attention.

Soapy Smith with girl on the bar

This is the human Jefferson “Soapy” Smith with a saloon girl.   The entire musical was about Soapy’s life in Skagway, and also his demise.

Our very talented cast was wonderful and we all appreciated them very much.   This was a very enjoyable performance.   When you are in Skagway, we recommend that you see The Days of ’98 Show.    Now back outside.

And the necessary Skagway Brewing Company.   The history is preserved. 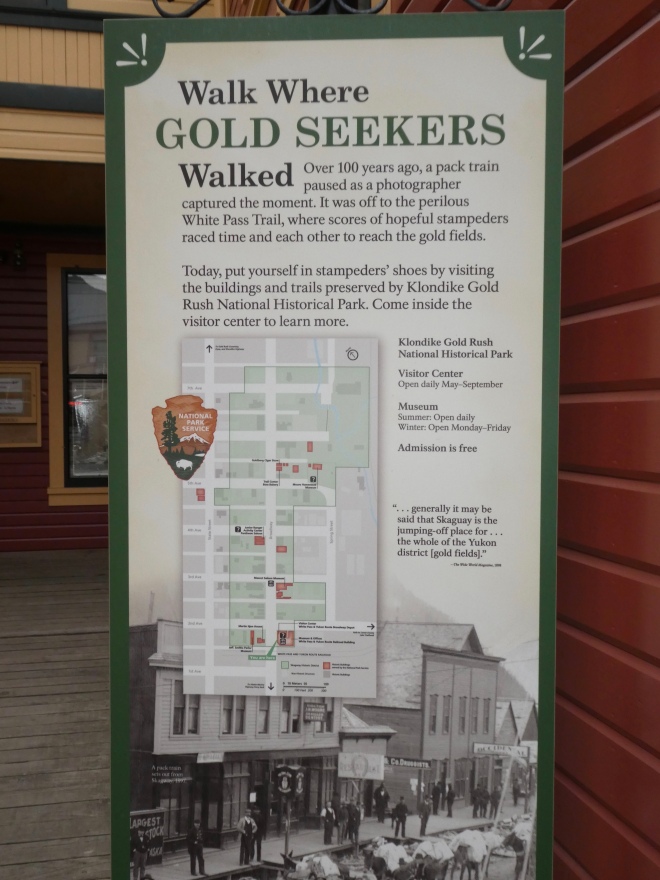 About the gold seekers

You can walk where gold seekers walked.

But I’m not sure I want to live like gold seekers lived.   People rushed to Skagway on their way to the gold fields.   The population of the town really grew, and quickly.  This is a great town to visit.