Driving through Broome, we entered the Kimberley.   Derby is one of the major cities here.   We loved Derby but we were fascinated by the Boab Tree.   This is the Boab Prison Tree.

Legend says that prisoners we put inside this tree at night, while being transported to Derby.    That is rather scary.   Back in Broome, Cable Beach is a wonderful place.   A meal or snack at Zander’s on the beach and fabulous sunsets viewed from a camel create unforgettable memories. 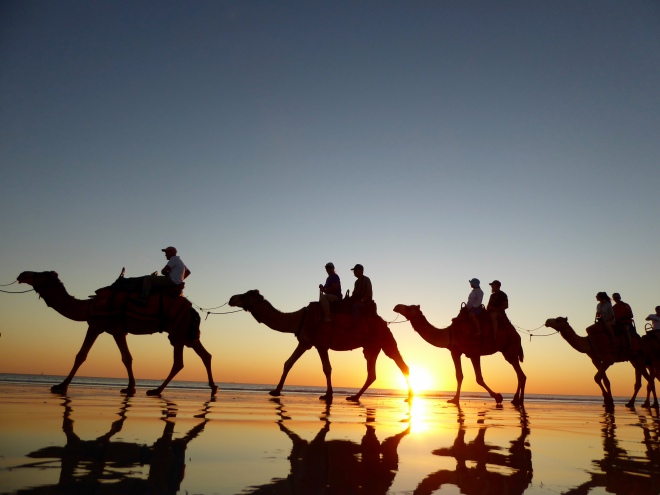 At Broome’s Town Park we were fortunate to witness Stairway to the Moon.

Stairway to the Moon in Broome, Western Australia

This experience is also forever in our memory.   Australia has many beautiful national parks.  There are over 500 Australian national parks.   In Kakadu National Park in the Northern Territory we gazed at Aboriginal Rock Art 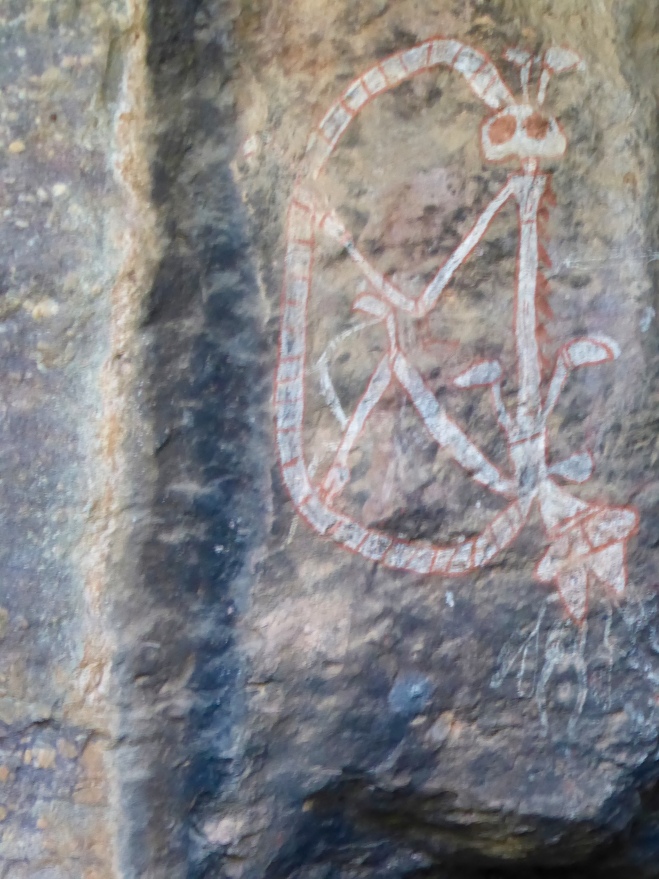 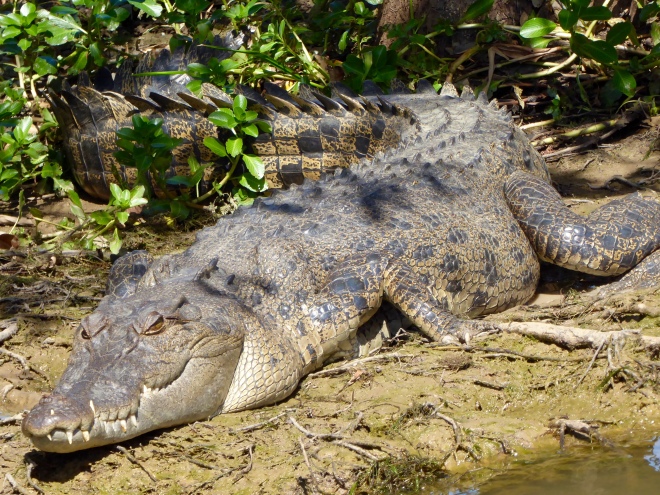 A really big crocodile at Kakadu

Thankfully the crocodiles were more interested in the warm sun than tasting Colorado Traveling Ducks.  We rode the Ghan, Australia’s other main railroad, to the red center of Australia.   Another fascinating train ride.   We believe sunrise at Kata Tjuta was beautiful. 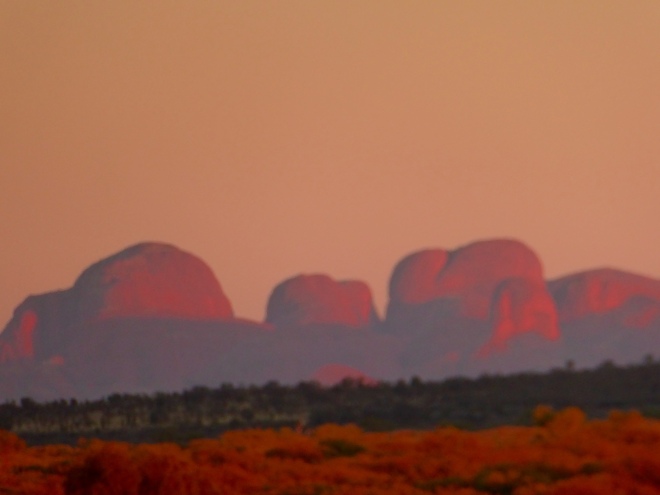 Not just a smooth rock

Scientists say most of the rock, or monolith,  is still underground.   The above ground height is 863 meters or 1,141 feet.   More than that amount is still hidden underground.   Next we took a public bus to Coober Pedy.   This opal mining town celebrated its 100th anniversary.

Inside an opal mine, the opal is beautiful in the rock. 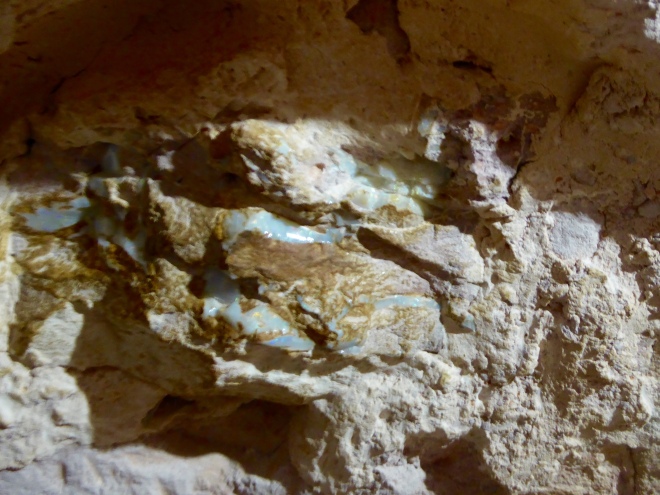 Just waiting to be mined.     Much of this town is underground, living in cave live areas.   The Underground Serbian Orthodox Church was spectacular.

A short flight to Adelaide and we rode another bus into the wine country.   Here we saw beautiful countryside and, of course, tasted some good wine.

Our time in Australia was so much fun.   Tomorrow we will finish our reflections of our wonderful vacation.

We arrived in the afternoon and immediately arranged to view Uluru, previously called Ayers Rock, at sunset.   The rock seems to change color as the sun begins to set. 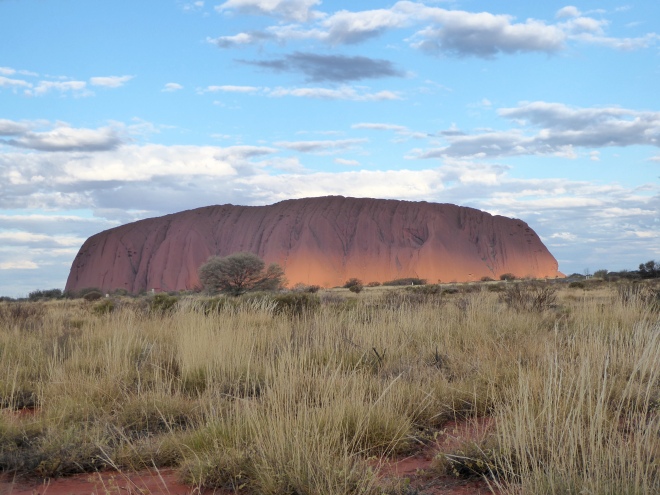 Uluru as sun begins to set

This is one of our favorite sunset photos.

The next morning we returned to view the sunrise.   The sun is hitting Uluru now, creating light and great shadows.

The rock is so large that photographs are difficult.   From Uluru, we could see the rising sun reflect on the Kata Tjuta formation.

The entire scene of sunrise and huge rocks is very impressive.   Later we drove around Uluru.   You can see the rock is not smooth.

Not just a smooth rock

The uneven surface and holes or small caves, make the rock more interesting and mysterious to us.   Many humans walk round the rock,and many climb Uluru.

Climbing Uluru can be dangerous and the native aboriginal people ask you not to climb their sacred sites.   We sat here close to the ground, but we did not climb Uluru. 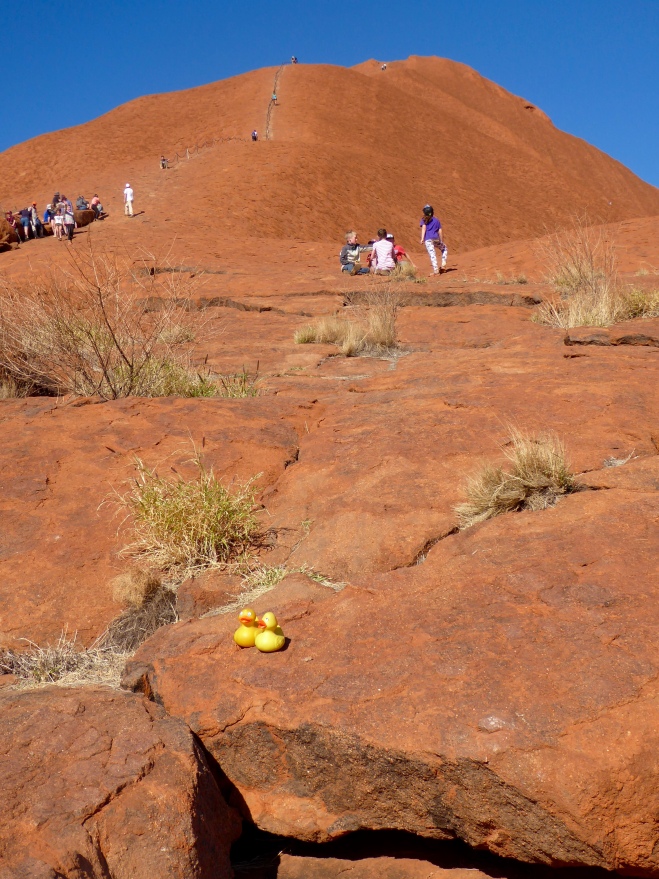 We did not climb. Just sat at bottom of rock. Aboriginals request no climbing.

It is very impressive to walk round the area, gazing at the 1,150 feet, or 350 meters of the giant monolith that is above ground. 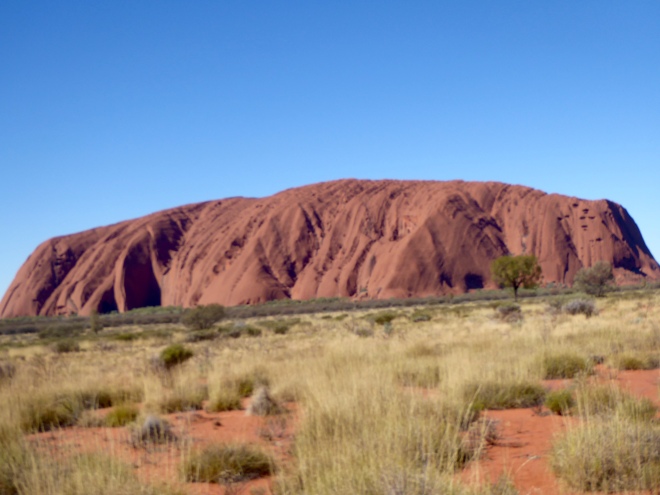 Uluru. Best appreciated from a distance to see whole thing

Geologists say that Uluru is the summit of a massive underground chunk of sandstone, about 600 million years old.    About 10% of the rock is visible.   Next we drove 20 miles (32km) west to Kata Tjuta, or the Olgas.   Kata Tjuta is  a cluster of 36 sandstone and arkose (sedimentary rock formed from granite sands).

Scientists believe Kata Tjuta was part of a giant monolith about 10 times the size of Uluru.   Kata Tjuta has fewer visitors than Uluru and there are no facilities or water available.    Also, no climbing on the rocks is permitted   There are several hikes around the rocks, but visitors must stay on the trails.    The winds were pretty strong when we were there.    This is the trail to the Olga Gorge.

We are getting closer. 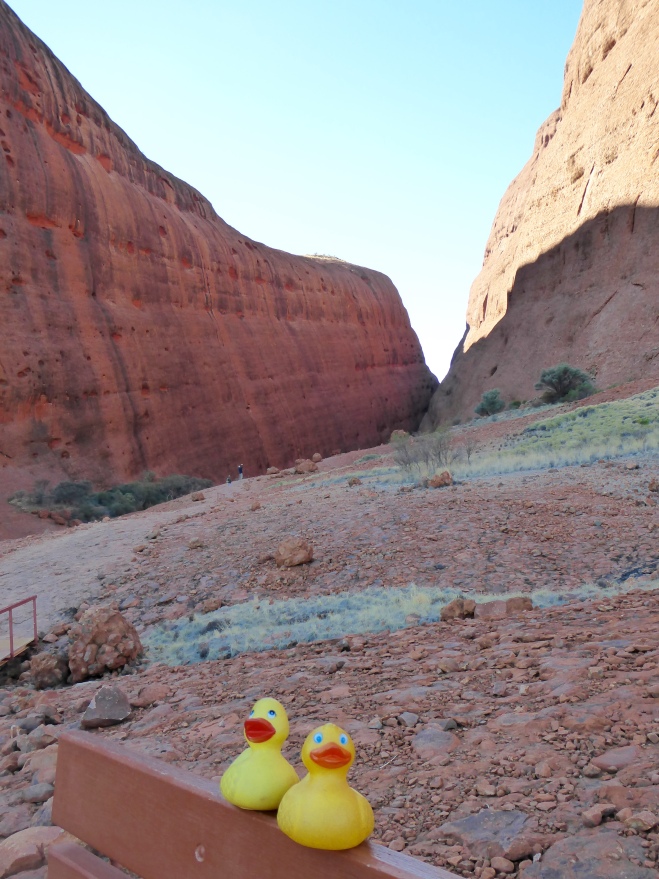 It is quite windy now.   People can hike to the gorge, but not climb on the rocks.