Zeb was on a battlefield.  And I survived!  Mom and I stopped at Little Bighorn Battlefield in Garryowen, Montana.

The battlefield is just off I-90 in southern Montana.  This battlefield is on the Little Bighorn River and is a national monument.   Some describe this battle as a clash of cultures. General George A. Custer, 36 years old and a Civil War hero, led 263 soldiers in a battle to defeat the Indians.  The battle did not go well for General Custer.  He and his men were defeated and killed by over 3,000 Indian warriors.  Unfortunately for Custer, this defeat overshadowed his military career, and all many Americans remember about him was that he was defeated and killed here.  He initiated the battle against the Indians, even though he was greatly out numbered.  (I believe that is an understatement)  Many believe that his defeat was the result of his ego.

We first stopped at the Visitor’s Center 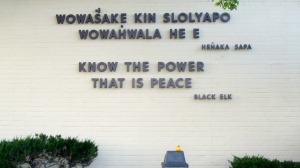 and watched a movie about the battle.  Then we walked to Last Stand Hill.

Here is a small cemetery where General Custer, his brother Tom and 39 other soldiers have stone markers.  General Custer’s grave marker is the black one, left of me.

There is a memorial on this hill.  Some U.S. soldiers are buried under the memorial. 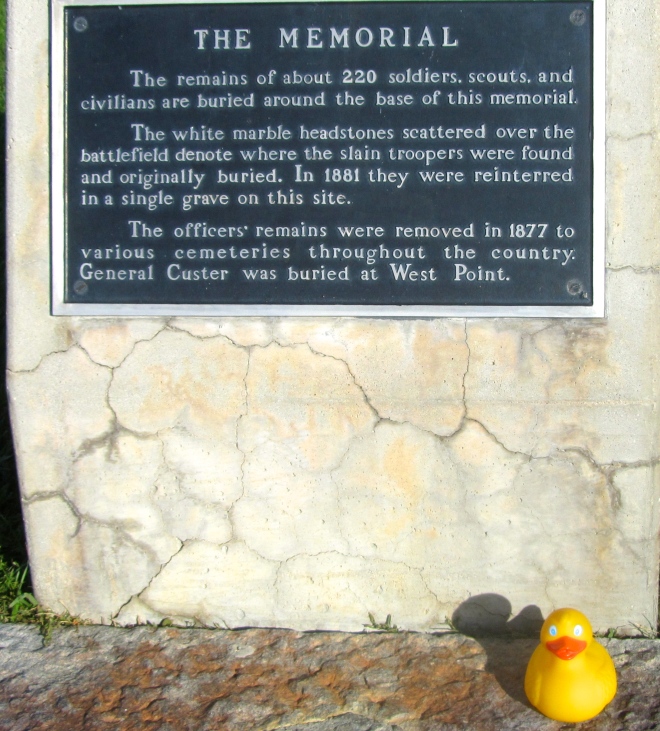 Base of memorial on Last Stand Hill

Their names are carved on the memorial. Near Last Stand Hill there is a marker for the horses that were killed here.  I love when humans give credit to the animals! 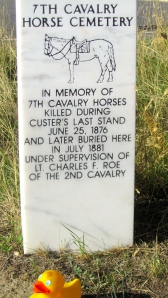 All around the battlefield I saw white stone markers.  The markers are where the bodies were found.  There are also red granite markers

showing where Cheyenne and Lakota warriors died.  There are many more white markers than red ones. Near Last Stand Hill an Indian memorial is being built.  It is not finished so we were not allowed inside the area.  However, the wire sculpture was partially visible.

The memorial will be very nice when completed.  I hope I can come back to see the finished project. A park volunteer told us that this was the last battle won by the Indians.  We walked along trails through the battlefield.

It was strange to see so many markers and know that soldiers and warriors died here.  This land has open fields, hills and valleys with many place to attack without being seen and areas of trees by the Little Bighorn River.   Lots of places where you cannot easily be seen. Next we drove along a 5-mile road.  This road took us to various sections where the battle raged.  We saw lots of grave markers.  We saw the river, the hills and valleys, the steep ravines and much more.  This land is important to all people.  Many remember the soldiers that died here in June 1876 and many remember the Indians that died here.  For many Indian tribes, this is sacred land.  This battlefield is located on the Crow Reservation.  Also located on the Little Bighorn Battlefield ground is a National Cemetery. 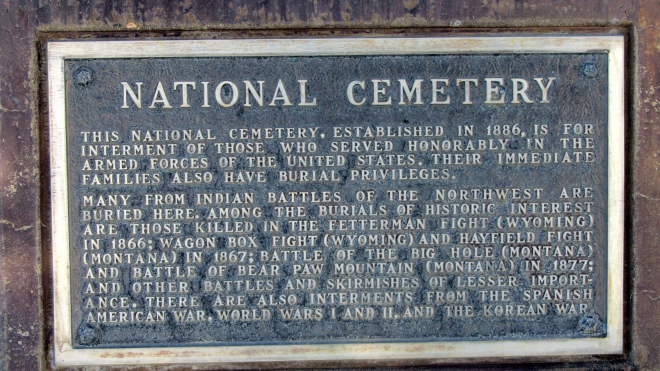 The rows of grave markers look just the cemetery in Arlington, Virginia. 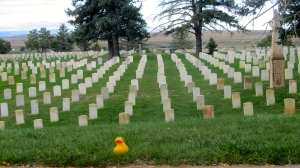 The cemetery has veterans of American Indian wars, the Spanish American War, World Wars I and II and the Korean war.  This is a sacred place for many people. You will love visiting Little Bighorn Battlefield.  There is so much to see and learn. This is a spiritual place for many.  Relax and you will feel the power of this land.  While you are here, walk around the fields and really feel this place.  For more information visit http://www.nps.gov/libi