Zeb the Duck and Channel the Bear took their moms and the Light Rail train to Denver’s Union Station.  The newest Light Rail station into Denver is in nearby Westminster. 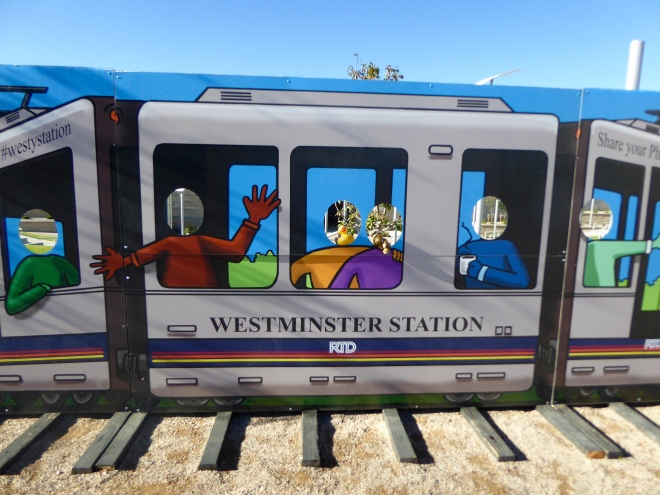 Sitting inside, Zeb the Duck and Channel the Bear admire this arch. 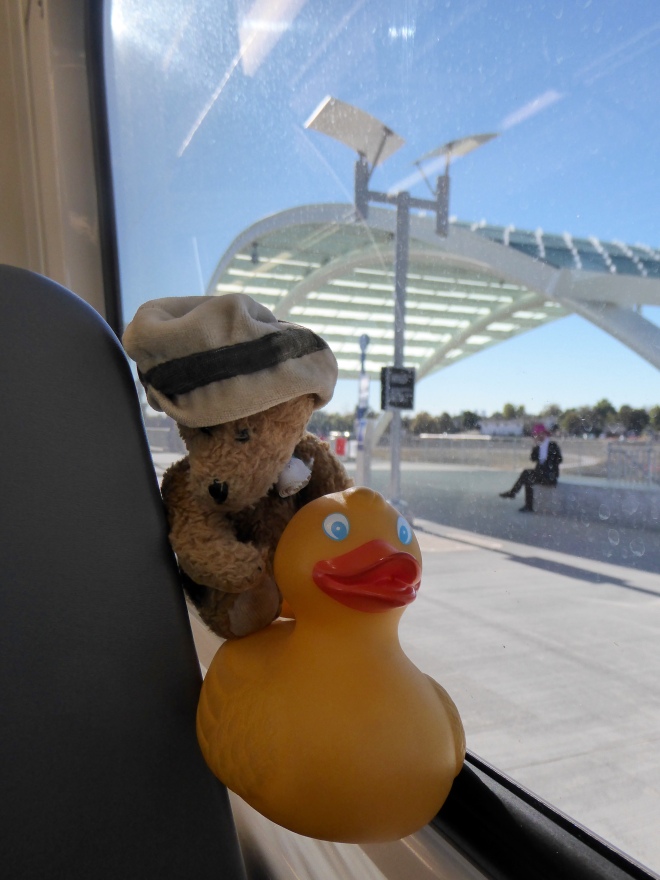 On the train admiring arch

Arriving at Denver’s Union Station, safety is emphasized.   In many places we saw lists of Dumb Ways to Die, the list ending with safety reminders for the Light Rail. 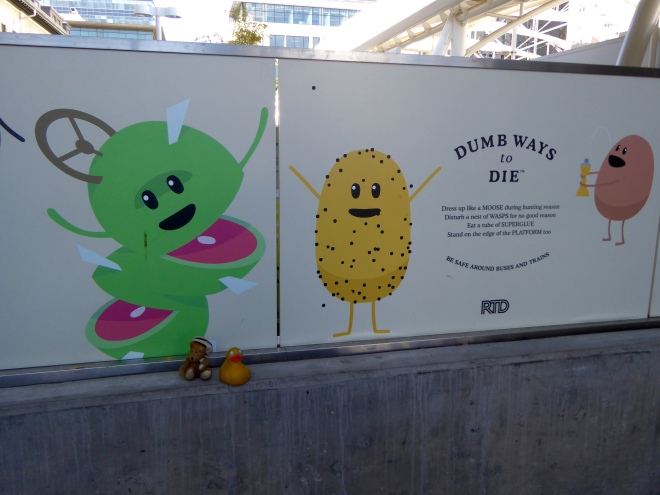 Be careful. Don’t be careless 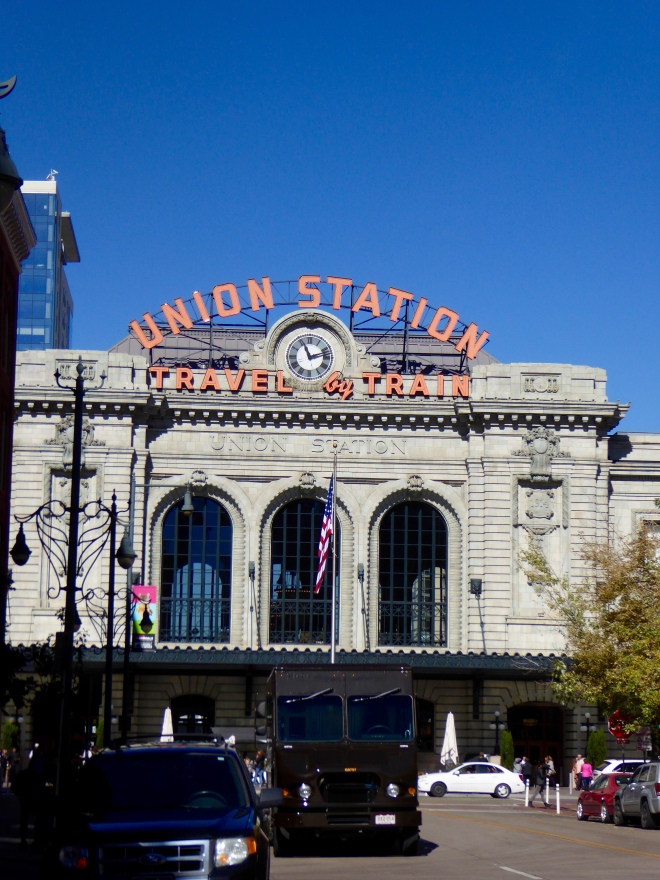 Here is the Terminal Bar. 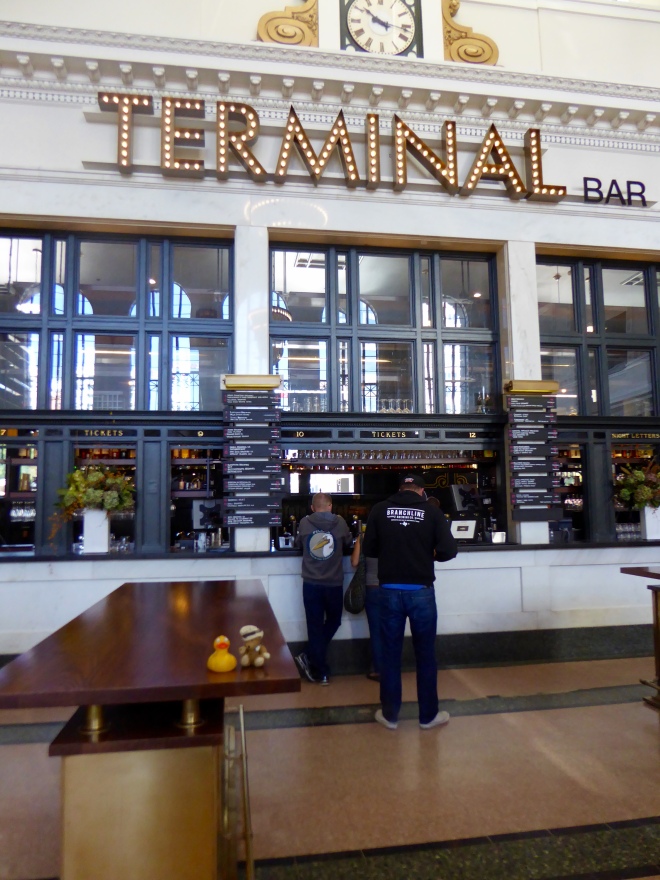 Even though it is called a bar, much food is also served here.   After exploring Union Station, we head outside, and see Octavia the Octopus. 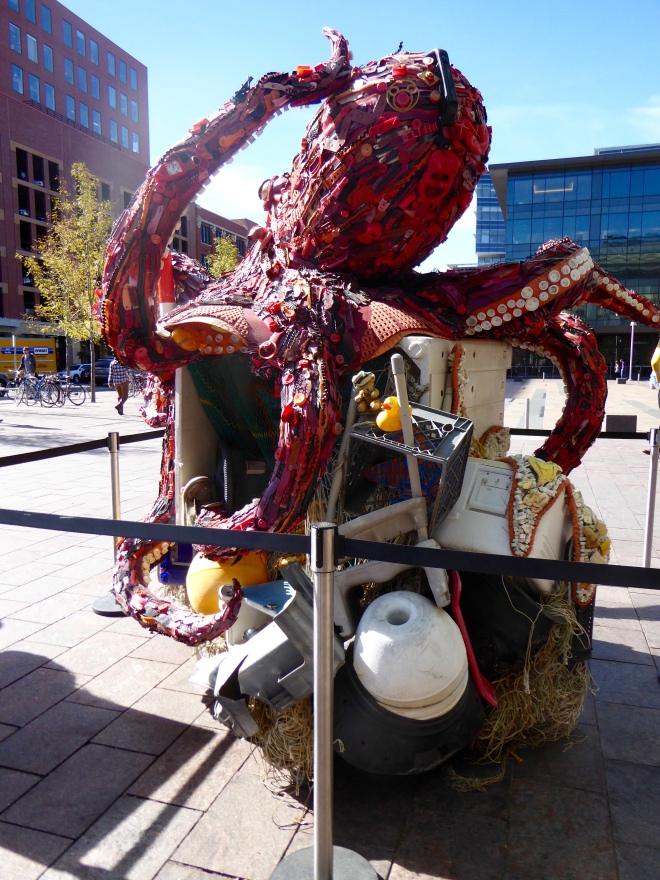 Octavia the Octopus from WashedAshore.org

She is made entirely from trash that washed up on beaches.     Visit  www.WashedAshore.org for more information about this program.  We learned that an octopus lives about 4 years, but grows to 20 feet in length.   They are also very intelligent animals.   Denver’s oldest hotel, Oxford Hotel, is located half a block from the train station. 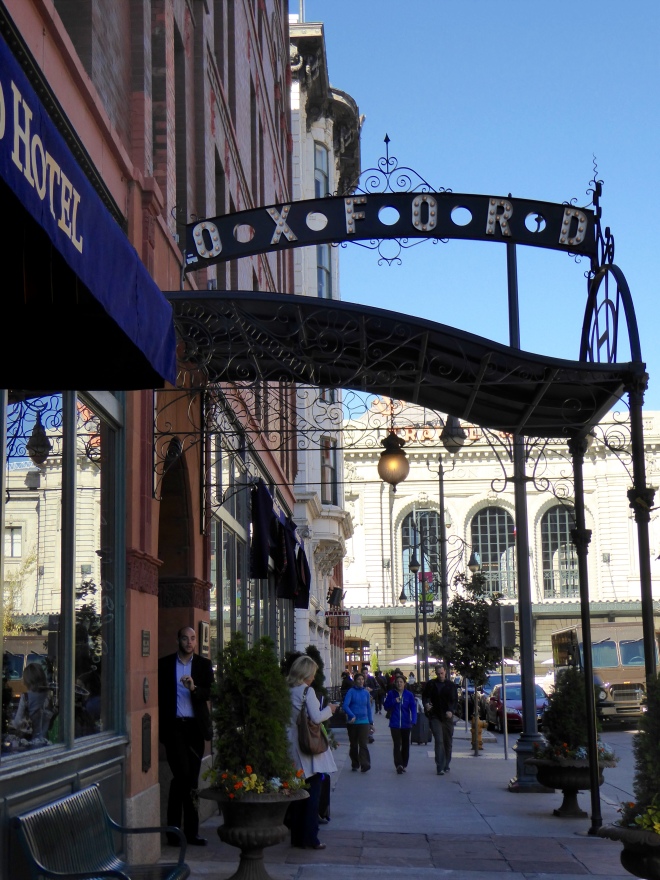 The Oxford opened for business in 1891 and an elegant room rented for $1 per night.   Or, $2 nightly for an elegant room with a bath.   It certainly costs more than that now.   Our human moms took us inside and then, inside the ladies room. 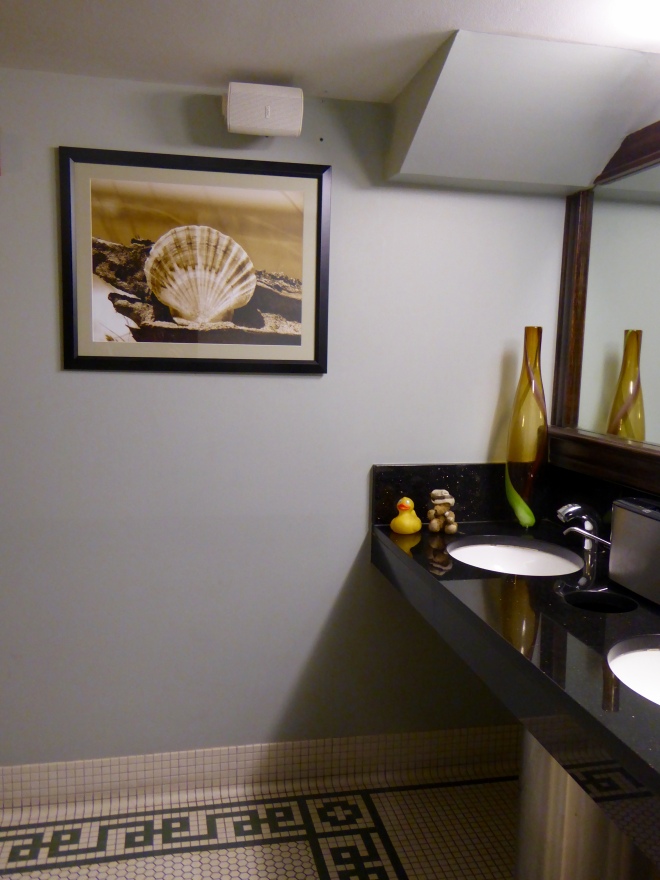 They said this is classic elegance.   The bar is cozy and intimate.   We appreciated the murals on the wall.

One of several murals in bar at Oxford Hotel

Next we went to the Ice House. 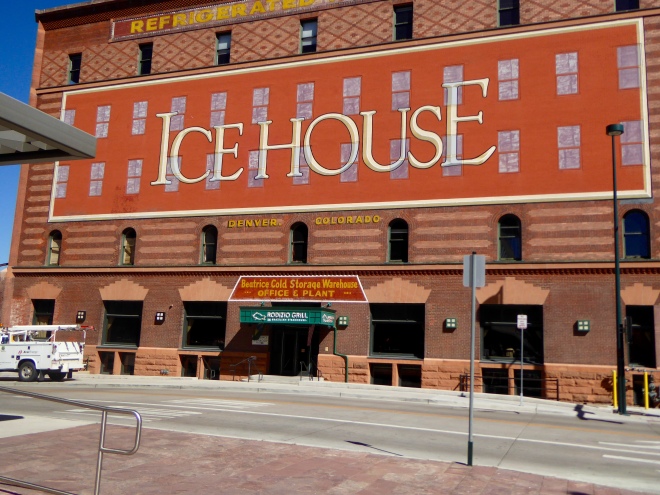 The Ice House had been built as a cold storage facility for Littleton Creamery, later to be sold to Beatrice Foods for cold storage.  Used for 80 years as cold storage warehouse, when the building was abandoned, windows soon were broken out.   Now the entire building was frozen. During restoration, the first step was thawing.   This took about one year.   Wow!  Great construction for cold storage.   Many offices, business and condos are located in this building now.   On the ground floor is the Brazilian steakhouse, Rodizio Grill.   We did not eat here today, but the humans have eaten here previously.   They say the food is good.  Walking in downtown Denver, we saw this plaque about the first robbery of the Denver Mint. 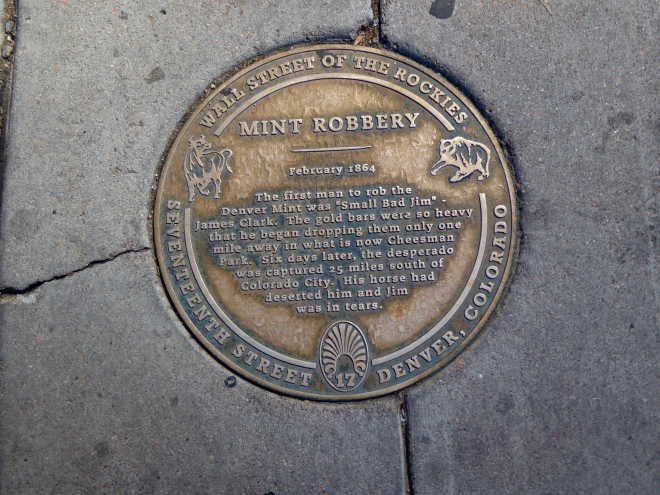 This is one time our humans feel bad for a thief.   It really is rather sad how this ended for him. Colorado became a state in 1876.   The first City Hall was at this location near Larimer Street and Speer Boulevard. 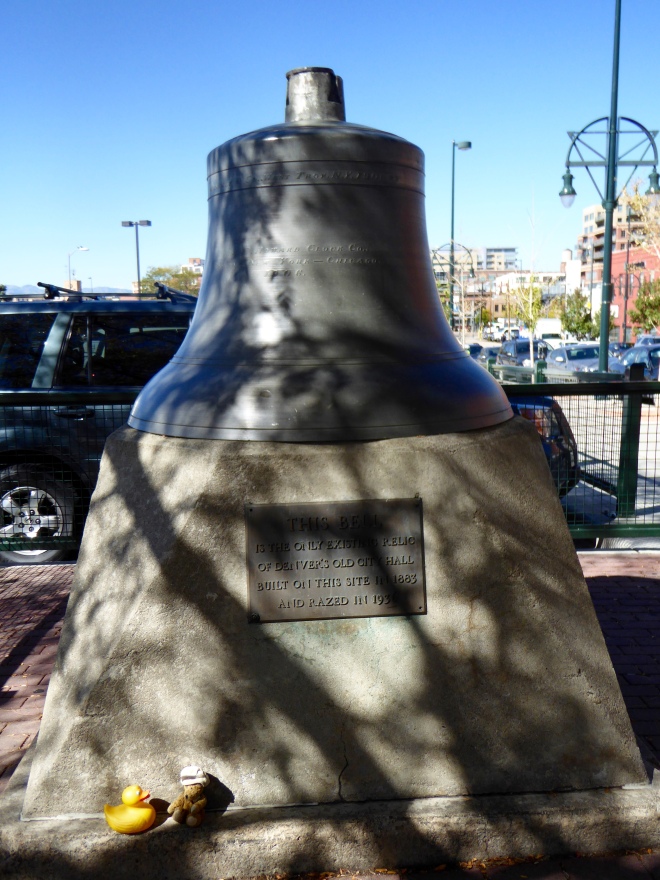 This bell is the only existing relic of our first City Hall.  You remember Soapy Smith Duck, one of the Colorado Traveling Ducks.   He is named for a real rascal, Soapy Smith.   When the human Soapy Smith was in Denver, this was one of his favorite places. 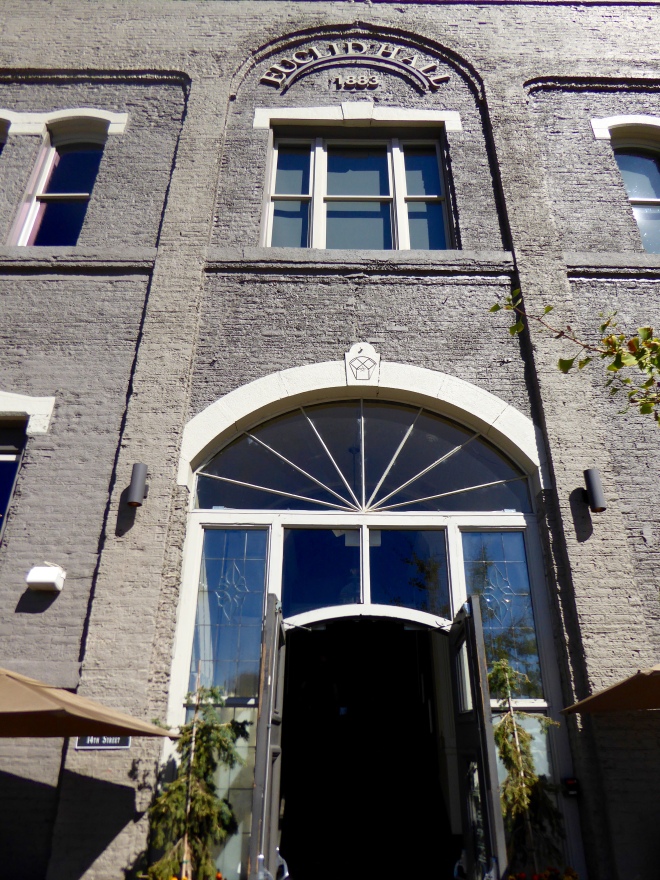 Here, across from the first City Hall, a governor tried to fire corrupt commissioners, but a force led by Soapy Smith, changed the governor’s mind.   Along Larimer Street, we stopped in this courtyard.   There are restaurants here and it is a nice area for a meal.  This statue, from 1924, is in memory of Richard Pinhorn. 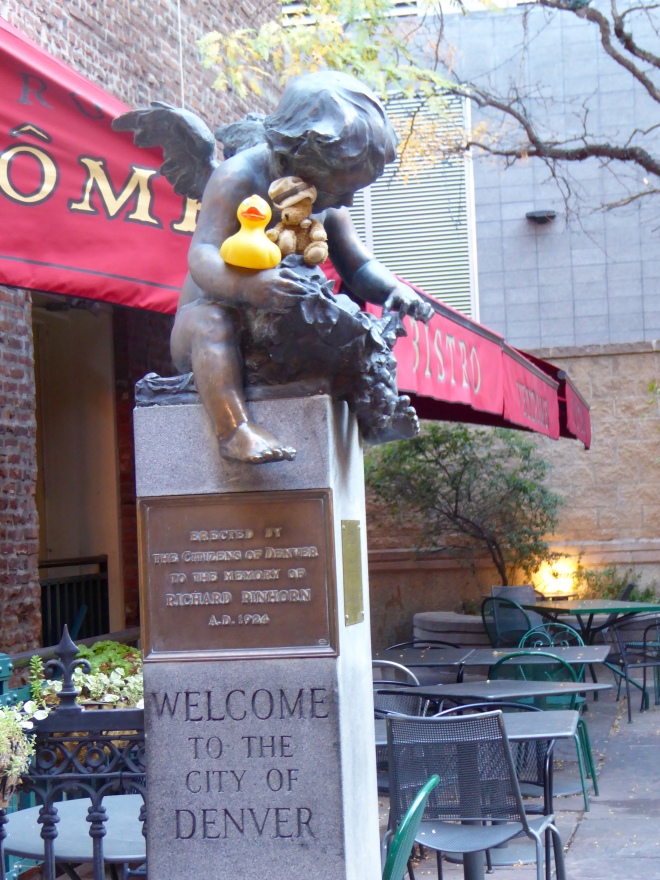 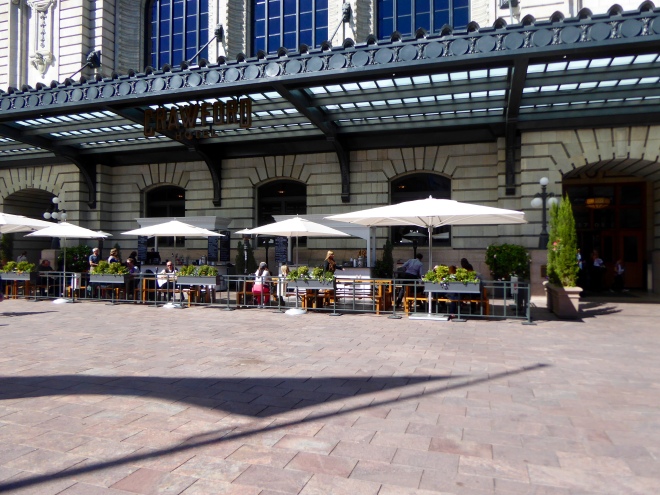 Then back to the Light Rail train, and we will be delivered to our car in 9 minutes.   That is fast!