We are still in Whitehorse, Yukon Territory.   We love it here.   This morning we wandered around town, found a grocery store and purchased snacks for our room.   Yep…Humans and ducks love to snack.  Now we are heading to Yukon Beringia Interpretive Center. 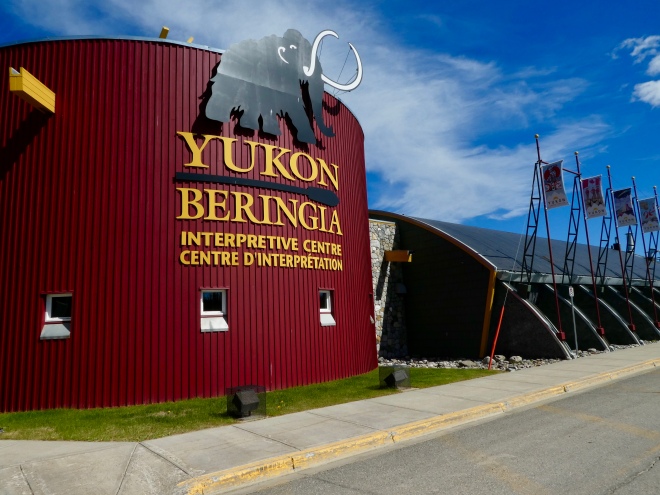 This is a great cultural and historical place.   We didn’t go inside, we just looked at and admired the vast outdoor exhibits.   Never enough time to do everything.  Meet Woolly Mammoth. 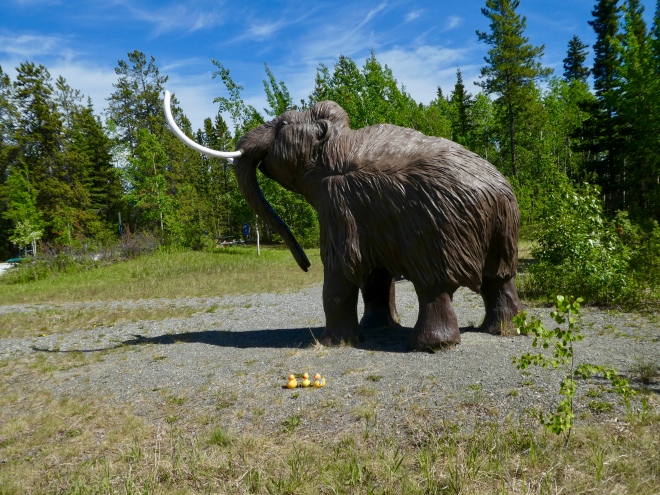 He used to live here.   Doesn’t he remind you of a shaggy elephant with smaller ears?   I think so.   Oh look. 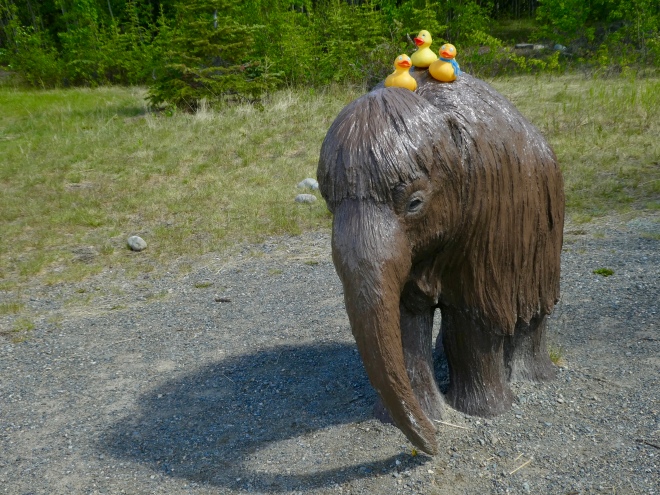 This Woolly Mammoth is closer to our size.     Can we go for a short ride little Woolly Mammoth?   Apparently not.   The sign says carcasses of Woolly Mammoth have been discovered here.  Carcasses, complete with hair, skin and internal organs have been preserved in the Beringia permafrost.   These giant animals lived here tens of thousands of years ago.   They survived periods both hotter and colder than today’s temperatures.   This is the biggest beaver we have ever seen. 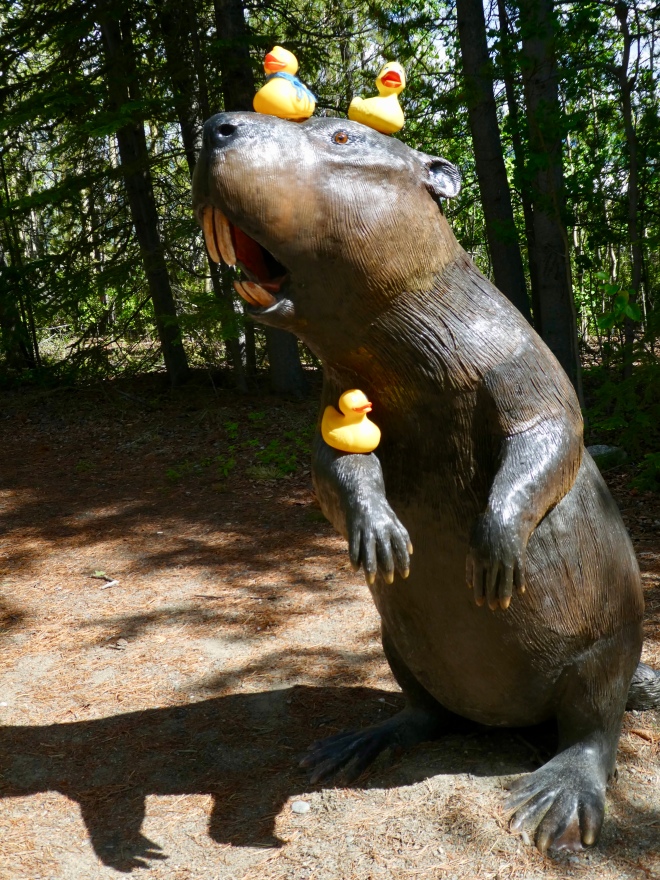 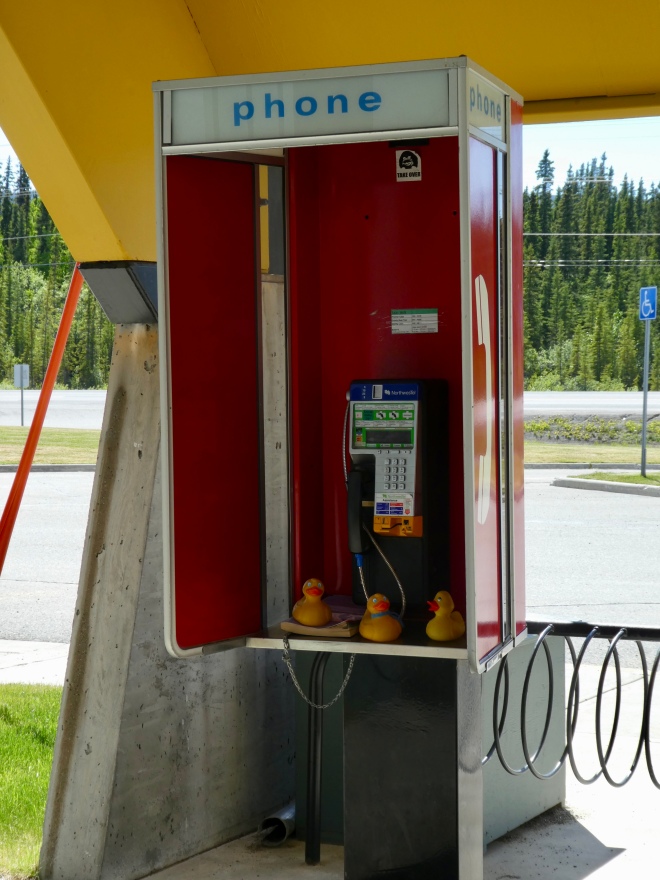 A pay phone?   Once very popular and common in the United States, it is rare to find a pay phone at home.   Now most people carry a cell phone.   We like to see phone booths.   Here is an Eskimo in his canoe, or kayak. 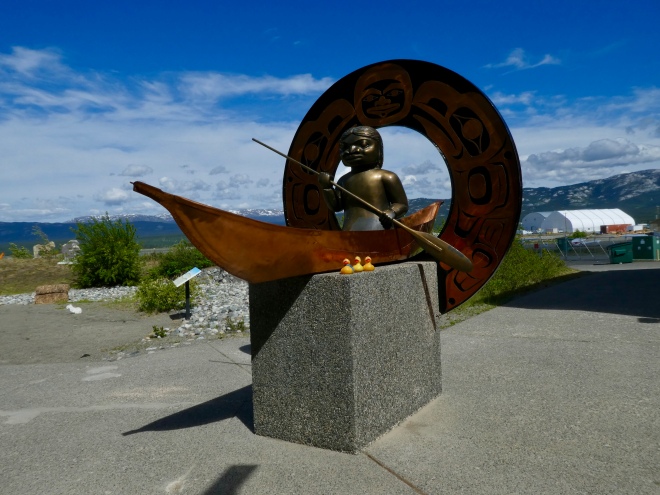 The common way to travel the Yukon River and other bodies of water during the summer when the water is not frozen.   OK, what other animals formerly called this Beringia area home? 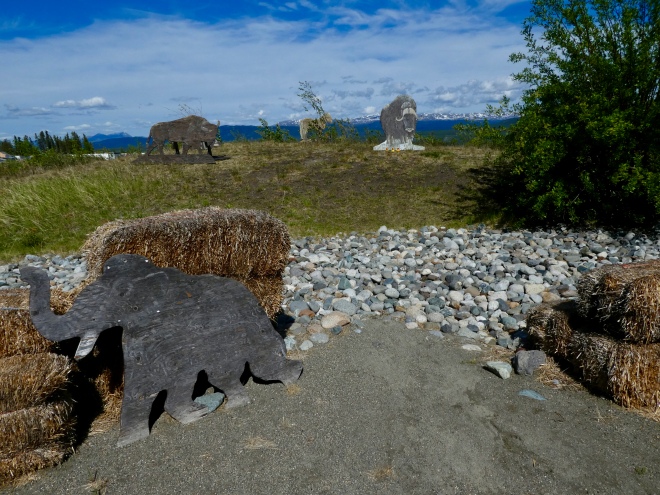 We recognize this musk ox.  We ducks are in front of him.  He resembles Africa’s Cape Buffalo.   Notice that these animals all need heavy skin and thick coats to survive the brutal Yukon winters.   We like seeing animals.   There are many signs here explaining the permafrost.   The ground never thaws a short distance from the surface.   One result is surface water cannot penetrate the permafrost, so the soil above permafrost is quite wet.   If the permafrost does melt, due to natural weather or human actions, the melting permafrost causes the ground to be unstable.   This place makes us think about so many new things.   Also, signs show how to read the story of climate change in riverbank layers. 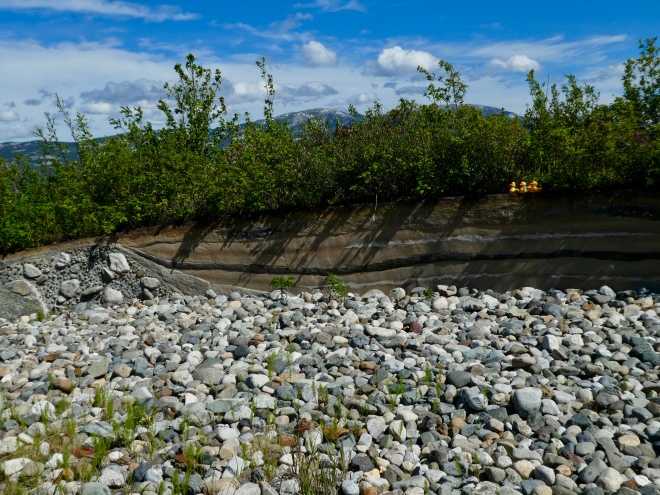 We can see several layers in this riverbank.   These are natural layers, not things cemented together.   So much to learn.   So little time.   We are now headed to the Yukon Transportation Museum.   We will show you what we find next time. 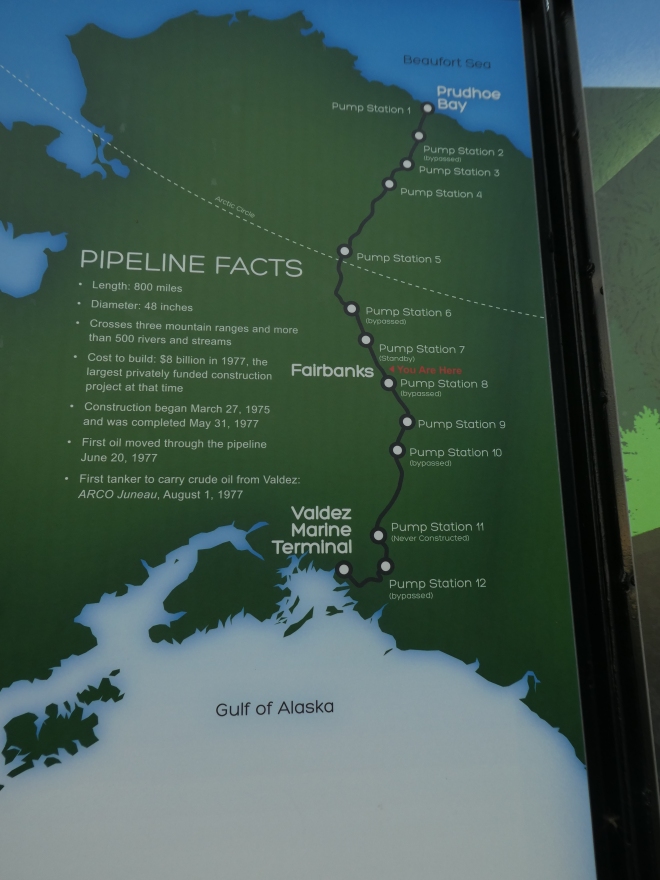 The pipeline was built to transport oil from the Prudhoe Bay oil fields, north of Arctic Circle and near the Arctic Ocean, to the ice free port of Valdez.  This was a very big engineering accomplishment in the 1970’s. 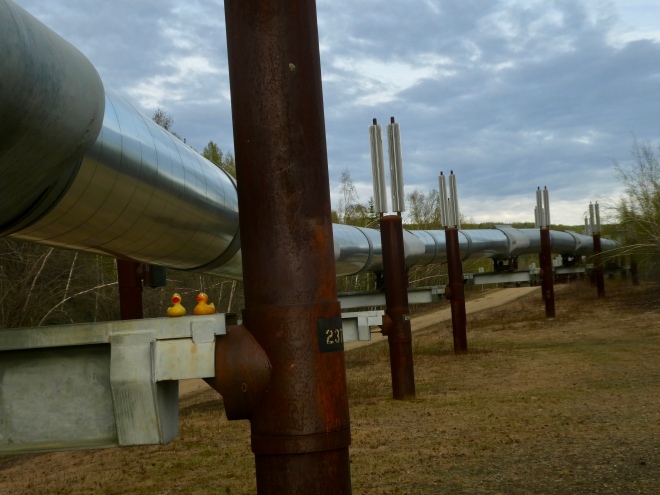 Zeb and Eider on the Alaska Pipeline

While this looks like the pipeline is rather low to the round, it isn’t.   Mom could hardly reach this ledge for us to sit.   This pipeline is 800 miles (1300 km) long.  An average of 1.5 million barrels of oil are transported through the pipeline every day.   It takes 11.9 days to reach Valdez.   The oil travels at 3.7 miles per hour (6 kilometers per hour).   There is a constant need to clean the inside of the pipe. 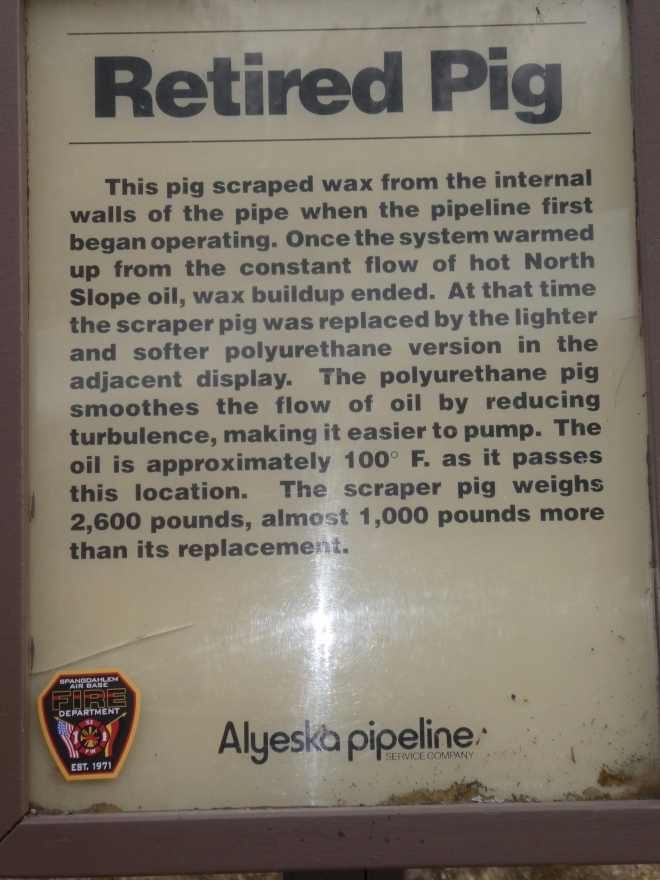 Pigs in the Pipeline

Items, called pigs, are put in the pipeline at Prudhoe Bay, for cleaning and other maintenance reasons.   Let’s look at the original and the current pigs. 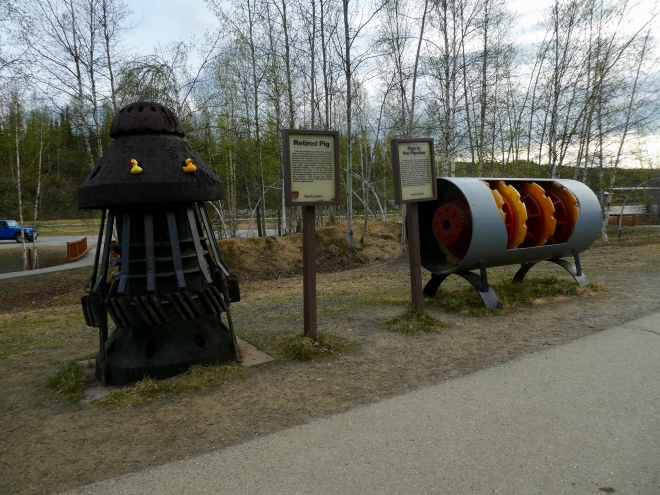 They have made changes since 1977.  The pipeline is elevated to protect the frozen ground.  Oil from the ground enters the pipeline at 120 degrees F (49C).   The oil cools to 111 degrees (44C) while traveling through the pipeline.    Permanently frozen ground is called permafrost.   If this permafrost thaws, the ground becomes unstable.   This is not good.  The pipe is insulated to keep the ground cold and release the heat into the air.   Also, moose, caribou, and reindeer migrate through much of northern Alaska.   These large animals must be able to walk under the pipeline.   An Alaskan moose is often 6 feet tall.   Sometimes the pipeline is underground. 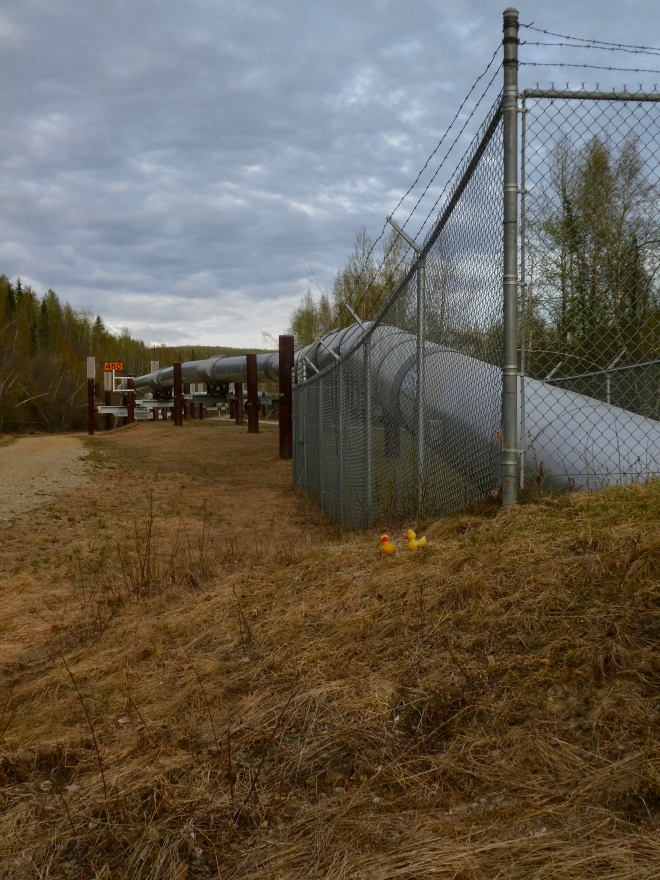 Here we can see the underground pipe breaking through the earth’s surface and continuing above ground.   When the pipeline is above ground, it has a zig zag pattern.   This zig zag layout allows for movement in the line, caused by heat, weather conditions and earthquakes.   This part of the Alaska Pipeline is south of Delta Junction, about 120 miles from Valdez. 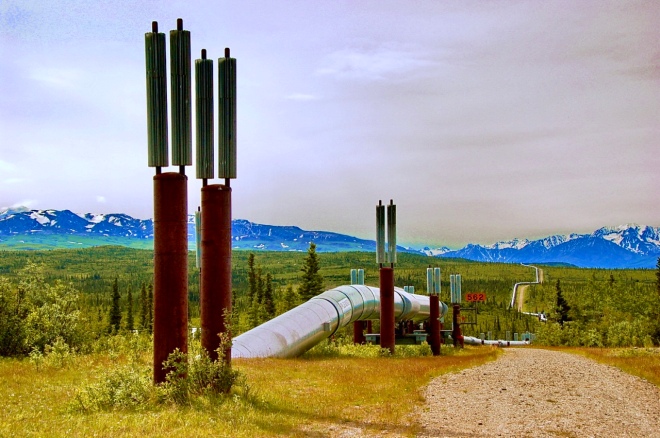 From the hill, you can see the zig zag pattern of the pipeline, heading toward the mountains.  Before building the pipeline, a 360 mile road from the Yukon River to Prudhoe Bay, needed to be built.   This road is used by excellent truck drivers, all year, to carry supplies to the people working in Prudhoe Bay.   The frozen area, north of the Arctic Circle, is difficult for construction.   The frigid winter temperatures, ice, wind, and snow, make living and driving conditions very difficult.   We, the Colorado Traveling Ducks and humans are in awe of those that built, maintain and work in these conditions.