Today is not a sunny day, so we are going inside to explore.   I, Zeb the Duck, arrive at the Golden (Colorado) History Museum. 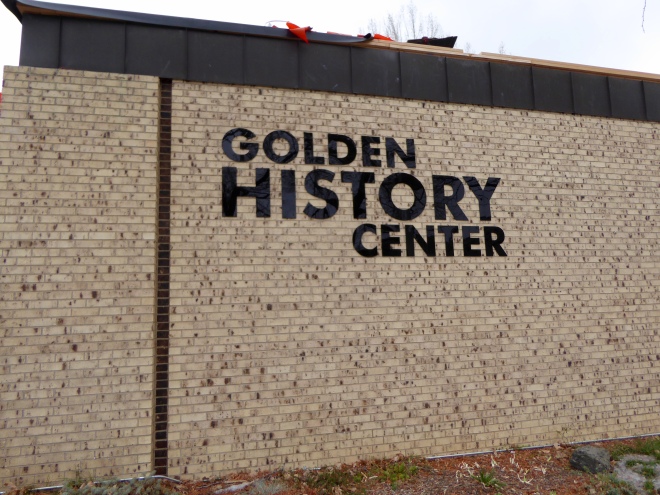 Golden is a town a little west of Denver, between Denver and the Rocky Mountains.   Let’s go inside and learn more about the city and early residents of Golden, Colorado.    First I wander around the section featuring innovators from Golden.   Spyderco, a Golden based company produces knives in 5 countries.

They produce 6,000 knives per month.   All the US knives are made in Golden, Colorado.   In 1970 Sal and Gail Glesser patented a triangular ceramic knife sharpener.   Soon they were making knives.   Their major innovations include, the trademark round hole, the pocket clip and a serrated folding blade.   Epilog Laser has called Golden home since 1993.   They are one of only 4 companies in the world to produce low wattage CO2 lasers.   Epilog designed these skateboard decks. 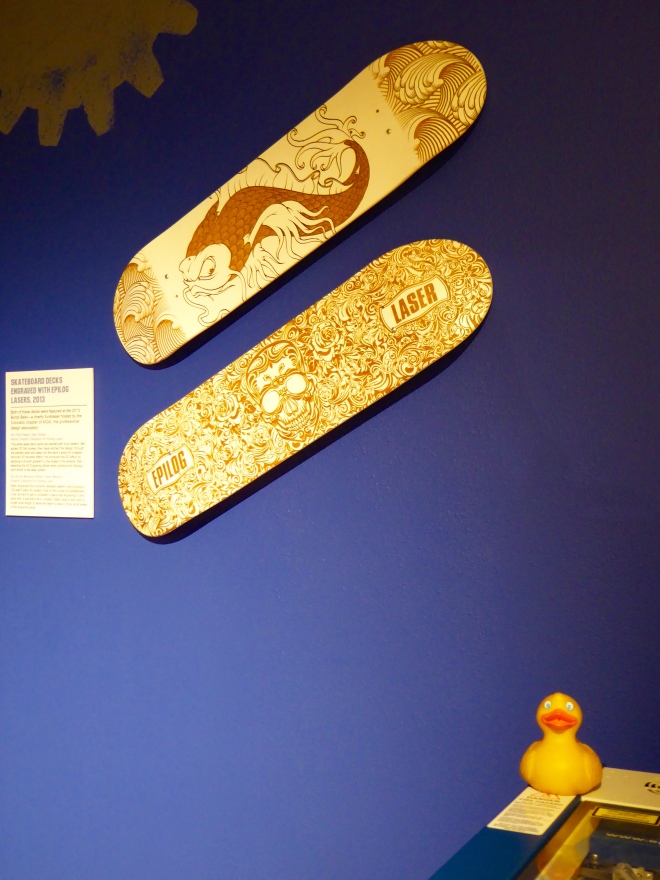 Boppy Pillow, since 1989 has manufactured this feeding and infant support pillow.   American Baby magazine gave its “Best of the Year” award to Boppy Pillow. 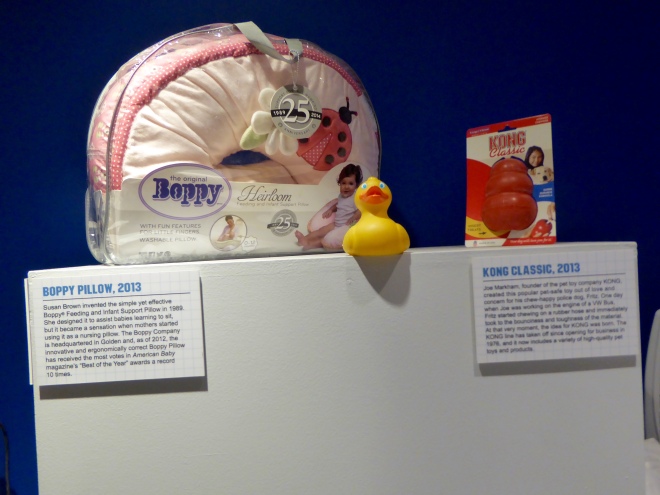 Kong, a pet toy company was founded in 1976 in Golden.   Joe Markham was inspired by his dog when the dog chewed on a rubber hose from a car he was repairing.   Joe noticed the dog enjoyed chewing on the strong rubber and Kong was started.   Mountainsmith manufactures a Frostfire line of backpacks.

In 1858, David K. Wall, bringing a wagon full of seed from Indiana, became Golden’s first permanent resident.  Other Golden residents were those seeking their fortunes in mining camps.  Within a week, David Wall, had plowed and planted 2 acres.   David dug ditches to divert water from Clear Creek and used this hand held steel seed planter.

Soon he was making his fortune selling fresh vegetables to the miners.   However, when Golden, Colorado innovative companies are mentioned, Coors Brewery is a real leader.   In the 1950s Coors knew beer cans needed to be redesigned.   The steel cans gave the beer a metallic taste.   The 3 piece cans tended to leak.   Beer needed to be pasteurized to kill bacteria.  And steel cans were too expensive.   Beer cans were Coors biggest single expense.   Soon Coors designed and produced a 2 piece aluminum can. 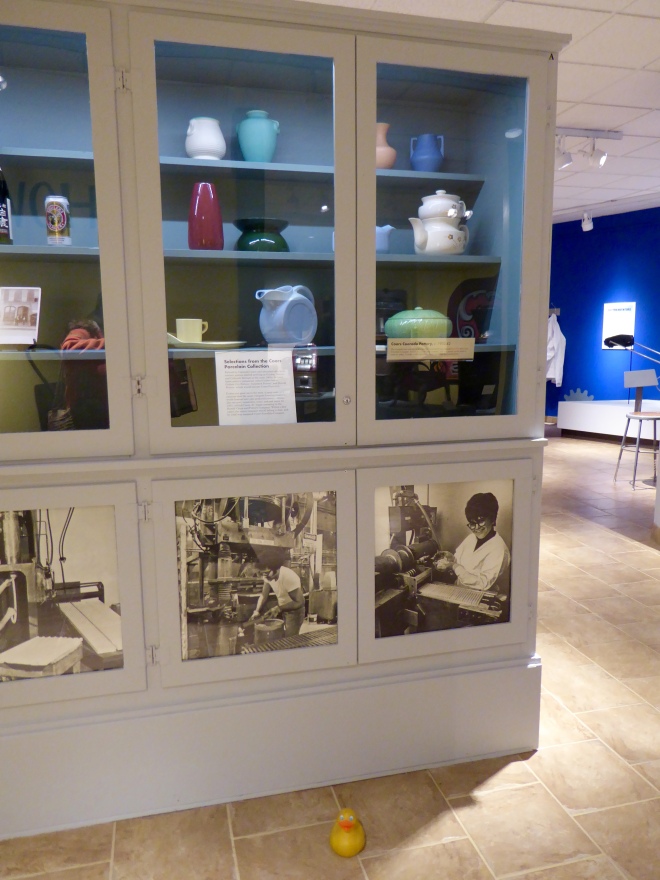 From 1934-1942, they also produced the most popular dinnerware of the time, known as Cook N Serve. 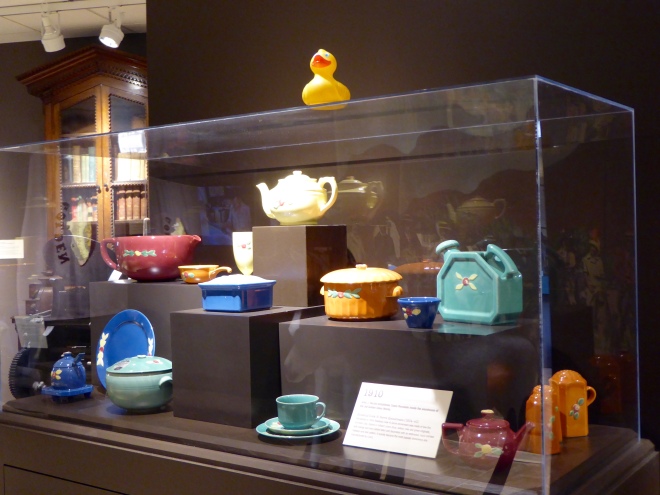 This large pink item was developed for the US Military.

It is a missile nose cone which carried complex electronic equipment that guided the missile to the target during the Cold War, after World War II.   Coors also produced porcelain for body armor and items for the US Space Program.   Coors Porcelain is now called Coors Tek.   In 1916 Colorado banned the sale of alcoholic beverages, 4 years before the official Federal Prohibition Laws.   To survive, the company produced a non alcoholic beer and also adjusted the brewing production lines to produce malted milk. 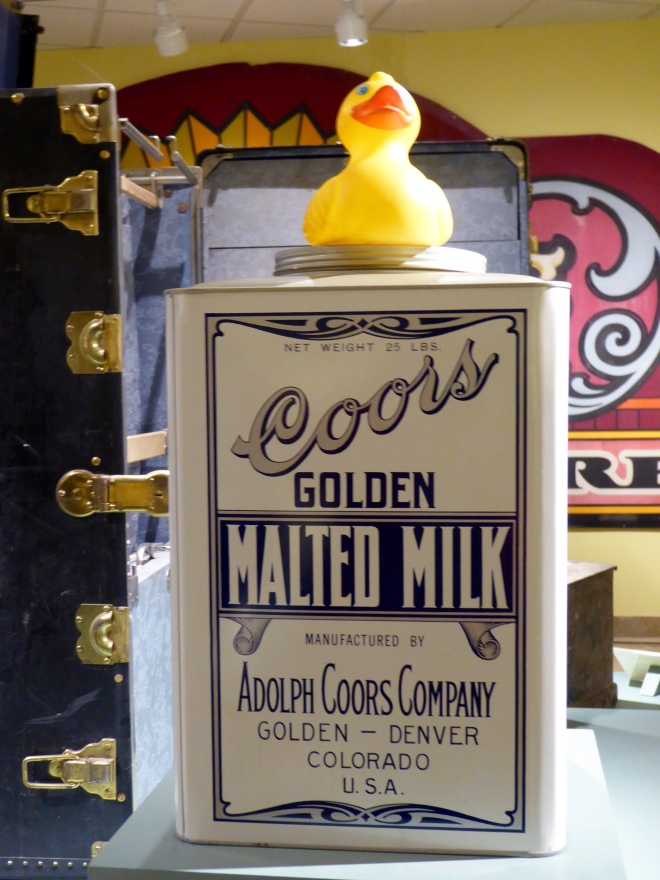 By 1925 Coors was the main supplier of malted milk to Mars Candy Company.   Mars makes Milky Way, Snickers, and other candy bars.  Another part of Golden History Museum showed me items previously used in Golden.   J. J. Thomas Blvd honored a former Golden resident when he won a bronze medal for half pipe snowboarding during the 2002 Winter Olympics in Salt Lake City, Utah, USA.   Golden’s main street was renamed for his weekend homecoming.

This Hotpoint electric stove was used at the Golden Waffle Inn, which opened in 1927.   Golden Waffle Inn was famous for its fried chicken and waffles.   In 1869, you could get a shave, a haircut and a hot bath at the barbershop. 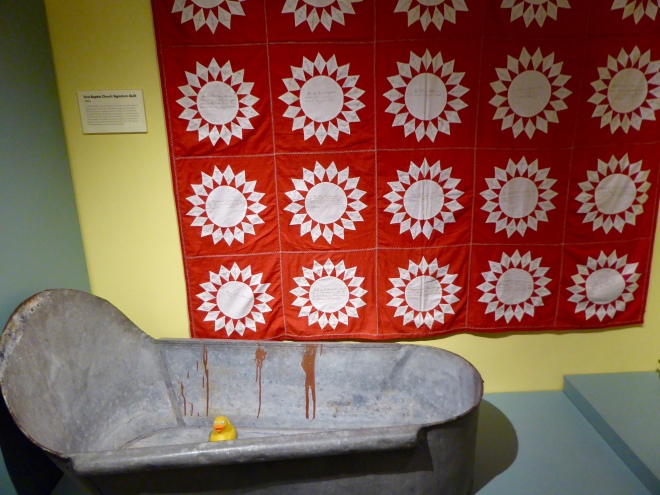 Above the tub is a hand made quilt presented to Seth Lake, deacon of the First Baptist Church. Here is a Western Saddle, probably used by a child or teen in Golden in the 1890s.

This Rockwell Clay Mine Ore Cart was donated when the last clay mine closed in 1910. 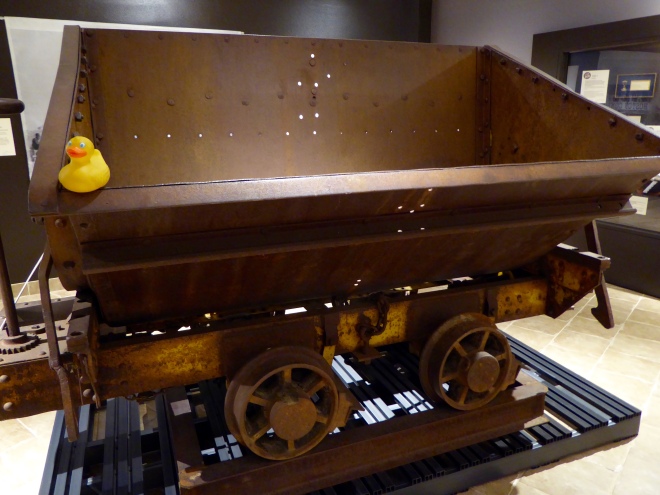 There was so much more to see at the Golden History Museum.   On an indoor day, we suggest that you visit a nearby museum.   There is so much to see and so much to learn.   We liked it a lot.