We have a great museum in Denver. We visit the Denver Museum of Nature and Science often.   I, Zeb the Duck, and Soapy Smith Duck wanted to see dinosaurs.  Before we even entered the museum, we saw dinosaurs by the parking garage.

By the parking garage

Dinosaur by elevator to parking garage

As we entered the museum, we were greeted by T-Rex.  He weighed about 7 tons and could run 25 miles per hour.

T-Rex had a long tail for balance as he walked on 2 legs.  His small arms were for holding prey and to help him get up from a resting position.   T-Rex had really powerful jaws and neck muscles.

What a big, powerful head

You would not get away from this guy.

Heading to the second floor to visit Prehistoric Journey,

This is a great display

we saw plesiosaurs.  He is called the ancient swimmer of the deep.

Wouldn’t be our favorite swimming mate

We ducks do not want to swim with him.

Entering Prehistoric Journey we saw dinosaurs everywhere. This skeleton is of walking fortress.

You can see how he got that name.   Walking Fortress has small teeth and a wide body so scientists believe he was a plant eater.

This long necked dinosaur is about 150 million years old.

The duckbilled dinosaur, or Hadrosaur,  is impressive also. 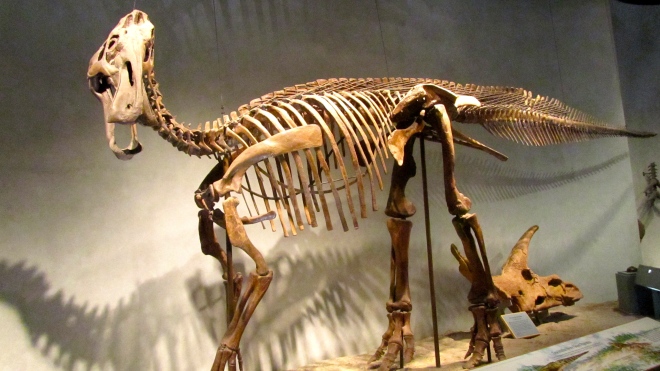 Duckbilled dinosaur has a toothless beak, but behind that beak each duckbilled had tightly packed teeth, as many as 1,000 at a time.  When one tooth wore out, another replaced it.  No dentures for dinosaurs.

We saw lots of dinosaur exhibits.

You will want to see these.   The name of this exhibit is Prehistoric Journey, so there are more than dinosaurs here.

Look at what lived in the Nebraska woodland about 20 million years ago.

He lived in Nebraska about 20 million years ago.

This “Big Pig” looms menacingly as it catches sight and scent of prey.  This big pig was both a predator and a scavenger.  These pigs lived and traveled in herds.

We liked this exhibit and we like dinosaurs.   But we are little ducks and we are very happy that these big animals are not walking around here today.   We hope you visit our museum or a museum near you.  Museums have so many fascinating things to see and you can learn so much there.

You will love all the dinosaurs.