After leaving Palomas, Mexico, we drove across the desert, along the US-Mexico border.   The sky was dark, very few vehicles on the road, but we enjoyed the night drive.   Many times the only lights visible were from the old international border wall.  After a little more than one hour, we arrived in El Paso, Texas.   Checked into our rooms, spending a couple days in El Paso.   Walking in El Paso, our humans wanted to walk across one of the international bridges.   We went into the customs area to see if we could take Soapy Smith Duck’s dog Chloe into Mexico, and then back into the US.  We did not have Chloe’s record of shots, but we did have her rabies tag.   After seeing Chloe, talking to the humans, checking passports, Chloe was allowed into Mexico and was assured we could bring her back. We would definitely return before these border agents were finished woking for the day.

Soapy Smith Duck’s mom and dog, Chloe, ready to cross into Mexico.   This is the second day in Mexico for Zeb and Soapy.   But this Chloe’s first international trip.   After walking across one of the three international bridges between El Paso, Texas and Juarez, Chihuahua, Mexico, this was our first view of Juarez.

Not a busy street at the moment.   Many people were interested in Chloe.   She is a pretty dog.   Some wanted to pet her and some were afraid of her.   Our moms watched her very closely.  She is not used to many new people.   But Chloe was wonderful and it seemed like everyone loved her.   We thought this was unusual.

It is not often we see  a statue of a rhinoceros on a patio.   We could not go inside the building with Chloe, so we are not sure what that was about.   US dollars can be exchanged for Mexican pesos. 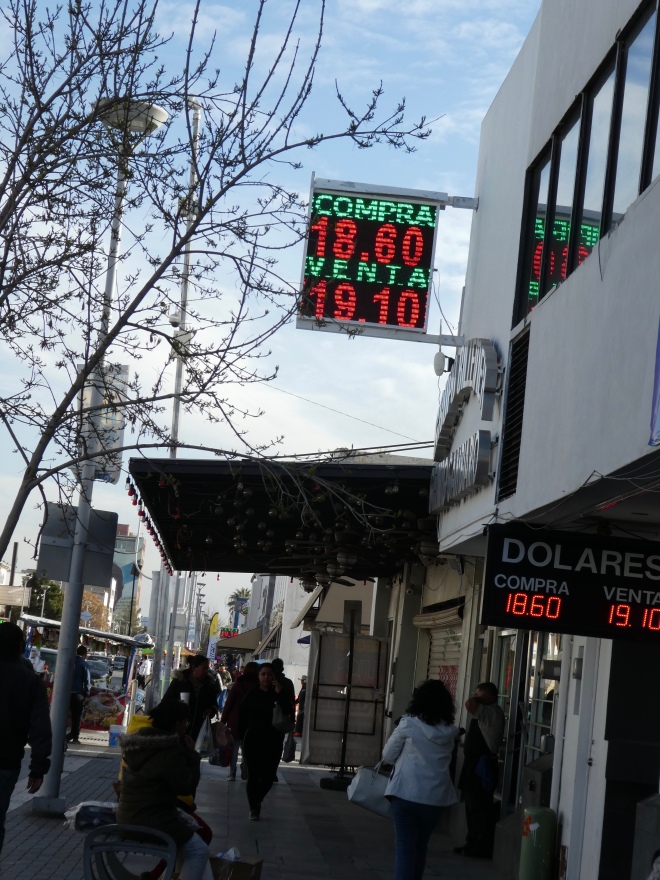 One US dollars gets 18.60 Mexican pesos.   But only exchange what you will spend.   If you want to sell pesos to repurchase your US dollars, you must pay 19.10 pesos for a dollar.   We were only here for a short time, so we did not exchange any money.   We did not find any restaurants with outdoor patios that were open, so we purchased street tacos from a vender.   We paid in US dollars, so the price was a little higher, but we were fine with that.

We wanted 3 tacos, but we got 3 orders of tacos, about 12.   We ate a lot and gave some tacos to people on the street.   The tacos were delicious.   And a little messy.  The humans decided Chloe had been here long enough, so we started back across the bridge to El Paso, Texas, USA.

Chloe and Soapy’s mom heading back to USA

From the bridge we could see the Rio Grande.   The river separates Mexico and the United States.  The bridges are quite long.   We enjoyed the walk and looking down at the river and the international border.   This is a very busy border crossing area, with 3 major bridges.  In 2017, each day about 20,000 pedestrians, 35,000 cars and 2,500 cargo trucks cross from Mexico into the US.   That is traffic for each day of the year.   This area is called the world’s largest international border metroplex.   The border between the US and Mexico is 1,954 miles (3,145 km) with 48 official US-Mexico border crossings.   Within these 48 border crossings are 330 ports of entry.   The border also extends several miles into the Pacific Ocean and the Gulf of Mexico.   In January 2009 there were over 580 miles (930 km) of border barrier in place.

Looking back from the US into Mexico, there is a lot of traffic on this one bridge, cars waiting to enter El Paso, Texas.  There was no problem getting Chloe back into El Paso, Texas.   The friendly agents were waiting for her.   We all had a great time in Juarez, even though it was a short visit.   We hope you cross borders and visit new places.   It is fun and we always meet nice people.

2 thoughts on “Juarez, Mexico with Colorado Traveling Ducks and Chloe”