While Santos drove us from Trinidad to Cienfuegos, Alejandro answered our questions about life in Cuba.  He also told us about Benny More, a famous Cuban musician from Cienfuegos.   Benny More is often considered the greatest Cuban popular singer of all time.  He possessed a fluid tenor voice, which he colored and phrased with great expressivity.  Benny More formed and led the leading Cuban big band of the 1950s until his death in 1963.

Here I am with Benny in Cienfuegos. 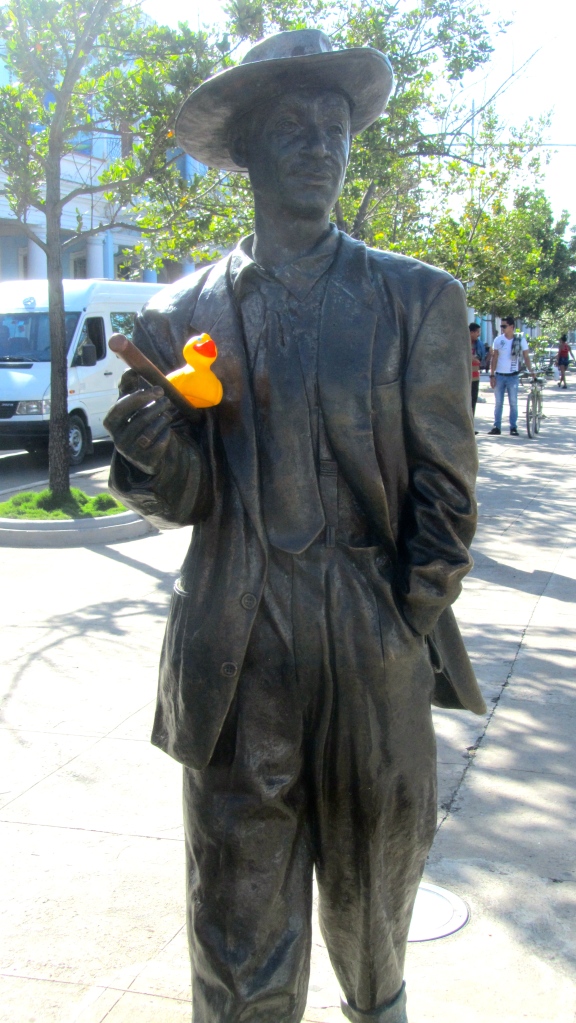 Benny More and Zeb the Duck in Cienfuegos, Cuba

I am sitting on the end of Benny More’s signature cane.  That is not a cigar under my feathers.

Walking through Cienfuegos, I liked this mural.

This is some of what I saw on the street. Notice the telephone booths.

A main street in Cienfuegos

So many friendly people.

We stopped in the Hotel la Union.  Such a pretty hotel.  This restaurant was inviting,

but mom said we were having lunch later.    She purchased a couple bookmarks.  One is still marking pages in our Cuban guidebook from Lonely Planet.

Jose Marti Park is very nice.  I especially liked this tree with the bumps on the trunk.

By Jose Marti Park in Cienfuegos

Here I am with Jose Marti, a revolutionary and philosopher.

Jose Marti and Zeb the Duck in Cienfuegos, Cuba

Cienfuegos was founded in 1819 by Don Louis D’Clouet, a Frenchman from Louisiana.  Others followed but the settlement was destroyed by a hurricane in 1821.  The city was rebuilt and named Cienfuegos after the then governor of Cuba.  In 1957 officers at the local naval base staged a revolt against Batista sealing the place of the city in revolutionary history.

In 2005 UNESCO named the center of Cienfuegos the best example of 19th entry early Spanish Enlightenment in urban planning.

This is one of several old colonial buildings in Cienfuegos. 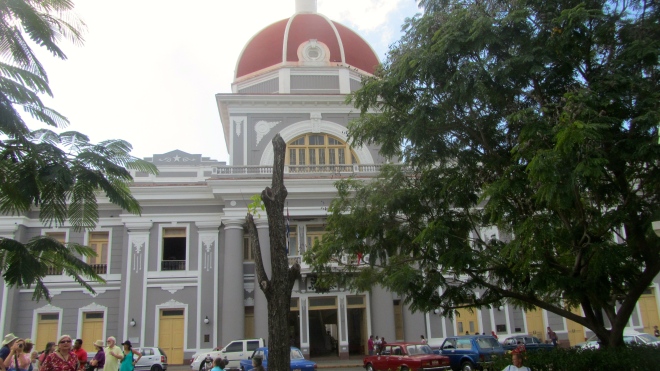