Leaving Havana, Santos drives us along the coast.  As you can see, there is not much traffic.

We are going to Santa Clara.  In Santa Clara, founded in 1689, we will visit the Mausoleum and monument of Che Guevara.  We will enjoy a buffet lunch and then attend a performance by the children.

The remains of Ernesto “Che” Guevara and some of his fellow combatants were brought to Cuba, from Bolivia, and are in the mausoleum.

Also in this complex is a tribute to Che with his possessions and a photographic chronicle of his life.

The mausoleum complex contains a 22 foot bronze statue of Che 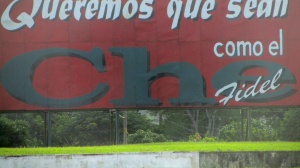 Chavez of Venezuela is our best friend

Che was killed in Bolivia in 1967, but October 17, 1997 his remains were brought to Cuba and he was buried here with full military honors.  This ceremony was witnesses by hundreds of thousands of Cubans, who enjoyed the singing of school children, a speech by Fidel Castro that was followed by a cannon salute.

Taxis in street of Santa Clara

We, humans and Duck, enjoyed a buffet lunch in Santa Clara at Los Caneyes Hotel.

The music was nice,

the food was tasty 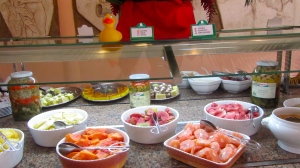 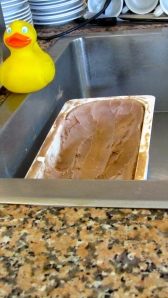 and the waiters were friendly. 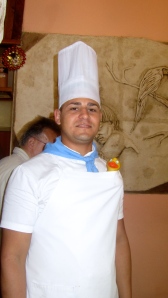 That is a wonderful combination!

After lunch we were entertained by the children of Compania Teatral Infantel, the Children’s Theater Company. 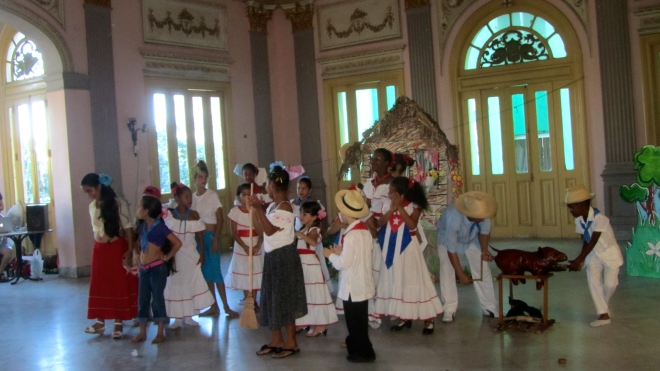 Leaving the theater, I liked seeing the kids in this cart.

Outside the theater, kids in cart by plaza. Cobblestone street

The cobblestone street and the plaza are very nice.  We like Santa Clara.